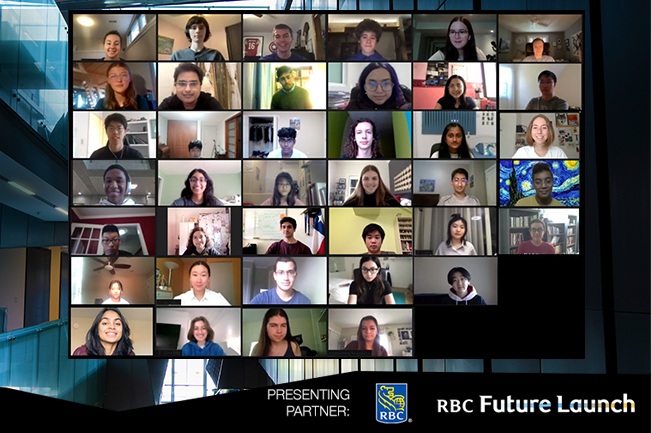 For two weeks this summer, a group of 40 physics-loving high-school students from across Canada and around the world gathered online to talk about black holes, cosmology, and quantum mechanics. They discussed cutting-edge ideas with Perimeter educators and scientists. They collaborated on projects and activities that addressed a broad variety of theoretical physics challenges.

Maybe, though, the real breakthrough was the friends they made along the way.

“I grew up watching Star Trek and Cosmos. I really enjoyed thinking and learning about how the universe works,” says Winnipeg-based Gina Bilic. A recent high-school graduate, she will start a physics degree at the University of Manitoba this September. She says the summer school gave her experiences she couldn’t get through solo learning.

“I can go on YouTube and learn stuff on my own,” she says. “But collaborating with these international students and the teachers was something extraordinary. I met kids from Spain and Dubai. We’re interested in the same stuff, but we all have different experiences.”

Students attended from as nearby as Waterloo, Hanmer, and Brampton, Ontario, and from as far away as Chile, South Africa, and Hong Kong.

“I realized I wanted to study physics when I was in the sixth grade,” says Luanna Quinalha, a 15-year-old student from Curitiba, Brazil. “It was pretty incredible the way they taught us in this summer school. The way they designed thought experiments was brilliant. General relativity is one of my favourite topics. We learned about world lines and spacetime diagrams and special relativity, so that we could really understand why Einstein arrived at his conclusions.”

Kelly Foyle, Perimeter’s Outreach Scientist, ran this year’s International Summer School for Young Physicists. She says the summer school attracts students who are already “hooked on physics” and want to push their knowledge beyond what they can get from popular science books.

“Many of the participants are the only physics-loving students at their school. The summer school lets them find the community they’ve been seeking,” Foyle says. “They get a chance to talk with researchers in different fields and meet like-minded students. We take them as far as we can into some of the big questions in physics.”

Given the program’s traditional reliance on hands-on activities and in-person bonding, organizers were concerned last year when the pandemic pushed the school into online instruction. But thanks to the creativity, dedication, and adaptability of students and instructors, the transition has been more successful than anyone anticipated. The virtual format lowered geographic barriers and increased overall accessibility, without diminishing the ability for students to discover and build the community they’d been seeking.

“I can go on YouTube and learn stuff on my own. But collaborating with these international students and the teachers was something extraordinary.”

All the students interviewed said they formed bonds with their classmates that will last long into their careers.

“We got to know each other. I made a lot of friends,” says Seifeldeen Fahmi, an aspiring astrophysicist from Tanta, Egypt. “We had to think critically, to discuss our results with each other before we shared them with our mentors.”

They are already anticipating how the friends they made this summer might one day be their colleagues and collaborators.

“The program allowed a whole bunch of us who think similarly about this very specific subject matter to connect,” says Hassan Elshabasy of Calgary, Alberta, who is starting an honours physics degree at the University of Waterloo in the fall. “A lot of students from the program are going to UW next year as well. So we’ll stay in touch with each other, and also with people at the Perimeter Institute.”

Career mentorship is a major component of the summer school, with students making connections and learning about options for pursuing jobs in physics. The activities went so well this year that organizers are considering keeping the virtual program in place even when travel is once again safe and permitted.

In addition to differences in geography, culture, and background, students arrived at the summer school with varied skills in different aspects of physics. Some were stronger in math, and others had particular interests in, say, cosmology or quantum physics. Students and teachers concurred, though, that passion and enthusiasm were the most reliable predictors of success.

Foyle says the best thing students can do – both as they apply and if they get accepted – is to let their excitement for physics shine.

“Don’t be intimidated or afraid to dive right in,” she says. “The goal is to share the excitement of cutting-edge physics – that’s the real driving force that moves the field forward.”

ISSYP is funded by the RBC Foundation in support of RBC Future Launch.