The Event Horizon Telescope, the globe-spanning network that captured humanity’s first image of a black hole, has now peered deep into a brilliant fireball half the universe away.

A distant quasar – a pulsating firestorm burning brighter than a trillion suns, half the universe away from Earth – harbours a supermassive black hole. And we can now see it with unprecedented clarity, thanks to a team of researchers from the global Event Horizon Telescope (EHT) collaboration.

The EHT team conducted the highest-resolution measurements yet of a quasar called 3C 279, using the same interconnected global array of telescopes they utilized to capture the now-iconic image of a black hole, published in April 2019.

By linking multiple telescopes with split-second timing to observe the same phenomena simultaneously, the EHT harnessed its unprecedented observational power to produce a better look inside the quasar – improving on previous observations by a factor of five to 10.

“This is not just an evolution, but a revolution,” says Avery Broderick, leader of the EHT Initiative at Perimeter Institute, where he holds the Delaney Family John Archibald Wheeler Chair, and an associate faculty member in the Department of Physics and Astronomy at the University of Waterloo.

“This is the beginning of us making movies of black holes.”

The EHT team reported their findings about the quasar in a paper published this week in Astronomy & Astrophysics. Broderick was one of the paper’s primary authors, and the project also included Perimeter Associate Faculty member Ue-Li Pen, postdoctoral researcher Hung-Yi Pu, former postdoctoral researchers Roman Gold and Jorge Preciado-López, and several PhD students.

Broderick and his colleagues developed the tools to extract the data from the EHT observations and characterize the violent inner life of the quasar. Using these new computational tools, they produced geometric models that correspond to the quasar’s motion over the week-long EHT observation period.

“And we fit the data directly from the EHT array with this time-dependent structure,” said Broderick. “It’s the first time that’s ever been done.”

The above animation shows the three highest resolution images ever taken of 3C 279. The first image comes from the Very Long Baseline Array (VLBA), the second from the Global 3mm VLBI Array (GMVA), and the third from the EHT. “This is not just an evolution, but a revolution,” says Broderick.

The work of Broderick and his team illuminated some interesting physical phenomena. 3C 279 is a prototypical “blazar” – a supermassive black hole that happens to be aligned such that the powerful jets it launches into the surrounding universe are pointed toward us. This results in extreme fluctuations in brightness and the appearance of extremely hot, bright, high-energy emissions. The physics behind these astrophysical jets is not yet fully understood.

Due to the (sometimes unexpected) ways the jets move during the EHT observation period, scientists were able to deduce valuable information about the behaviour of some of the universe’s most puzzling phenomena. They have resolved the core of 3C 279 to reveal two structures (where they only expected to see one), each moving extremely fast – more than 99.5 percent the speed of light. Notably, those two structures do not appear to be aligned, which could indicate a bending of the jets.

Lead researcher Jae-Young Kim of the Max Planck Institute for Radio Astronomy compared the finding to opening up a series of ever-smaller Russian dolls, and always finding something new and fascinating in each one.

“Every time you open a new window to the universe you can find something new,” he said.

“The combination of the transformative resolution of the EHT and new computational tools for interpreting its data have proved revelatory,” added Broderick.

Perimeter Institute Director Robert Myers said the EHT collaboration is a “remarkable example of what is possible when scientists work together across borders and boundaries to tackle grand scientific puzzles. This worldwide team of researchers is combining new observational techniques with theoretical insight to understand black holes and other astrophysical phenomena in ways we could barely imagine just a generation ago.” 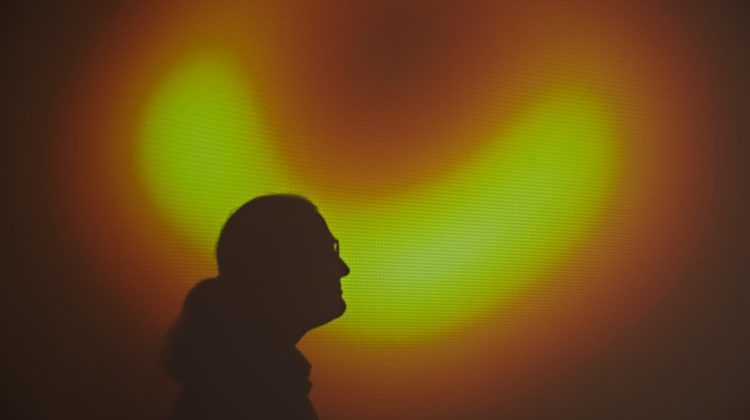 Science writer Ian O’Neill explores the remarkable scientific ingenuity and collaboration required to capture humanity’s first glimpse of a black hole — and what comes next.

Could Black Holes Have Hair?

Perimeter researchers are trying to find out how far one can tweak general relativity and still end up with the universe we observe. Their method? Adding “hair” to black holes.