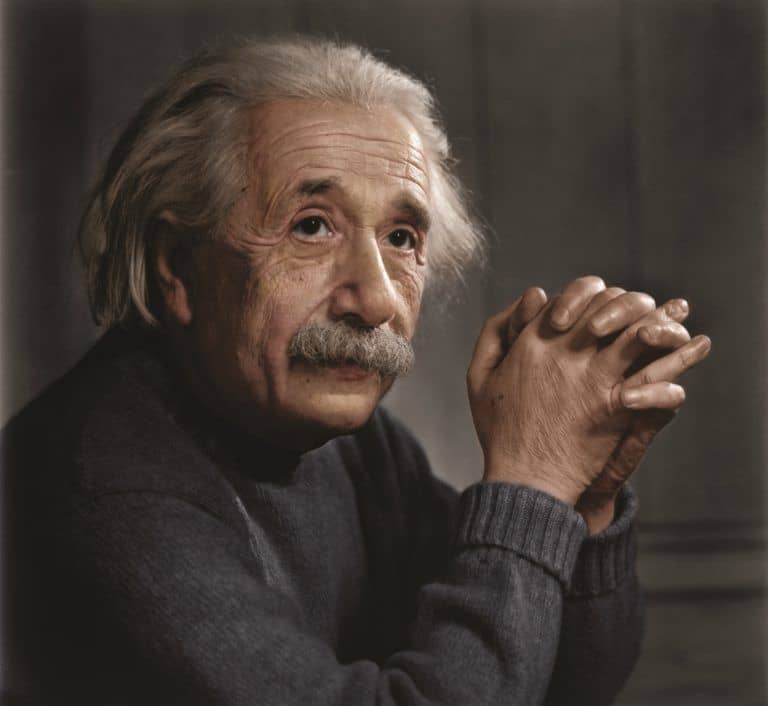 When I study the papers of other great physicists, such as Galileo, Kepler, Maxwell, Bohr, Heisenberg, Schrödinger, and Dirac, I can understand who they are. They are extremely good scientists, but not different, in kind, from the best of my contemporaries. Einstein is different. (Newton is also different, but they are the only two.) After many years of study, I still find Einstein’s unerring, surefooted ability to penetrate right to the heart of things to uncover the secrets of nature incomprehensible.

How did he do it? What makes Einstein different from the rest of us? What made him different from his contemporaries, and allowed him to make discoveries that others couldn’t? With hesitancy, due to my appreciation of the subtlety of his thought, here is a tentative answer: Einstein was a storyteller.

Einstein asked different questions than his contemporaries. They were content to live with knowledge that was incomplete and, to a greater or lesser degree, contradictory or incoherent. There is nothing wrong with this. Most scientists, then as now, have other fish to fry – other goals than seeking the greatest coherence in our knowledge of the universe. But Einstein did science to satisfy a deep need to understand himself placed in a coherent universe. He disliked the patches and wrinkles in the fabric of physics.

He had, for instance, a storyteller’s suspicion of coincidence. Newton had two notions of mass: inertial mass (or resistance to force) and gravitational mass (or weight). But the two masses always turn out to be equal. For everyone else, this equality of gravitational and inertial mass was just an extra condition to be imposed on the equations. For Einstein, this was a tremendous opportunity to discover a hidden coherence. Maybe, from the right point of view, gravity and inertia are the same.

He found that perspective in his thought experiment about a man in an elevator, unable to tell if he is sitting still on the surface of the Earth or pushing upward in empty space. This is the equivalence principle, which holds that you cannot tell the difference between an effect of gravity and an effect of inertia. It is, at heart, a story, and it is the key to general relativity.

There is a myth that Einstein was a lonely genius who followed beautiful mathematics to discover his great theory – genius inspired by aesthetics; mathematics as a tool of prophecy. But, in fact, Einstein was neither very well educated in mathematics, nor very good at it. Nor did he work without collaborators. He depended on friends such as Marcel Grossmann to explain to him the mathematics on which general relativity is based, and he depended on other friends, such as Michele Besso, to find the correct interpretation of the mathematics.

What Einstein excelled at was physical intuition and insight. His path to general relativity was brightly illuminated by a simple physical idea: the equivalence principle.

Unfortunately, Einstein had no physical insights to guide his search for the uniting of quantum mechanics with gravity, which he called unified field theory. He had no new physical principles to propose, no new thought experiments to provoke his thinking. Unlike each of his prior successes – special relativity, photons, Brownian motion, and general relativity – Einstein was working without guidance from his formidable physical intuition. He was running, as Jackson Browne sings, on empty.

In the absence of a new story to tell, Einstein fell back on mathematics as his guide. He constructed a myth about how mathematical beauty had been prophetic for his invention of general relativity, and he attempted to use it to justify his forays into unified field theory. He became sadly lost there, and those who followed him into the swamp were lost, too.

Einstein succeeded when he was able to formulate a principle or hypothesis about nature, which he, or sometimes others, later expressed in mathematical terms; he failed when he attempted to use mathematics as a substitute for insight into nature. You can indeed use mathematics to unify gravity and electromagnetism (in fact, I know of at least four ways to do so). But in the absence of a physical insight or principle explaining what the unification means, experimentally, the mathematical unification is empty.

So as we celebrate the birthday of general relativity, let us admire the Einstein who achieved that great step: a pragmatic but determined seeker after coherence; a physicist who had an unmatched power of insightfully getting to the hidden story at the heart of natural phenomena.