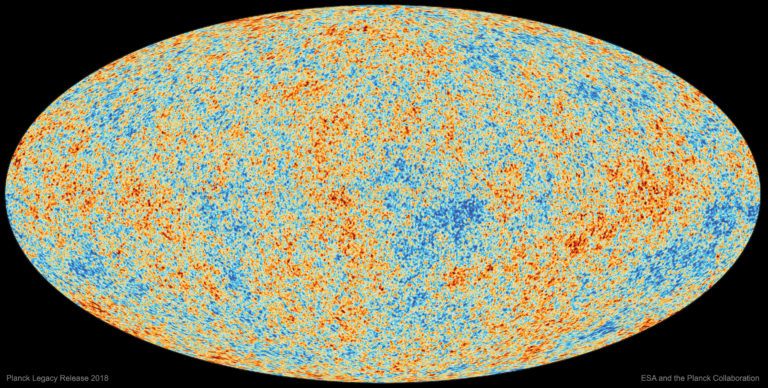 A team of more than 60 researchers from the Atacama Cosmology Telescope collaboration has demonstrated a new technique to measure the mass of hyper-distant galaxy clusters using the oldest light in the universe: the cosmic microwave background (CMB) radiation.

Galaxy cluster mass — one of the key components in explaining the structure and history of our universe — is notoriously difficult to measure. All the stars, planets, dust, black holes, and gas in a galaxy add up to only a small part of its total mass. The remainder comes from dark matter, which has mass but isn’t detectable via direct observation.

Physicists use a technique called “gravitational lensing,” which relies on indirect measurements to help calculate the cluster’s total mass, including its dark matter. Gravity bends light: the greater the mass, the larger the distortion. Since the 1980s, researchers have inferred the mass of galaxy clusters from the degree to which they create tiny distortions in the light from other galaxies behind them.

But what happens when you study the outer reaches of the observable universe?

“This technique gets really difficult the farther the galaxy clusters are, simply because you find fewer galaxies behind them,” says Perimeter P.J.E. Peebles Fellow and senior postdoctoral researcher Mathew Madhavacheril, who co-led the research with Cristobal Sifon from Pontificia Universidad Católica de Valparaíso in Chile and Nick Battaglia from Cornell University in Ithaca, New York.

“But the CMB, the most ancient light we can see, is a backlight for every galaxy cluster in the universe.”

The Atacama Cosmology Telescope team includes theorists, data scientists, hardware instrumentation and calibration specialists, and other experts. Together, they have used an alternative technique, which makes it possible to analyze the properties of representative galaxy clusters as they looked when the universe was much younger, using light radiation that originated before the first galaxies ever formed.

“Because light takes time to reach us, and these galaxy clusters are so distant, we’re seeing them as they looked more than 7 billion years ago,” Madhavacheril says. “But the CMB is even older and extends even farther.”

The CMB was created when the universe was only about 379,000 years old, hundreds of millions of years before the first stars and galaxies formed. While it looks different now than it did then, the CMB is everywhere in the modern universe. Its ubiquity and uniformity make it possible to observe tiny distortions caused by gravitational lensing from distant galaxy clusters. The distorted patterns in the CMB allow researchers to infer the average mass.

The researchers showed how their data, gathered from a large area of the sky, do more than extend mass measurements to more distant galaxy clusters: those data also increase the range of galaxy cluster masses that can be measured. Traditional galaxy lensing experiments are challenging to begin with and require powerful observational instruments like the Hubble Space Telescope. Researchers tend to use their limited time and resources to study only the most massive clusters, where they are likely to get detections of distinctive spiral lensing patterns.

Measuring distortions in the CMB, though, doesn’t require pointing a telescope in a single, precise direction. Ground-based telescopes that scan wide swaths of the night sky generate a flood of revealing data about more typical galactic clusters.

“If you pick the most massive clusters out of the sample to do your lensing measurement, you don’t get representative data; it will skew high,” says Madhavacheril. “With a CMB survey that covers half the sky, you don’t have to do this cherry-picking. You have data for all clusters, regardless of how massive they are. So the measurements you get will be more representative.”

Galaxies and galaxy clusters tend to get bulkier as they age, both by attracting mass from neighbouring regions and through collisions and mergers with other galaxies or clusters. Being able to analyze these distant, young, less massive clusters not only reveals new insight into the structure of the ancient universe, but also tells scientists more about how the universe evolved from then until now.

“Mapping out this invisible matter and measuring cluster masses is a key step in figuring out why the expansion of the universe is accelerating,” Madhavacheril says.