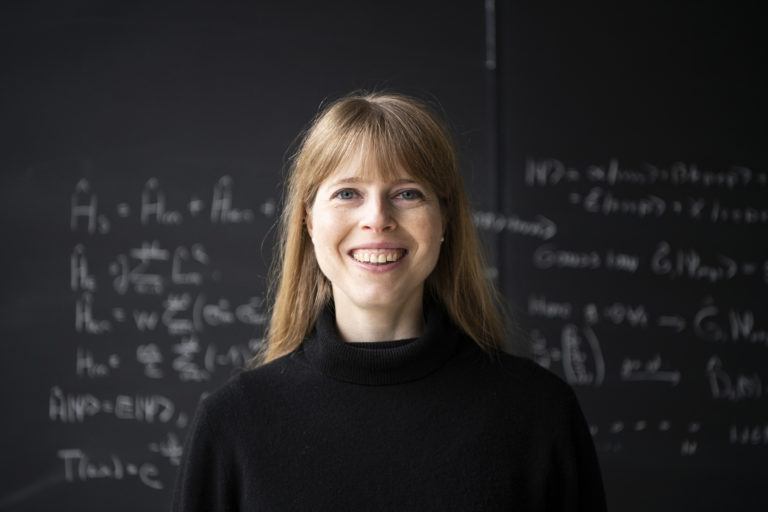 When Christine Muschik was completing her PhD in the 2010s, the privilege of running an experiment on a quantum computer required the kind of money, fame, or insider connections few early-career researchers could muster.

“If you had an idea, it was very difficult to get it implemented on hardware. Hardware development was just crazy expensive,” says Muschik, who is now an associate faculty member at Perimeter Institute, cross-appointed with the University of Waterloo.

As a theorist with great interest in moving from the whiteboard to real-world experiments, Muschik continually strained against technological and logistical restrictions. At every opportunity, she pushed to advance both the science and the technology.

“We want to have quantum simulations that work not only on paper, but that also lead to proof-of-concept demonstrations. This is why we work with experimental teams: To make it real. To bring it to life in the lab,” she says.

A decade later, quantum hardware has advanced more quickly than anyone could have imagined. Quantum tech is still in its early, fragile, somewhat experimental stages, but it has become much more accessible, freeing Muschik’s curiosity and intellect.

“We’re all surprised by the rapid acceleration of hardware development,” she says. “It’s happening because industry – the Googles and the IBMs – are getting on board and pumping a lot of money into it. Everybody is hunting after the ‘quantum advantage.’ For our last publication, we just ran the program we needed on an IBM cloud-based quantum computer.”

A 2019 report in Nature estimated that private investors in North America and Europe had poured at least $450 million (USD) into quantum technology start-up companies in the preceding two years. (Similar information was not available for China, which has become a powerhouse of quantum technology.)

Many of these start-ups are racing with each other, and with established tech giants, to achieve “quantum supremacy,” an industry term for the milestone of a quantum computer solving a useful or interesting problem that is impossible for classical computers. The term is ambiguous (Google claimed they had achieved quantum supremacy in 2019, but critics disputed it) and also deceptive: Quantum supremacy does not mean that quantum computers take over from conventional computers. Each is suited for different types of computational challenges.

Muschik has been working to combine the best of both.

“She understands both the intricacies of complex theories and the subtleties of experimental implementation,” says Raymond Laflamme, the Mike and Ophelia Lazaridis John von Neumann Chair in Quantum Information at the Institute for Quantum Computing in Waterloo. “She is very hands on in both areas, which makes her stand out.”

Muschik has developed new computational approaches that squeeze more power out of existing quantum technologies and flow the results into a feedback loop with classical processors, creating increasingly capable hybrid systems. While this work will inevitably make waves in the commercial tech sector, she is more interested in using these tools to create new knowledge.

“The whole guiding theme of my group involves one question: What if quantum computers could help us to make new scientific discoveries?” she says. She’s interested in questions about matter and antimatter, the inner workings of neutron stars, and other mysteries that conventional computers haven’t been able to solve.

“The models beyond the Standard Model are freaking difficult. Standard methods cannot tackle them.”

Hybrid computing systems offer new approaches to simulation and analysis that can move fields from cosmology to particle physics forward. But even before she begins exploring questions from other fields, Muschik’s core work in developing such systems already helps advance a central challenge that has confounded theoretical physicists for decades: reconciling quantum mechanics and classical physics.

Each of these powerful theoretical frameworks does a great job of describing the universe from a specific perspective: Quantum mechanics covers the subatomic world of protons and quarks. Classical physics describes the macroscopic world of people and planets. Each provides an accurate and precise description of the same physical reality, as seen from a different point of view.

But each is inconsistent and incompatible with the other.

Quantum-classical hybrid computers send information back and forth between these contradictory frameworks, using both to solve problems and run simulations with implications for the aerospace industry, drug discovery, financial services, and many areas of scientific research.

“It’s all about how you formulate the problem,” she says. “You take a question like ‘Why is there more matter than antimatter?’ You reformulate your question in the form of an optimization problem. I teach my quantum core processor to analyze this problem and spit out numbers. And classical computers know how to deal with numbers.”

“We play a dual role, not only simulating the physics now, but also focusing on method development for future quantum computers,” she says. “This is how you pave the way to scale it up for future generations.”

Muschik oversees the Quantum Simulations of Fundamental Interactions initiative, a joint venture of Perimeter Institute and the Institute for Quantum Computing at the University of Waterloo. Among other things, her lab is developing the technology to simulate forces and particles that extend beyond the Standard Model of particle physics. The rapid advance of quantum computers over the past decades has made it much more possible to simulate quantum fields and fundamental forces that the Standard Model can’t explain.

“And you can say, ‘Ok, we should give up.’ But this is a tremendous opportunity. Quantum computers right now are too small, but they have tremendous promise to answer these big, deep, open questions.”