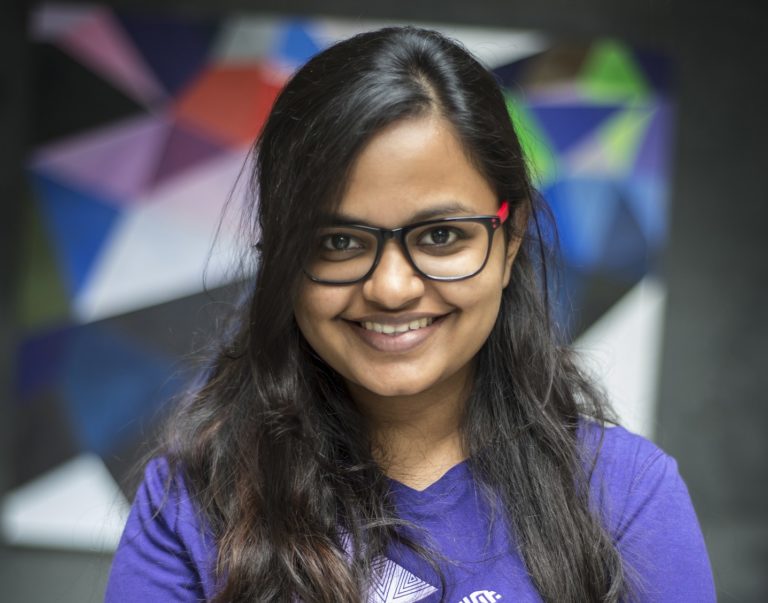 It’s -30° and the wind is whipping the ice fragments in the reflecting pool into miniature tornados. It’s ridiculously cold even by Canadian standards, and by all rights, Sonali Mohapatra – who’s from tropical Bhubaneswar, India, and who currently studies in the mild climes of Brighton, UK – should be shivering. But she leans into the Perimeter Bistro window, looking right at home.

In fact, visiting Perimeter is a homecoming for Mohapatra: she was the valedictorian of the Perimeter Scholars International (PSI) class of 2015. Now a PhD candidate at the University of Sussex, she’s returned to PI to launch a new research collaboration on the questions raised by the thermodynamics of black holes and fundamentals of quantum spacetime. She says she’s “obsessed with gravity.” Gifted, disciplined, educated, and creative, Mohapatra is obviously a physicist – or at least someone who’s well on her way.

But Mohapatra, at home in many worlds, refuses to be only a physicist. She’s a singer and a poet. She founded and edits a queer-feminist international literary magazine called Carved Voices. She works on the Athena SWAN program, the UK-wide effort to bring more diversity into higher education and research environments. She is a sought-after motivational speaker focusing on issues of gender and academia.

She’s never been one for staying inside the lines.

“When I was in second grade, there was a huge science exhibition happening in my school,” Mohapatra remembers. “It was from fourth grade to eighth grade – second graders weren’t supposed to be there.”

But with encouragement from her mom, Mohapatra had put together an experiment involving magnets, and she and some of her second-grade friends muscled into the science fair. “In the beginning, we were told, ‘What are you all doing here? This is not open for you.’ But all of us actually won something. I won a science fiction book. I still remember it. It was a beginning.”

Mohapatra did her undergraduate work in India, at the prestigious IISER-Kolkata. (The IISERs, or The Indian Institutes of Science Education and Research, are a group of premier science education and research institutes in India, founded about 10 years ago with the intent of leading the country in the field of basic science.) “I was in the fourth batch of students. I did a dual bachelor’s and master’s degree there – we were all basically trained to do research.”

Towards the end of her time at IISER, Mohapatra heard about Perimeter’s innovative one-year master’s program, PSI. Again, a book set her on her path.

“I wrote to Carlo Rovelli, who actually wrote back to me,” she says. The Italian theorist is one of the foundational thinkers in quantum gravity, and has written best-selling books on QG and other topics in modern physics. Rovelli was also one of PSI’s lecturers, teaching quantum gravity to the 2012/13 class. He recommended that Mohapatra look into the program.

She did her PSI essay in quantum gravity with Freidel, and became valedictorian of the 2014/15 class. But the winter of 2014/15 – which featured a polar vortex and several days below -50° – was a bit much for her. She’s at the University of Sussex now, working on effective theories of quantum gravity. She continues to collaborate with Freidel: “The relationship with Laurent was a wonderful motivational feedback loop of ideas and inspiration,” she says. She is looking to finish her doctorate in June, and applying for postdoctoral positions.

A woman in academia

The path ahead looks academic, but Mohapatra is aware that it won’t be easy.

“I give a lot of motivational talks on academia and gender, and how the personal and the academic intersect,” she says. She has thought deeply about these issues, and worked to unpack them, noting (for instance) that often men are subconsciously taught one thing, and women are taught the opposite, even if they read the same text.

“I will give you an example,” she says. “When we study about the stories of ‘great’ men, we learn about things that they have done which are great and good. While we might also learn about their bad behaviour towards women or minorities, these are perhaps briefly criticized and then brushed under the carpet. We drive home the lesson that this great man is still great.

“When I read that, and a boy who is sitting next to me reads that, we get two different messages. I will get the message that if a person does this to me, he can still be a great person. And a guy can hear that ‘I can still do this, and become great.’ He’s learning that he can do this, and I am learning that I have to take this.”

Programs aimed at getting women and girls into science often take an approach of trying to foster greater enthusiasm for science. Mohapatra comes armed with statistics which show that enthusiasm is not the problem. Rather, she says, we need to understand the huge amount of mental and emotional work that goes into pushing back against that what are you doing here question – the one she first heard in second grade – and recognize how easy it is to internalize the question as self-doubt.

Mohapatra believes this should be explicitly taught: “There should be modules for undergraduates that talk about our research ecosystems, and the barriers that exist.” People who might feel uncomfortable about lifting women (or other groups) up, she says – especially since many people have the wrong rhetoric that they are “helping” demographics who have no talent of their own – are generally all for knocking barriers down.

And when it comes to making admissions or offering positions, Mohapatra believes that we need to change the definitions of merit. “What women or minorities – for example – go through to reach a high level of accomplishment is different from what men go through to reach that same level,” she says.

Mohapatra recounts instances where her act of asking questions – so central to being a scientist – was taken as a demonstration of ignorance. While some senior men offered encouragement, collaboration, and support, others would talk over or take over her ideas. She almost gave up on academia. None of this is unusual for women in science.

She argues that it’s reasonable to take formal note of the fact that – for example – most women applying for a postdoctoral position have a second, unspoken PhD in proving themselves and handling discrimination. “We do not have to account for this on a case-by-case basis,” she says. “It’s a pattern. We are physicists. We are meant to be good at spotting patterns.”

What’s next for the young scientist? She wants to continue her work on feminist issues in academia. She is searching for a publisher for her second book of poetry – “mostly romantic queer-feminist poetry,” she says, “but sometimes I write poetry about physics – it’s beautiful how they all come together.” The third issue of her magazine is coming out.

She’s busy, but she’s not giving any of it up: “Even though you need super specialists in every field, the distinction between the literary side of a person and the scientific side of the person has always seemed to me artificial,” she says. “You study everything until you’re 18 and then somehow you are supposed to choose only one aspect of your existence. It didn’t make sense to me. It still doesn’t.”

And of course, there is the next academic step.

“I am applying for postdocs, mostly in black hole thermodynamics, quantum gravity, and quantum information theory, and how those fit together,” she says. “But I’m also applying for a few unconventional postdocs on interdisciplinary fields such as cognition, intelligence, complexity, and evidence-based policy making.”

Research is a transferable skill, so Mohapatra could take her expertise and apply it there. She already has a sub-problem in mind: “One particular aspect that interests me is gender in AI. The demographics of the coders and kind of sample data sets you use to train your AIs can influence how they develop.” She recounts how Amazon’s recruitment algorithm, as well as Microsoft’s Tay, failed on various fronts; they were simply duplicating pre-existing biases in the world. People don’t realize how easy it is to outsource human bias into to an AI, she notes.

At the moment, she’s keeping this unconventional, though still academic, path open. But whether she studies artificial intelligences or black holes, she expects to continue to be interested in the big picture. “The evolution of human relations, how and what human beings think are the most important values in our society – that’s evolving continuously,” she says. “I’m very much interested to see how that keeps changing.”

Don’t be surprised if you see her leading the change.