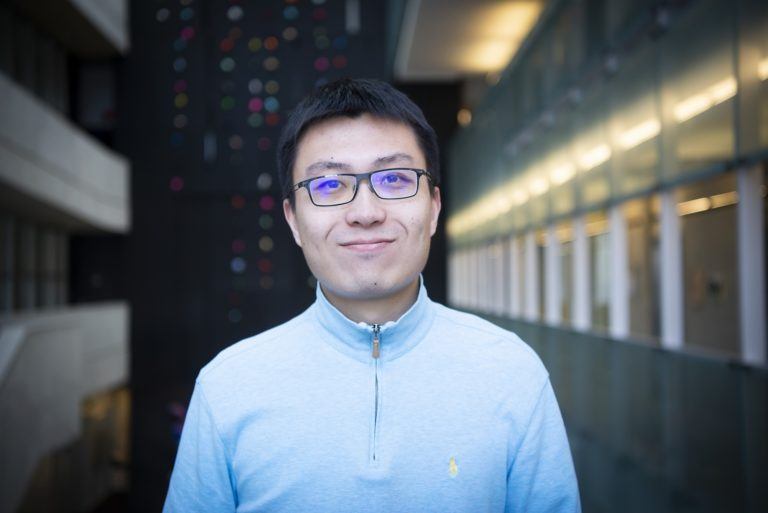 When talking about condensed matter, the potential technological spin-offs often get the most attention. After all, the field holds out the promise of loss-free energy transmission, room-temperature superconductors, scalable quantum computers, and more.

For budding theoretical physicists, though, condensed matter research can be a hard sell. The problem looks ugly, the challenges are difficult to explain, and the sheer complexity of many-body quantum systems is too tough for our best supercomputers to simulate.

But if you stick with it, says condensed matter theorist Chong Wang, something amazing can emerge: beauty.

It took some time for Wang to see that allure himself. As a child, he liked science and math but felt no particular affinity for one thing. By high school, in his home town of Zunyi, China, he was leaning toward studying string theory. It wasn’t until late in his undergrad studies, at the Hong Kong University of Science and Technology, that he got deep enough into condensed matter research to realize that he found it absolutely fascinating.

Part of the problem, he notes in retrospect, is that to fully appreciate condensed matter, you need to first understand it. And that isn’t easy.

Unlike cosmology or string theory, in which a budding scientist can grab hold of simple and fascinating problems to pursue, in condensed matter “it takes some effort to actually understand the question,” Wang says.

“I don’t know if ‘acquired taste’ is the right word,” he laughs. “It was only at my later stage of college that I realized that condensed matter physics, very often, is about the study of the emergence of beauty. This idea of beauty emerging out of ugliness, that really drove me into the field.”

From Hong Kong he went to MIT for his PhD, to Harvard as a postdoc, and has now come to Perimeter Institute as a Faculty member. He is part of a growing focus on “quantum matter” at the Institute, joining other promising young researchers busy probing nature’s quirkier building blocks.

The strangeness of condensed matter

“Condensed matter” and “many-body quantum physics” encompass some of the strangest phenomena in some of nature’s most complex systems.

Traditionally, scientists figure out how a complex system works by calculating one small part and extrapolating across the whole. Just as a baker making various kinds of cookies would start with a basic recipe, then mix in different flavours, a scientist assessing a complex quantum system might first work out what the individual particles are doing, and extrapolate that across the system to form a base. Then they’d start adding “real world” effects between the particles, like attraction, repulsion, and interference, to slowly build complexity into their calculations.

However, that approach doesn’t work for the systems Wang studies. These systems are simply too weird, the emergent behaviours too strange, to understand by incrementally adding complexity. Instead, they must be approached on their own terms, he says.

“Experimentalists see weird behaviours from those materials all the time,” Wang says. “Many of the phenomena are poorly understood by theorists, actually.”

One phenomenon scientists do understand quite well – at least in its most basic aspects – is called the “fractional quantum Hall effect.” For Wang, it provides the perfect example of condensed matter’s strange allure.

“If you put zillions and zillions of electrons together and they move collectively, then the collective motion behaves as if it’s a one-third electron, or one-fifth electron,” Wang explains. “You never understand [this behaviour] from a single electron point of view. It’s the emergence of the many-particle motion. It’s a very weird behaviour, but it’s also a very simple pattern.”

The math structure that governs this kind of emergent behaviour is called topological quantum field theory, which Wang describes as “one of the most beautiful math structures out there.”

“What’s particularly intriguing about this final picture is that it looks completely different from your microscopic building block, where you think of electrons moving independently,” he says. “It’s a complicated, messy problem, but very often at the end, a very beautiful picture emerges. It’s a miracle that simplicity can ever emerge from something so complex.”

His research probes some of the stranger regimes in many-body quantum physics, such as quantum spin liquids, topological insulators, quantum Hall effects, quantum phase transitions, and their connections to modern aspects of quantum field theory like anomalies and dualities.

Unlocking these puzzles is a challenge, but it’s also a huge opportunity for Wang and his colleagues in Perimeter’s Quantum Matter Initiative as theory and experiment push each other to better understand nature.

“For a theorist, your daily life has two goals: one is to get the most beautiful structure for your theory; the other is try to explain the most puzzling experiment,” he says. “Very often, the two goals run in parallel, but occasionally, they meet. Then something awesome happens.”