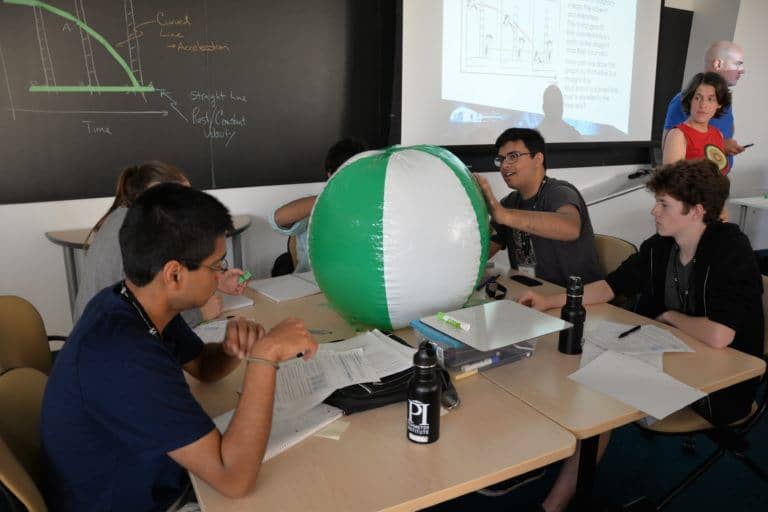 A half-dozen oversized beach balls, each as plump as a prize-winning pumpkin, bounce about the classroom.

Like most beach balls, they practically beg to be volleyed by playful palms, and the students giddily oblige.

Unlike most beach balls, however, these ones are about to illustrate one of the most mind-boggling and important discoveries in science.

“OK, folks,” the teacher hollers over the commotion. “No more beach party. To fully explain Einstein’s concept of gravity, we’re going to adapt it to something that’s curved.”

This is what the students really came for: to learn some serious physics.

Forty teenagers from all over the world have gathered at Perimeter Institute for the annual International Summer School for Young Physicists (ISSYP) – a kind of two-week physics boot camp. The teacher is Kevin Donkers, an educational consultant at Perimeter who knows that physics is a subject best learned by doing.

This morning’s session is about scientific models, and how various models can help us explain (or, in some cases, fail to explain) the phenomena we observe and experience. The beach balls have come into play to illustrate a thought experiment in which one person (Alice) falls off a ladder, with someone else (Bob) standing nearby.

Using strips of painter’s tape and some arts-and-crafts prowess, the students bedeck the beach balls with perpendicular axes depicting time and space, and vertical strips to depict the ladder (just as they had done on the two-dimensional surfaces of their desks earlier in the lesson).

“This is the time axis,” says 17-year-old Joscelyn van der Veen, applying a strip of the sticky green tape to the ball while her classmates hold it still. “We need to keep this axis straight – this is science!”

The big question: will the beach ball version reveal something different than the version on the surface of the desk?

The answer, the students discover, is yes. Depicting the scenario on the ball shows that time should “tick differently,” as Donkers puts it, at the top of the ladder than at the bottom.

This time dilation is a hallmark of Einstein’s general relativity and is, among other things, what makes GPS technology work. The demonstration shows that Einstein’s “acceleration” model helps explain something that another model, the “force” model of Newton, does not (and the beach balls provide a handy depiction of curved spacetime).

For these students, some of whom have travelled from as far away as Tunisia and Singapore to attend the camp, such hands-on activities bring physics to life in ways that textbooks do not.

“I’ve always loved physics. I find it really fascinating not just to learn from the curriculums, but to extend that deeper and think about the more abstract concepts in the universe,” says 18-year-old Kiri Daust from Smithers, British Columbia. “There aren’t really many opportunities, at least in my high school, to do that.”

It’s a sentiment echoed by his ISSYP classmates, who sometimes struggle back home to find peers who share their passion for physics.

“Here, you don’t feel like an outsider if you are enthusiastic about physics or have other interests in science or math,” says 18-year-old Kishan Makwana from London, UK. “This experience has definitely motivated me to pursue physics at university and beyond.”

Over the two-week camp, the students are fully immersed in all things physics – from quantum mechanics and cosmology to a trip deep underground at SNOLAB, a Canadian neutrino observatory. They receive mentorship from Perimeter researchers, work on team research projects, and experience the day-to-day workings of a theoretical physics research hub.

Many of them are determined to pursue physics and mathematics in university, and ISSYP is structured to give them a leg-up in those pursuits. Others have not yet decided what path they’ll choose, but credit ISSYP for helping them think big and challenge themselves.

“I’ve learned how much I don’t know, and I’ve realized that is not an obstacle,” says 18-year-old Lola Hourihane of Dublin, Ireland. “It just encourages me to keep learning more. The best thing I’ve learned is what I’d call the physicist’s outlook – to be motivated in the pursuit of knowledge.”

“My career goal is to be a theoretical physicist, so it’s really great to be in an institute full of theoretical physicists. This is the kind of place I’d like to work someday. Seeing all these other motivated people makes me much more inclined to follow a problem all the way through, and makes me even more passionate about finding solutions.”

“ISSYP has been one of the most amazing things I’ve ever done. I’ve had the idea for a long time that I want to do physics – but now, I’m pretty certain. I’m so excited to go home and re-read the physics books I haven’t read in a while.”

“My experience has been absolutely phenomenal. People from all over the world are here, so it’s super-neat to be able to talk with likeminded people from tons of different countries.”

“You explore your own personality, your interests, and your passion. I was surprised by how beautiful physics can actually get.” 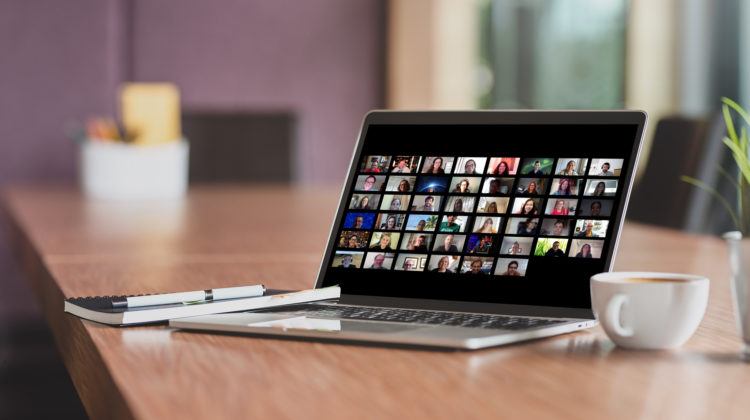