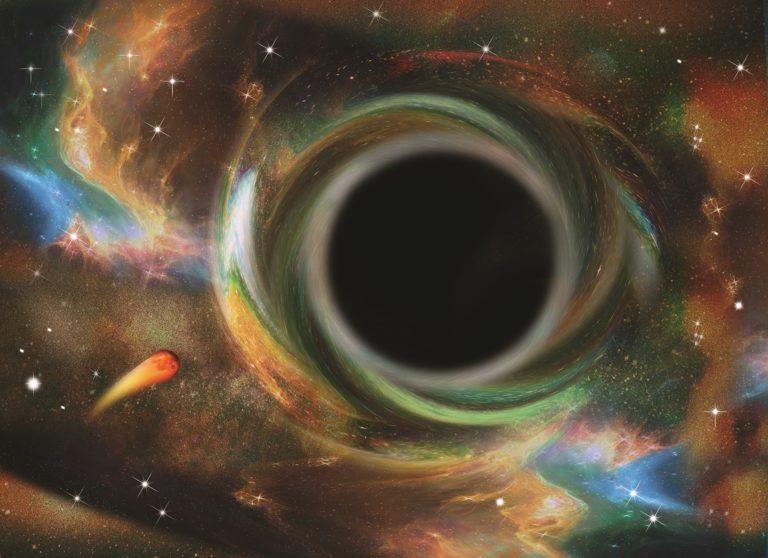 You’ve seen them in science fiction and popular culture: black holes as “cosmic vacuum cleaners,” sucking in planets, stars, and other space debris on a wanton path of destruction.

But what if I told you that the Earth’s moon could be replaced by a black hole of the same mass (say, by some trickster alien race) and not a whole lot would change for us? Life on Earth would carry on pretty much as normal.

Black holes, it turns out, aren’t all that scary. That’s because they don’t have any sort of special “suction” power to gobble up matter. Their only pulling force comes from plain old gravity, the same force that keeps the moon in orbit and keeps us stuck to the Earth. The strength of the gravitational force between two objects only depends on their masses (bigger mass equals a stronger force) and the distance between them (smaller distance equals a stronger force) – so replacing our moon with an equal mass black hole wouldn’t increase the gravitational force. That moon-mass black hole would be all but invisible to us, so we wouldn’t have the moon lighting up most nights, but its gravitational effect on Earth would be just like the moon’s, pulling water around in tides as Earth turns.

Black holes are still some of the most intriguing objects in the universe, though. Here’s what we know so far: a black hole is a thing that is so dense, with so much mass packed into a small space, that it warps spacetime around it to an extreme degree. Now, Earth warps spacetime, too (and so do you, at least a teensy bit), but black holes warp it so much that nothing can escape once it has entered – not even light, the fastest and, indeed, “lightest” thing in the universe. That “point of no return” is known as the black hole’s event horizon. Once a photon passes the event horizon, as far as we know, it is lost forever; light can’t pass through black holes or be reflected by them. That’s why black holes are, well, black. Really, really black.

Any amount of mass could get turned into a black hole if you squished and compressed it enough. To turn the moon into a black hole, you’d have to squeeze it to about the size of a grain of sand. There are a few ways we think real black holes are created. One of those ways is when a very massive star runs out of fuel to power its fusion and gravity overcomes the other forces as the core collapses. Black holes formed in this manner are known as “stellar mass” black holes.

Finally, miniature or micro black holes (much smaller than stellar mass black holes) are hypothesized to exist, but so far, we haven’t found them. They would require outside pressure to form, since their masses are too small for gravity alone to create them. The universe was very dense in its early stages, so scientists think it would have been an ideal place for these sorts of black holes to form.

Physicist Stephen Hawking argued that – thanks to quantum mechanical effects that come into play on very tiny scales – black holes can actually lose mass in a process known as “Hawking radiation.” It would take stellar mass and supermassive black holes more than a septillion years to lose all their mass (that’s many times the age of the universe!) via Hawking radiation, but micro black holes (if they exist) would evaporate almost instantly.

There is still a lot to learn about black holes, and scientists are discovering more every day. Experiments like the Event Horizon Telescope are sure to shed more light on these fascinating dark objects.