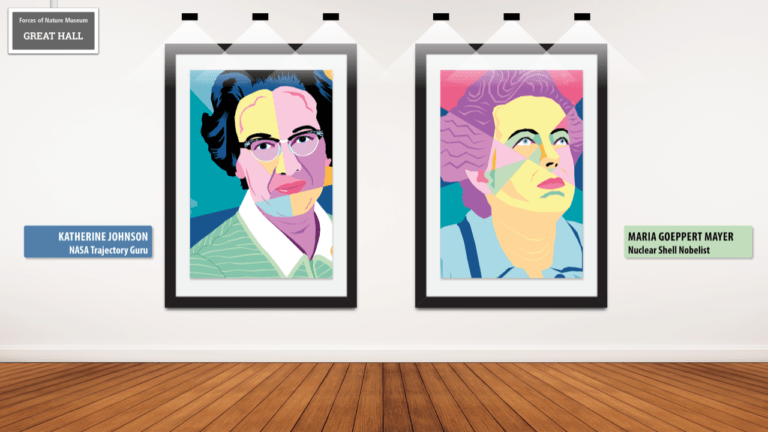 Picture this: You are accidentally locked inside a museum.

The only way out is to use the information in the museum as clues to solve puzzles that will, eventually, unlock the doors.

You’re in the Forces of Nature Museum, which contains portraits of women who have made great contributions in mathematics and physics – women such as Katherine Johnson, one of the Black mathematicians whose story was told in the 2016 film Hidden Figures. You learn about the forces needed to make rockets fly and discover that Johnson calculated trajectories for Apollo 11, the first mission to land humans on the Moon. With that, you get the code to enter the next room.

It could easily be the theme of one of the many popular escape rooms that have cropped up in cities around the world, where people work together as a team to solve time-limited puzzles. But the setting might surprise you.

The Forces of Nature Museum escape room activity, which can be played using a series of downloadable posters and online interactive slides, is one of the ways Perimeter Institute is bringing interactivity and diversity to classrooms around the world.

“It is all about the amazing women in science through the years. Their contributions have been vast,” says Sean Jackson, a high school science and physics teacher at Kitchener-Waterloo Collegiate.

The newer resources include posters, slides, short YouTube videos, and online activities that are used to engage students in topics such as black holes, particle physics, optics, and quantum theory. There is also a “Tools for Teaching Science” resource for teachers.

According to Marie Strickland, Perimeter’s associate director of educational outreach, more than 4,000 Canadian teachers and 6,000 international teachers are using the resources in 130 countries. It is estimated that the resources, geared to students from Grades 5 to 12, are reaching about 10 million students every year.

Jackson credits Perimeter’s resources for helping to dramatically transform the physics classroom since he began teaching in the early 2000s.

“The learning environment is not teacher-centred any longer. There are round tables, lots of activities. Students watch the lecture online, and they come into the classroom to work together in solving problems,” Jackson says.

And while physics classrooms of the past tended to gloss over the contributions of women, minority groups, and people from non-Western cultures, the materials today are much richer in their diversity. The Forces of Nature Museum activity is one example of that.

Science discoveries today are happening at lightning speed. Perimeter’s Educational Outreach team works year-round to refresh educational material and incorporate the latest science, adding content inspired by research breakthroughs such as the discovery of the Higgs boson or the historic picture of the M87 black hole from the Event Horizon Telescope.

“Every year, we go through a process of trying to identify what would be most helpful to teachers,” says Dave Fish, currently the teacher-in-residence at Perimeter.

Teachers themselves will sometimes suggest a topic for a new activity or resource, but educator involvement doesn’t end there. Feedback from teachers continually guides the development of new resources, says Kelly Foyle, an outreach scientist at Perimeter. 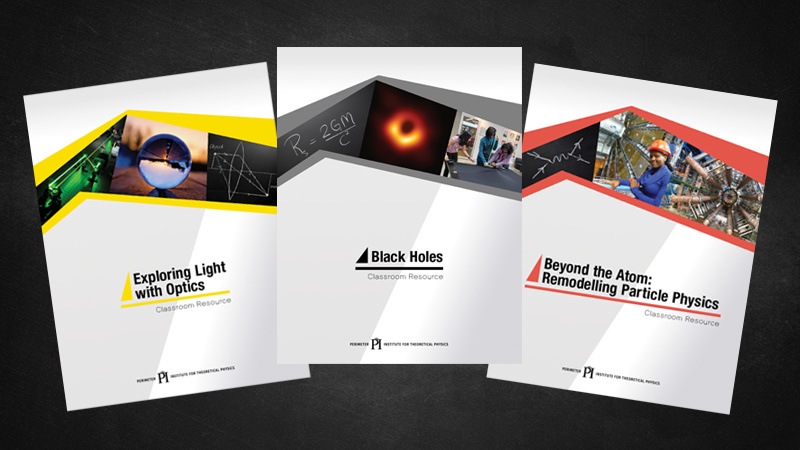 “Teacher reviewers will read through the resource and test it in their classrooms. Then they can say, ‘I did this with my students and this is what happened.’”

The pandemic of the past two years was hard on teachers and students. During the months when schools were closed because of the pandemic, Perimeter’s Educational Outreach staff was busy migrating resources intended for in-class use to the online environment, Fish says. Teacher feedback about how well those online resources were working was vital, since the Perimeter team couldn’t go into schools to test the activities, he adds.

Foyle says Perimeter itself is a rich resource, with its renowned science faculty and frequent visiting researchers: “We have a lot of deep knowledge here about physics. I see our role as tapping into that so that we can share that with teachers.”

Contemporary science pushes the boundaries of human knowledge and explores the unknown. That process is naturally exciting to students. Teachers often want to share the latest scientific breakthroughs with their classes, but they need support, as the information is so new that it wasn’t available when they did their teacher training. “As a physics institute, we can provide that support,” Foyle says.

Fish says he too has seen the curriculum across Canada changing since Perimeter started creating educational resources more than 15 years ago. Dark matter, for example, wasn’t in the curriculum in the past. Now, students can do a lab to calculate the value of an unknown mass, drawing connections to how astronomers measure the speeds of stars in galaxies as compelling evidence for dark matter.

Saara Naudts, a physics teacher at Mayfield Secondary School in Caledon, ON, says Perimeter and its resources have fundamentally changed the way she approaches the teaching of physics.

Naudts says 2011 was a pivotal year in her career development. That’s when she attended EinsteinPlus, a one-week intensive workshop at Perimeter for Canadian and international high school teachers who are looking for ideas on how to teach modern physics – including quantum physics, special relativity, and cosmology.

After that, she began heavily using Perimeter’s resources in her classrooms. “I felt like a convert. I thought, “Oh, my gosh, this is how I’m supposed to teach, which is very different than the way I was taught,” says Naudts. The approach of just memorizing formulas doesn’t address the needs of the learners, she adds.

Students are still learning physics basics such as momentum and electromagnetism, and they are still using algebra. But in connecting the students to modern science such as the discovery of the Higgs Boson, those concepts become relevant and meaningful to them, Naudts says. “It shows them that what they are doing in Grade 12 has a purpose.”

The resources help teachers seed the inspiration in students, she adds. “I think my job is to plant a lot of seeds, and hopefully some of them will sprout.”

Naudts did her master’s research on bridging the gender gap disparity in science, technology, engineering, and mathematics (STEM). Diversity is a topic that is close to her heart.

She appreciates that Perimeter provides resources such as the Forces of Nature activities and posters of women scientists. She has downloaded the posters and put them up on her classroom walls, along with the posters of Albert Einstein and other physicists the students are more familiar with. She wants the students to see that a diversity of people can be successful in physics.

“We need to disrupt the stereotypes about STEM that come from the media, parents, and sometimes the students themselves,” Naudts says. “People tend to think of scientists as men in white lab coats, working in a dungeon and doing weird science by themselves. Or, they tend to think of physicists as socially awkward, like in the TV show Big Bang Theory. We need to disrupt that image.”

Part of the goal for Perimeter’s Educational Outreach team is to build a talent pipeline for future researchers, starting at a young age.

But even if they don’t become physicists, Naudts says the subject helps students develop problem solving skills, analytical thinking skills, collaboration, and communication skills: “Physics is like a vessel for teaching those skills that are useful whether you become a physicist, a lawyer, or anything else. The skills are transferable. That is the beauty of physics.”

Naudts says she is extremely grateful that these important outreach resources are being funded and are freely available for teachers to download.