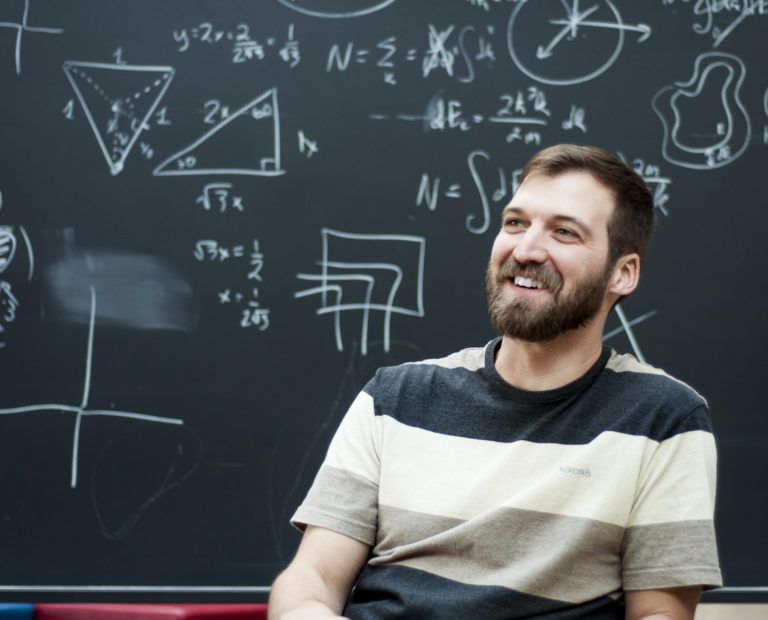 Although I didn’t realize it at the time, I first started thinking about quantum mechanics while trapping muskrats
when I was 10 years old.
I grew up in The Pas, Manitoba. Every Saturday when I was young, my father would fuel up his old snowmobile, attach a rickety red sleigh full of snares, traps, and supplies, and pile us kids aboard for a ride into the frozen swamps in search of muskrats.

As many Northerners know, muskrat homes are reedy domes jutting out of the frozen swampland, like tiny beaver lodges. Muskrats enter and leave their homes through a hole into the water below the lodge, safe from predators like mink and foxes.

Trapping muskrats requires skill and patience. As my father taught us, you must carefully cut a hole out of the side of the lodge with an axe, set the trap (a non-trivial feat with bare hands in minus-30 conditions), and plug the newly cut hole, packing it tightly with snow and grass so that the muskrat’s access hole from the water doesn’t freeze. Hopefully, when the muskrat comes back, it senses no disturbance in the home that it built, and steps into the trap.

Upon returning to the traps the next morning, I’d keenly watch, barely able to contain my excitement, as my father cut into a reed lodge. From the outside, it was impossible to know. No internal disturbance around the trap would be detectable through the thick reed walls. They were usually empty, but my father would occasionally reach into the house and retrieve a frozen muskrat, sending us kids into wild celebration as we anticipated a cozy afternoon of skinning and stretching pelts around the wood stove, while regaling our mother with the story over hot chocolate.

I sometimes thought, if I wished hard enough, right then and there, the universe would decide that we deserved a successful catch. Indeed, since no one or thing (except maybe the lucky or unlucky rat) knew the outcome before the house was cut, when exactly did the universe make that decision? If I wished hard enough, could I change the outcome, right up until the moment my father stuck his hand into the house?

Herein lies the paradox of “Melko’s muskrat”: until the moment we cut into the lodge, the muskrat could be either alive or dead. And that meant it was, in some hazy way, both.

As I grew up, I came to understand that the muskrat was caught by the trap (or not) sometime in the middle of the night. Or so I thought, until I learned about quantum superposition during an undergraduate physics class, which opened my mind to a different way of thinking about the possibilities.

It turns out that the basic laws of quantum physics, governing tiny objects like atoms and electrons, can allow these objects to live in the superposition of two different states simultaneously. I wondered if muskrats could be the same, both trapped and free at the same time in the middle of the night. An electron only chooses its state when a “measurement” is made. Perhaps, I wondered, the act of cutting into the reed lodge is a “measurement” that decides the muskrat’s fate?

As I found out, this alive/dead paradox even had a name, “Schrödinger’s cat,” which suggests a cat that is both alive and dead in a box. (I still find the circumstances behind the cat’s predicament much less plausible than the muskrat’s.)

I now research quantum mechanics, computer simulation, and information theory. The paradox of the muskrat is just one of many counterintuitive ideas that I struggle with every day in the mind-bending world of quantum mechanics.

As a theoretical physicist working at Perimeter Institute and the University of Waterloo, I travel the world to work with other researchers, on solving puzzles such as superconductivity, black holes, artificial intelligence, and quantum computers. As a professor, I get to teach a younger generation of physicists all the things that, on my journeys, I found to be curious, hoping that they will see the same big, fascinating universe that I do.

Yes, the path to success is lined with hard work and repeated failure, but curiosity is a powerful force. Don’t be afraid to explore, ask questions, read difficult books, and think crazy ideas. Growing up in the North taught me that you can come from anywhere, and go anywhere, with science.

Just remember to make it home for some of mom’s muskrat stew every once in a while.

Roger Melko is a Perimeter Associate Faculty member. A version of this piece was originally published in the Winnipeg Free Press in April 2017.