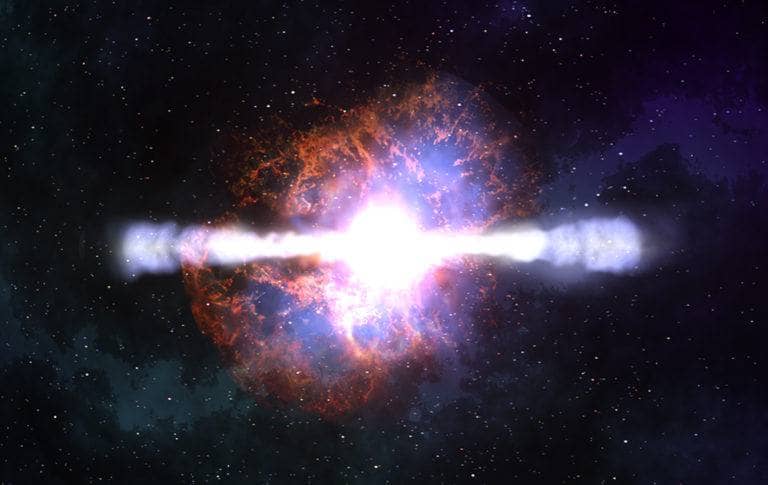 All the stars in the sky will eventually die – and some will really go out with a bang.

When a dying star goes supernova, it explodes with such ferocity that it outshines the entire galaxy in which it lived, spewing material and energy across unimaginable distances at near-light speed.

In some cases, these cosmic cataclysms defy expectations, blasting not symmetrically in all directions – as an exploding firework might – but instead launching two narrow beams, known as jets, in opposite directions.

Understanding how these jets are created is a vexing challenge, but an international research team has recently employed powerful computer simulations to sleuth out some answers.

Their work sheds light on an explosive chain reaction that creates jets and, over time, helps create the structure of the universe as we know it.

“We were looking for the basic mechanism, the core engine, behind how a collapsing star could lead to the formation of jets,” said Schnetter, who designed computer programs for the simulations employed by the research team to model dying stars.

That core engine, the team discovered, is a highly turbulent place. Any turbulent system – like an aging car with a deteriorating suspension on a bumpy road – is bound to get progressively more chaotic. In certain types of supernovae, that turbulence is caused by what is known as magnetorotational instability – a type of rapid change within the magnetic field of a spinning system, like some stars.

Supercomputer visualization of the toroidal magnetic field in a collapsed, massive star, showing how in a span of 10 milliseconds the rapid differential rotation revs up the stars magnetic field to a million billion times that of our sun (yellow is positive, light blue is negative). Red and blue represent weaker positive and negative magnetic fields, respectively. Simulations and visualization by Philipp Mösta.

Prior to the work of Schnetter and colleagues, this instability was believed to be a possible driver of jet-formation in supernovae, but the evidence to support that belief was scant.

Uncovering such evidence, Schnetter says, required a something of a scientific perfect storm.

They assembled the right people and found the computational horsepower they needed at the University of Urbana-Champaign in Illinois.

The team used Blue Waters, one of the world’s most powerful supercomputers, to run simulations of supernovae explosions – simulations so complex that no typical computer could handle the number-crunching required. On Blue Waters, the simulations provided an unprecedented glimpse into the extreme magnetic forces at play in stellar explosions.

The 3D simulations revealed an inverse cascade of magnetic energy in the core of spinning stars, which builds up with enough intensity to launch jets from the stellar poles.

Though the simulations do not take into account every chaotic variable inside a real supernova, they achieve a new level of understanding that will drive follow-up research with more specialized simulations.

Deepening our understanding of supernova explosions is an ongoing process, Schnetter says, and one that may help us better understand the origins of – to borrow a phrase from Douglas Adams – life, the universe, and everything.

The formation of galaxies, stars, and even life itself are fundamentally connected to energy and matter blasted outward in exploding stars. Even our own Sun, which supports all life on our planet, is known to be the descendent of earlier supernovae.

So the study of stellar explosions is, Schnetter says, deeply connected to some of the most fundamental questions humans can ask about the universe. A nice bonus, he adds, is that supernovae are also really awesome explosions.

“These are some of the most powerful events in the universe,” he says. “Who wouldn’t want to know more about that?”

Supercomputer visualization of the toroidal magnetic field in a collapsed, massive star, showing how in a span of 10 milliseconds the rapid differential rotation revs up the star’s magnetic field to a million billion times that of our sun (yellow is positive, light blue is negative). Red and blue represent weaker positive and negative magnetic fields, respectively. From left to right are shown: 500m, 200m, 100m, and 50m simulations. Simulations and visualization by Philipp Mösta.