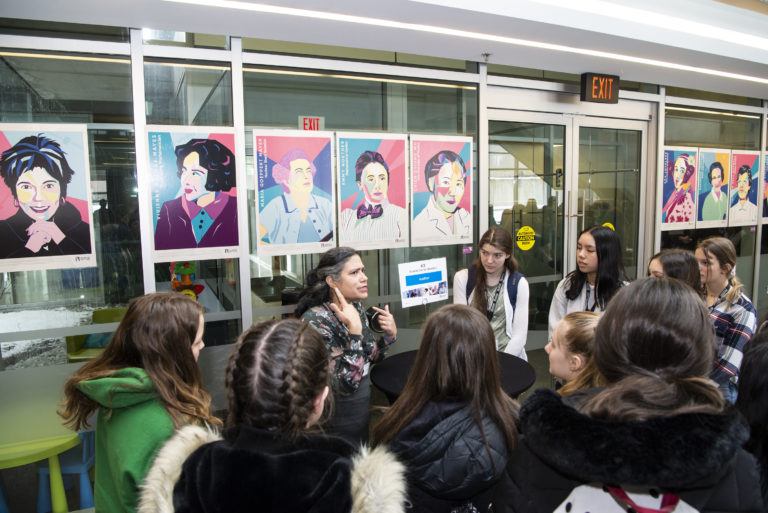 When Cather Simpson speaks to audiences about the advantages of being a woman in science, one line always gets a laugh: “No line-ups for the bathroom.”

Sure enough, it elicited plenty of giggles from the nearly 200 high school girls in Perimeter Institute’s theatre for the annual “Inspiring Future Women in Science” event on March 7.

The punchline, of course, makes light of an unfunny truism in science: women have been historically under-represented in the STEM fields (science, technology, engineering, and mathematics).

Making headway toward correcting that imbalance is the goal of “Inspiring Future Women in Science,” held this year on the eve of International Women’s Day. While there is no quick fix to remedy the entrenched biases and systemic barriers affecting women in science, the annual event aims to give tangible support to young women as they begin to chart their post-secondary careers.

Such encouragement was in great supply from successful women from various sectors who delivered keynote addresses and met with attendees in the “speed mentoring” sessions at the event.

Simpson is a laser scientist and founder of the University of New Zealand’s Photon Factory, which applies ultrashort laser pulses for fundamental research and applications in the agriculture industry. While her “Top 10 Reasons to be a Woman in Science” list is tongue-in-cheek, it also underscores the message that incredible opportunities await young women willing to work through periods of adversity and failure.

That notion of embracing failure was a recurring theme in the keynote talks of the event. Each of the speakers encouraged the students to consider failure as an opportunity to learn and grow.

Varuna Prakash recalled the shame and disappointment she felt when, after being a straight-A student in high school, she struggled to earn Cs and Ds during her first year of an engineering degree at the University of Toronto.

“I felt like a complete failure, and felt a deep sense of shame, like I had let down everyone who had great expectations for me,” recalled Prakash. “But having this failure, and having it so early in my career, was one of the best things that could have happened to me.”

Prakash used the disappointment as an opportunity to pivot into a different branch of engineering, which she found much more interesting and satisfying. From there, she went on to medical school and has since worked for the World Health Organization and Massachusetts General Hospital. “I wouldn’t be here today if I hadn’t failed so spectacularly back then,” she says.

For the teens in the audience – and those watching the keynote addresses in a live webcast – the event was a chance to hear that even the most successful women battled insecurities and barriers in high school and beyond.

“Something that I heard that resonated was that it’s okay to fail,” said 16-year-old Raelyn Marshall, a Grade 11 student at St. Marys District Collegiate and Vocational Institute in St. Marys, Ontario. “It’s okay to not do everything perfect, to learn from everything.”

For Deirdre Finnigan, a 17-year-old Grade 12 student from St. John’s College in Brantford, Ontario, the event provided reassurance that it’s okay to be unsure of your career aspirations.

“A lot of (the mentors) didn’t know what they wanted to do at all in high school, and a lot of them applied to everything,” she said. “I thought it was interesting that a lot of them ended up doing something they had no idea they would end up doing. I don’t know exactly what I want to do, but they were helpful in showing me that it doesn’t really matter if I know or not what I want to do right now – that I’ll get there.”

Watch the keynotes and discussion panel: