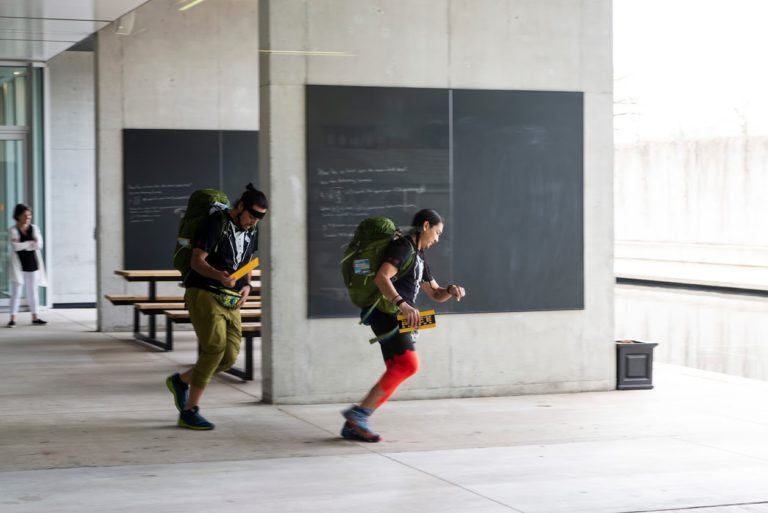 In a challenge that required equal parts brains and brawn, contestants in an episode of The Amazing Race Canada ran Perimeter Institute’s staircases and scrawled at its blackboards to solve a gravitational puzzle.

The episode was recorded this spring at various locations around Waterloo Region — including The Culinary Studio and Waterloo Park — as one leg of the 10-team race across the country. The episode aired on CTV Aug. 13 (and can be viewed on the CTV website), and was shown at free public viewing parties around the region.

At the Perimeter Institute challenge, teams were given tennis balls, a stopwatch, some chalk, a calculator, and a mathematical equation. Their mission: to drop tennis balls from a fourth-storey balcony above the Perimeter reflecting lounge, time the descent to the floor, and use that time to calculate the distance between the balcony and the floor.

Discerning a correct answer — and thus earning the clue for their next destination in the race from judge Kelly Foyle, a Perimeter outreach scientist — required plugging their number into a gravitational equation and remembering some rules of algebra.

Which teams successfully flexed their math muscles, and which ones got left in the (chalk) dust? Watch the episode to find out.

How would you have fared?

We won’t make you run up four flights of stairs and drop a tennis ball. Instead, we’ll tell you roughly how long it takes for the ball to fall from the balcony to the floor: t = 1.64 seconds.

For an extra little challenge, racers had to convert metres into feet (hint: there are 3.28 feet in a metre).

Now, use that information and this equation to solve for distance, in feet, of (d):