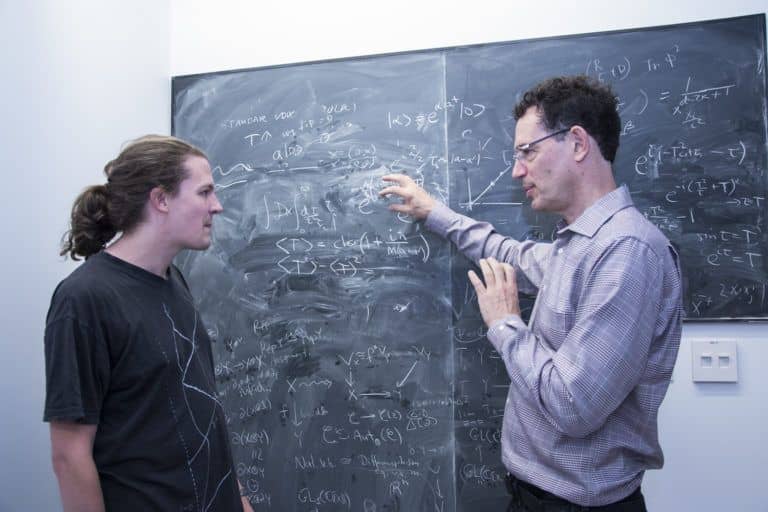 Cosmology has a problem.

The problem begins, as the universe does, with the big bang.

The standard cosmology imagines the universe’s first instant as a singularity: that is, a single point, taking up no space at all, but with all the stuff of the universe inside it. As if all of reality had been divided by zero, the singularity is undefined. It has neither interior nor exterior; it cannot be described. In the face of it, the laws of physics break down entirely.

“This is a problem,” says Neil Turok, cosmologist and director of Perimeter Institute. “The standard cosmology begins with an impossibility.”

Working with Steffen Gielen, a former Perimeter postdoc who is now a fellow at Imperial College London, Turok has cast a fresh eye on the universe’s seemingly impossible beginning. The new research is featured as an Editor’s Suggestion in Physical Review Letters.

Gielen and Turok’s research imagines the big bang as a big bounce – not just the beginning of this universe, but the end of a previous universe. The predecessor universe would have contracted toward a dense state that marked its big crunch end, and our universe’s big bang beginning.

But while that idea is intuitively satisfying – it at least explains where that single point of matter and energy came from – it does not by itself resolve the problems with the singularity. It is still just as impossible, just as indescribable. For all physics can predict, there be dragons.

So how did Turok and Gielen avoid the dragon(s)?

They began by looking at the behaviour of all the stuff present in the early universe. For its first 50,000 years, the universe was dominated by radiation. What matter there was, was at very high energy, and also behaved like radiation. These materials have a special property that turns out to be crucial to this research: they are conformal.

“Conformal” has a precise technical meaning in physics and mathematics, but a shorthand translation might be “does not depend on scale.” Light, for example, is conformal. Light can take the form of radio waves that are kilometres wide, or X-rays that are the width of an atomic nucleus. Maxwell’s equations govern radio waves and X-rays, and make no distinction between them. This is not unique to light: particle physics strongly hints that at very high energy, all matter is likewise blind to scale.

“Our work starts from this observation,” says Turok. “We make the assumption that the early universe is filled with things that have no scale. And then we try to describe a quantum universe that is filled with such material: how does it behave?”

It behaved more simply than the researchers had ever dreamed. They were surprised to discover they could use standard quantum mechanics, with no bells, whistles, or fudge factors added, to describe and predict how the universe grew. Or, winding the film the other way, how it shrinks toward the big bang singularity.

As Turok puts it: “It turns out, to our surprise, that in this very special case, where everything present in the universe is conformal, and all we are studying is the size of the universe, we could quantize the theory exactly, and work out exactly how a universe of one size transitions into a universe of another size, quantum mechanically.”

Describing the growing or shrinking universe is a major accomplishment, but doesn’t slay the dragon. But there, too, the researchers had an idea.

“Quantum mechanics saves us when things break down,” says Gielen. “It saves electrons from falling in and destroying atoms, so maybe it could also save the early universe from such violent beginnings and endings as the big bang and big crunch.”

It turns out that it could.

In the model Gielen and Turok created, the universe approaches the singularity point – and then skips over it. Like a clock that avoids striking midnight by swinging its hands up and out from the clock face, it does this by accessing another dimension.

The “extra” dimension in question is imaginary: it is described by numbers containing the square root of negative one. The quantum universe in this model is described by complex numbers – numbers with both an imaginary and real component. At the point of the singularity, where the clock strikes midnight, it might have no real size, but could still have an imaginary size – and thus still be described by the laws of physics. So the problem of the singularity is resolved, the dragon avoided.

It seems perhaps like a cheat, but imaginary and complex numbers are everywhere in quantum physics. In this work, Turok and Gielen are using the well-established mathematics that describe quantum tunnelling: a quantum mechanical phenomenon in which a particle tunnels through a barrier that is too high for it to clear.

More than a mathematical sleight of hand, quantum tunnelling explains how fusion works in the sun, and is behind established technologies such as tunnelling electron microscopes.

Bottom line: big bounce cosmology – where one universe contracts into a big crunch until another explodes outward as a big bang – is not a new idea. Turok in particular has been a leading proponent of such a cyclical cosmology for more than a decade. But the sticking point has always been the moment of the bounce itself: the singularity.

This new work shows how merely assuming that everything in the early universe was conformal allows one to describe a quantum cosmology that runs the universe backward toward the singularity, smoothly over it, and out the other side. No dragons involved.

No wonder the researchers described their work as “A Perfect Bounce.”