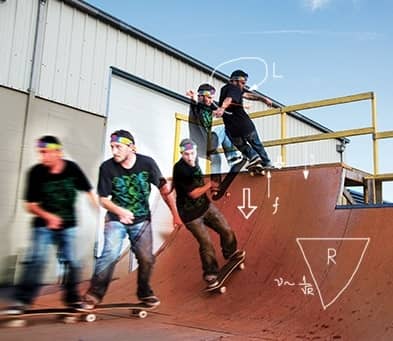 The skateboarder’s t-shirt, drenched with sweat and in constant motion, is difficult to decipher. The white lettering scrawled across its black fabric resembles a jumble of graffiti, or perhaps the logos of skateboard companies.

Only when the skateboarder comes to a rare stop – actually a wipeout (or slam, in the lingo), which leaves a thin layer of his elbow skin on the concrete – does the t-shirt become legible. Legible to the trained eye, that is.

“It’s the equations of the Standard Model of particle physics,” explains David “Doddy” Marsh, apparently unfazed by his quickly reddening elbow. “The shirt’s from CERN.”

He adds: “It’s the only clean shirt I had today.” Then he’s off again, plunging into the concave belly of the skate park before launching skyward from one of its many ramps. He seems to hang in the air, suspended for an extra microsecond as if in defiance of the relentless gravitational force he understands so thoroughly.

In the middle distance behind him, mostly obscured by a grove of poplars, stands his workplace, the Perimeter Institute for Theoretical Physics. It’s where, as a postdoctoral researcher, he spends the majority of his days trying to unravel the mystery of dark matter, the invisible glue of the universe.

Theoretical cosmology is the yin to his skateboarding yang.

For Doddy Marsh (“Only my mum calls me David”), skateboarding and theoretical physics are two halves of his whole – sometimes complementary, sometimes in opposition, both essential.

Just as quantum mechanics and general relativity provide a near-complete framework of reality while their unification remains an elusive moving target, skateboarding and physics simultaneously define and beguile Doddy.

Each of his passions is fuelled by eureka moments of tantalizing success – a new trick mastered, a new solution found to a previously vexing problem – and each offers an inexhaustible supply of new challenges.

His scuffed elbow and battered ankles are analogous to the unfinished papers and half-written computer programs in his second-storey office just down the road – all reminders that there is much more to be learned, more mastery to be achieved.

Doddy careens around a curved wall of the skate park before skidding to a halt at his water bottle. Between gulps, he says something rarely (if ever) heard at skateboard parks: “Today, I was trying to figure out a heuristic explanation for suppression of clustering power of axion dark matter, and how it is related to the densities of dwarf spheroidal galaxies.”

It’s a mouthful even by theoretical physics standards, and it’s just as tricky to explain as it is to say.

He has come to the skate park to wipe clean his mental chalkboard. Sometimes, the most vexing problems are best solved by focusing on something completely different for a while − frontside ollies and smith grinds, in this case.

“Skateboarding teaches perseverance, because it’s damn hard,” says Doddy. “Physics is notoriously hard too, but maybe the fact that I struggle all the time in skateboarding makes struggling with some maths problem seem less consequential.”

On Christmas morning, 2000, 13-year-old Doddy Marsh unwrapped the gift he’d been begging for: his first-ever skateboard. Like countless kids of his generation, his exposure to skateboarding had come through the PlayStation game Tony Hawk’s Pro Skater, and he assumed he’d be replicating its death-defying virtual stunts for real in no time.

He had already shown a natural aptitude for mathematics (both his parents were math teachers, which surely helped), but the ability to calculate a hypotenuse and the ability to boardslide down one, in the form of a real-world handrail, proved quite different. What served Doddy well on both fronts was a dogged, almost obsessive, determination to leave no problem unsolved.

Doddy immersed himself in Liverpool’s legendary skateboarding scene, careening with friends around the endless obstacles provided by the city’s industrial decay. He learned from veterans of the scene at Pier Head, the city’s skateboarding epicentre on the banks of the River Mersey.

He built a makeshift skate park in his parents’ back garden with materials “borrowed” from local construction sites, and filmed videos with his buddies performing ever-more intricate tricks, accompanied by thumping soundtracks of hip-hop and punk.

His studies, meanwhile, never flagged. On the contrary, skateboarding brought mathematics and physics into sharper resolution in his mind.

“When I was about 16, I was learning in school for the first time about simple harmonic motion and resonance and natural frequencies,” he recalls. “That’s when skateboarding first helped me understand a physical concept.”

What he realized is that a skateboarder rolling up and down the sloped walls of a halfpipe is analogous to a pendulum, its tick-tock an expression of its period of oscillation, or natural frequency.

Eventually, he saw that there’s a well-defined (classical) physics concept for something every skateboarder knows intuitively: “Tight transitions are whippy.” The natural frequency is larger when the geometric quantities are smaller – or, put another way, the smaller the pool or halfpipe, the more rollercoaster-like “whip” the skateboarder feels careening around its curvature.

Through his high school years, Doddy poured his energies equally into mathematics and skateboarding, finding ever-deeper parallels between them. Pumping his legs to gain momentum within a ramp became a “resonance response putting energy into a physical system.” Jumps and tricks became experiments in inertia and friction and elasticity. Learning how to fall without breaking his wrist (again) became an experiment in angular momentum and velocity.

Of course, when he’s actually in the midst of a new trick, instinct and reflex kick in, overriding the analytical parts of his brain and firing the reactive, instinctual synapses. It’s that interplay of applied physics and pure physicality that makes skateboarding such a deeply satisfying activity for Doddy.

“It’s meditative,” he says. “When I’m stuck on a problem, I often grab my board and skate. By the time I come back, the answer has made itself clear.”

Every skate park, like every physics problem, poses its own unique set of challenges, its own promise of a new skill or realization.

In the balmy pre-dusk of an August evening, Doddy is in the sleepy town of Wellesley, best known for its annual Apple Butter and Cheese Festival. It is 20 minutes and a world away from Perimeter Institute, where Doddy has spent the afternoon grappling with the detectability of ultra-light axionic dark matter.

The Wellesley skate park – really just a parking lot in which a local skateboarder built an impressive wooden halfpipe – is empty, save for the ketchup-soaked French fries a previous visitor spilled beside the ramp.

Warming up, Doddy glides effortlessly up and down the sides of the halfpipe, like a marble dropped in a bowl. Then, with well-timed pumps of his legs, he drives energy into the physical system, searching for the resonant peak of the ramp’s curved geometry. Moments later, he’s skimming the lip of the ramp.

His goal is to execute a perfect rock ‘n’ roll – a fundamental skateboarding trick in which the front wheels crest the lip of the ramp, the board teeter-totters for a moment at the top, and then plunges back down, preferably with rider intact. He wants to nail it, partly because there’s a photographer present, but mainly because he refuses to leave a self-imposed challenge unaccomplished.

What bigger challenge, after all, could there be than the one he was tackling just an hour ago – explaining the origins, growth, and ultimate fate of the universe?

Maybe his current professional fixation, determining the true nature of dark matter – the mysterious stuff that makes up a quarter of the universe’s energy density – will prove as elusive as the inward heelflip, a trick Doddy has yet to successfully execute.

Then again, the rock ‘n’ roll atop a halfpipe seemed impossible when Doddy rode his first skateboard at age 13, but now, with a giddy yelp of satisfaction, he nails one (and is doubly pleased to learn the camera caught the moment).

He takes a breather atop the ramp, wiping his glistening brow with his left forearm, which is tattooed with a stylized version of the Anti-Hero Skateboards logo. His other arm is currently inkless, but he’s considering having it adorned with the Friedmann-Robertson-Walker metric, which describes the expansion or contraction of the universe.

“That would make for good balance,” he quips, only half-joking.

Skateboarding and physics are the two halves of a complex equation, and Doddy is the equals sign in the middle. There are plenty of other variables in his life, of course – music, art, Buddhism, travel – but they are always calculated against the constants.

That, as the saying goes, is just how he rolls.

“Skateboarding and physics give me very different things in my life, but they come together in really interesting ways.”