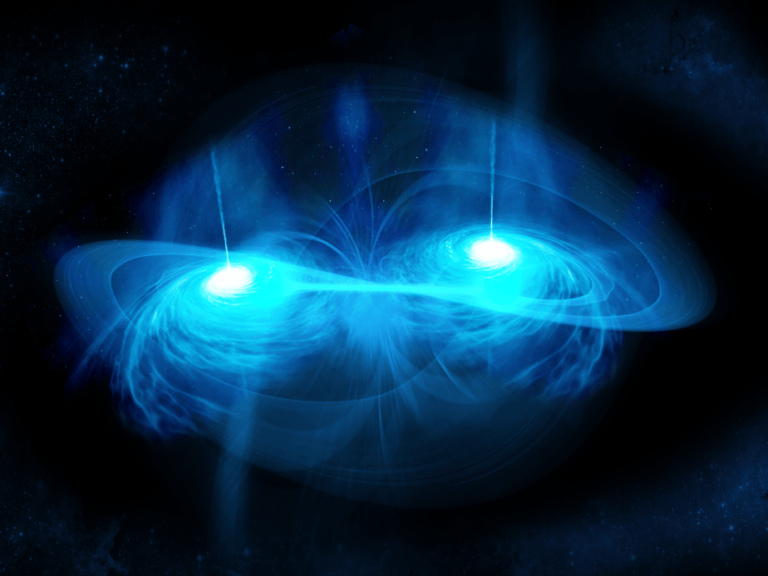 A century after they were proposed in Einstein’s theory of general relativity, scientists have finally verified that gravitational waves and black holes exist.

In an announcement in Washington, DC, on Thursday, scientists from Caltech, MIT, and the LIGO Scientific Collaboration presented strong evidence of their discovery.

“Ladies and gentlemen, we have detected gravitational waves. We did it,” said David Reitze at the Washington announcement.

[Want a science primer? Check out the Slice of PI: Gravitational Waves 101  here.]

In the early hours of September 14, 2015, during an engineering test a few days before the official search was to begin, aLIGO’s two detectors recorded a very characteristic signal.

“It was exactly what you would expect from Einstein’s general relativity from two black holes spiralling and merging together,” he said. “It took months of careful checking and rechecking to make sure what we saw was something that was a gravitational wave. We’ve convinced ourselves that’s the case.”

The gravitational waves were generated when two black holes merged 1.3 billion years ago, he told the gathering of press and scientists.

What are gravitational waves?

Gravitational waves are ripples in the fabric of spacetime, created when two massive objects – such as black holes or neutron stars – hurtle around each other at extremely high speeds and collide.

First put forward 100 years ago as a consequence of Albert Einstein’s theory of general relativity, they have challenged theorists and experimentalists alike as one of the few elements of the theory that had not been experimentally proven. Until now.

“This was truly a scientific moon shot, and we did it,” Reitze said.

LIGO, a system of two identical interferometers constructed to detect the tiny vibrations of passing gravitational waves, was conceived and built by MIT and Caltech researchers, funded by the US National Science Foundation.

The original LIGO experiment ran from 2002 to 2010 as a proof of concept. After significant upgrades to the detectors in Louisiana and Washington, Advanced LIGO did its first observation run in September 2015.

Gabriela González is the spokesperson for aLIGO and a Perimeter Institute Distinguished Visiting Research Chair. She said this effort had taken a long time. “It’s been a long journey,” she told the news conference.

The first detection, at the Louisiana observatory, had a peak value of 10-21 metres. “For four kilometres [the length of the LIGO detector], that’s a tiny, tiny fraction of a proton diameter. That’s incredibly tiny,” said González.

“We know it’s real, because seven milliseconds later, we saw the same thing in the Hanford detector. This is it. This is how we know we have gravitational waves.”

“This is just the beginning,” González said. “Now that we know binary black holes are there, we’ll begin listening to the universe.”

The signal is so strong, the researchers report in a paper published in Physical Review Letters, that it exceeds the “five sigma” standard of statistical significance physicists use to claim a discovery.

Astrophysicist Kip Thorne, who co-founded the LIGO experiment, presented a simulation of the black hole merger that created the gravitational wave.

“The storm was brief – 20 milliseconds – but very powerful,” Thorne said. “The power output was 50 times greater than all power put out by all of the stars in the universe put together.

“Because it was so brief, the total energy was what you’d get by taking three suns, annihilating them, and putting that into gravitational waves.”

A new era for science

Perimeter Institute Director Neil Turok described the discovery as one of the greatest moments in science.

“The LIGO measurement is a spectacular confirmation of not just one, but two of the key predictions of Einstein’s theory of gravity: the existence of gravitational waves and black holes,” Turok said.

“Einstein developed his theory based on clues from experiment and prior theories, but even more on a remarkable intuition that gravitation is due to the bending of spacetime. A full century later, we’re seeing his predictions verified with exquisite precision. This tells us something about the power of the human mind to understand nature at its deepest level.”

Even more than verifying Einstein, LIGO’s detection of gravitational waves provides science with a new tool with which to potentially answer many more basic questions.

And it might lead researchers to the next great scientific theory, Perimeter researcher Luis Lehner said during the “Ripple Effects” panel hosted by Perimeter following the LIGO announcement. [Watch a replay of the forum here.]

“When we can get more and more data, we might be able to see departures [from what is expected], and that may guide us in what replaces relativity,” he said.

As more gravitational wave detectors come online in the next few years, scientists will be able to glean increasingly rich information about the universe around us.

“That will give us a very important network that will allow us to … reduce serendipity from astronomy, at least for some sources,” Lehner said.

For many scientists, the most exciting prospect is that gravitational wave astronomy could enable researchers to probe the “dark” universe: objects and forces that don’t absorb, reflect, or emit light, yet make up 96 percent of the universe.

Perimeter Associate Faculty member Avery Broderick said this is a seismic shift in astronomy, which has been studying the light side of the universe for 10,000 years.

“I would be shocked if we don’t see the same thing when we look with gravitational eyes, and see the gravitational wave universe as totally different. This is going to be absolutely critical to understanding how the dark universe and the light universe fit together.”

Perimeter cosmologist Latham Boyle is also excited about the unknowns that gravitational waves could now reveal. As he explained during the Perimeter panel, there was a span of decades between the discovery of radio waves and their use in astronomy.

“For 40 or 50 years, nobody built radio telescopes,” Boyle said. “Finally, when they did, there was a flood of all kinds of crazy discoveries. [There was] the cosmic microwave background radiation, which is kind of a cosmic selfie, then they discovered these things called pulsars, and they discovered quasars.

“They discovered all this stuff that people would have called you crazy if you’d suggested it before. As soon as you turned it on, it was out there. It’s just a historical fact that often you see wilder stuff. That’s one of the most exciting things for me.”

– Slice of PI: General Relativity from A to Z

– “Discovering Gravitational Waves” is available for free at the PI Store