The medium is the passage

How two Perimeter researchers cracked open a door to quantum computation that has been considered closed for 10 years. 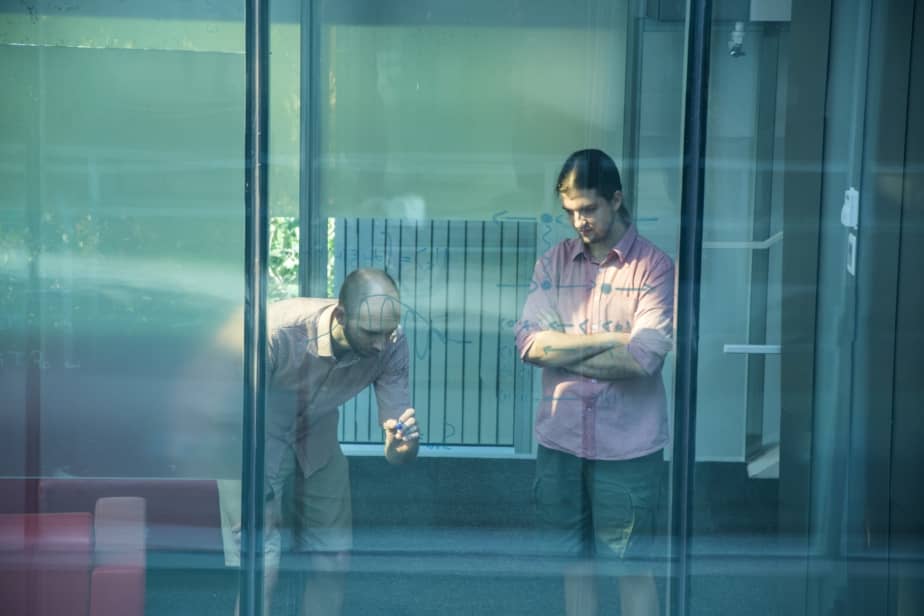 A theoretical doorway to quantum computing long considered closed has been cracked back open by two Perimeter postdoctoral researchers.

In two new papers, published in Physical Review Letters and Physical Review A, Daniel Brod and Joshua Combes, with collaborator Julio Gea-Banacloche from the University of Arkansas, revive the idea of using something called a cross-Kerr medium to create information-processing gates that would enable photons to interact – an item at the top of the wishlist for optical quantum computation.

The researchers offer a concrete example of how to construct a controlled-phase (CPHASE) gate, and hope that, by showing that the scheme is possible in principle, they will help breathe new life into a long-dormant avenue of inquiry.

The proposal to use photons for classical computing was first made, by Gerard Milburn, in 1989. Isaac Chuang and Yoshihisa Yamamoto extended the idea to quantum computing in 1995.

These proposals were based on something called a Kerr nonlinearity (in which a particular kind of medium permits photons to interact with each other, producing a phase shift) and did the analysis using light of a single frequency.

Most researchers took those two papers as a clear “no-go” sign and pursued other lines of investigation, most commonly the Knill-Laflamme-Milburn (KLM) protocol that today dominates the field of optical quantum computation.

But a smaller group kept knocking on the Kerr-medium door. For more than a decade, they made little progress. Over the years, a trend emerged: researchers would present new attempts to make the scheme work, then other researchers would take a close look and show where those attempts failed.

Now, Combes, Brod, and Gea-Banacloche have found one instance in which it does work.

THE PROBLEM WITH PHOTONS

Optical quantum computation would be much easier to create if photons were able to interact directly with each other. Instead, like shy people at a cocktail party, they move through the same space without talking to each other.

That means photon interactions need a mediator – kind of like a mutual friend passing messages between those shy folks so they can communicate without having to strike up the conversation.

Nonlinearities are the optical-quantum-computing equivalent of that beleaguered friend: the site of an information exchange. Nonlinear gates interact with the photons, and essentially do the talking for them. In the case of a controlled-phase (CPHASE) gate, that interaction results in a phase shift.

Current attempts to create CPHASE gates require intense management at each step of the way: to execute complicated control pulses and sequences, to account for things like error correction.

That makes using a Kerr medium particularly inviting; in theory, the medium would do all the work without requiring intense handling at each step.

In their papers, Brod and Combes detail a passive CPHASE gate made from a two-atom Kerr medium. These pairs of atoms are used to create sites where the photons can interact, and multiple sites are chained together to form the quantum gate.

However, if two photons enter the gate, both atoms get excited. The electrons in the excited atoms jump to a higher orbit, where they can talk to each other. Due to this atom-atom interaction in the gate, the photons are released with a slightly different phase – without the need to manage any aspect of the interaction itself.

And their proposal can withstand real-world effects.

“It’s kind of a black box – just throw your photons in there and see what comes out at the other end,” says Brod. “They are very explicitly not ignoring each other anymore.”

Why does the scheme proposed by Brod and Combes work when so many others have failed? First, they assumed a “Goldilocks” photon, which turned out to be just the right size for the computation to succeed.

Second, they allowed their photons to interact at multiple places. Each site shifts part of the photon wave packet; after a number of gates, the desired phase shift is achieved.

Third, they realized that having the two photons travel in opposite directions (counter-propagating) rather than in the same direction leads to much greater quality gate.

This final realization came from an unexpected place. Brod had previously worked on quantum computing using random quantum walks, at the Institute for Quantum Computing at the University of Waterloo.

That research team had used counter-propagating waves to deal with spectral entanglement. As Brod puzzled over the cross-Kerr challenge, he saw a connection.

“It’s in a different field and different setting, but when you abstract away the physics, it looks very similar,” Brod says. “I got the intuition that there are things these guys do that optics people have never tried. Let’s try that.”

If the previous “no-go” papers had demarcated the places cross-Kerr nonlinearities failed, Brod and Combes targeted the gap that was left, and found a model that works.

When the pair posted a preprint of their long paper to the arXiv, Gea-Banacloche took a close look – and ended up contributing a section to the paper and becoming a co-author.

Those previous papers are still correct; under the assumptions made in Shapiro’s and Gea-Banacloche’s papers, the systems do not work. But Brod and Combes expect that – should researchers instead use the “Goldilocks” regime of these recent papers – schemes previously deemed to have failed could, in fact, work.

There are a number of schemes currently being pursued to harness photons for quantum computing.

The dominant KLM scheme can require thousands of gates to reach a fidelity of 95 percent. (How good a gate is – its “fidelity” – can be interpreted as how likely the gate is to work, or it can be a measure of noise in the data.)

A different cross-Kerr proposal, published in 2013, used photons going in the same direction, and required a million sites to reach 95 percent fidelity.

For purists, the impossibility of a 100-percent-fidelity CPHASE gate has been a reason not to pursue the scheme. But for Brod and Combes, that is exactly the reason they believe CPHASE gates via cross-Kerr are worth pursuing.

General quantum computing embraces quantum error correction, which says operations don’t need to be perfect – they just have to pass a threshold of quality.

These two new papers show that cross-Kerr nonlinearities can deliver what Brod and Combes believe is a similar acceptable level of imperfection. The same “good enough” principle could apply.

“People want things to be perfect, which is a lofty goal, but it’s not necessary,” says Combes, who did the work as a postdoctoral fellow at Perimeter and the Institute for Quantum Computing, and recently started a research fellowship in Australia. “You’re never going to get a perfect CPHASE gate, but maybe we don’t actually need one.”