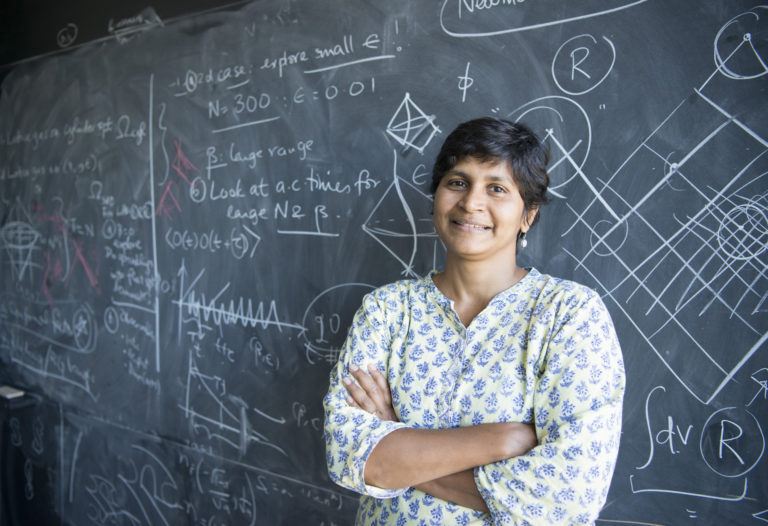 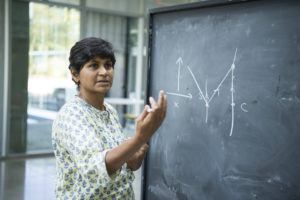 When Sumati Surya was a little girl in India, her fascination with physics and mathematics led her father to encourage her to be “the next Marie Curie.”

While such lofty aspirations seemed remote to her, she loved the idea of using reason and the scientific method, as Curie and many other pioneers had, to unravel the mysteries of nature.

Now, as a theoretical physicist, “unravelling the mysteries of nature” is basically her job description.

Surya realizes in retrospect that the unconditional support she received from her parents emboldened her to pursue a career in physics – an “uneven playing field” in which women are under-represented due to longstanding systemic barriers.

“When I was younger, I just followed my nose to physics,” says Surya, who has taken a sabbatical from Bangalore’s Raman Research Institute to work and collaborate at Perimeter Institute.

“My parents never saw gender as an issue in any sense. But over time you come to realize there are biases – even biases that people don’t realize they have – which affect whether women at large get the right opportunities to pursue science and contribute.”

While at Perimeter, Surya has been immersed in intense collaborations about her specialty: causal set quantum gravity. It is a relatively small field, exploring the causal relations between spacetime events as part of the quest to describe the foundations of gravity.

“Quantum gravity is usually done by one or two people at a given place,” she says, “but here it’s unbelievable the number of people you meet. You get a real exposure to what’s happening, what people are thinking about.”

Having earned her PhD at Syracuse University under Rafael Sorkin – one of the founders of quantum gravity, and a senior researcher at Perimeter – and held research positions at prominent centres around the world, Surya is at the forefront of the fast-emerging field.

Her eight-month sabbatical at Perimeter was made possible by an Emmy Noether Visiting Fellowship, which provided her with financial and logistical support to move to Waterloo with her husband (also a physicist and visiting researcher at Perimeter) and their two young children.

“It is hard to describe how fantastic this fellowship has been,” says Surya. “Shifting from halfway across the world is already a difficult thing for an individual, let alone a family with two young kids, but it has been the easiest I can imagine because PI has done so much.”

The pressures of raising a family are among the many factors that have contributed to the under-representation of women in physics, exacerbated by outdated cultural norms, gender roles ingrained from youth onward, and systemic discrimination – both deliberate and unintended. 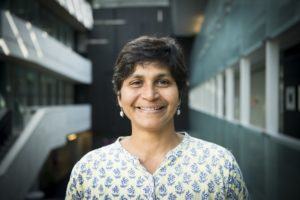 Although positive change is occurring, progress is slow. Perimeter’s Emmy Noether Initiatives, named in honour of a pioneering mathematician who persevered in the face of tremendous barriers, aim to accelerate the pace of positive change through fellowships, educational outreach, and other forms of support.

Surya considers herself lucky to have been brought up in a family that placed no limitations on her based on gender. She realizes that was unusual, particularly in India, where women are traditionally expected to run the household. Surya came to learn through experience that her family’s forward-thinking perspectives were far from universal. She faced overt discrimination when returning to India after studying and working abroad, and knows it still happens around the world.

“I think one of the biggest things people forget is that when you deny opportunities to women who are wonderfully trained and really smart, it means you’re losing out on a lot of intellectual capital,” she says. “The physics community hasn’t yet fully realized what they’re losing when women drop out of physics. You’re essentially doubling the time it takes to have any kind of scientific revolution if you’re losing these women.”

Surya still chuckles when she recalls her father predicting she’d be “the next Marie Curie.” While she’s indeed at the forefront of an emerging branch of physics, she likes to think of herself as part of the collective effort of fundamental science – an effort she views as a force for positive social change.

“The social role that scientists play is a very important activity for any modern nation,” she says. “It is helping people to question existing structures. The potential science has to question everything is a very, very essential tool. The more people who have access to that tool, the better it is for society at large.”