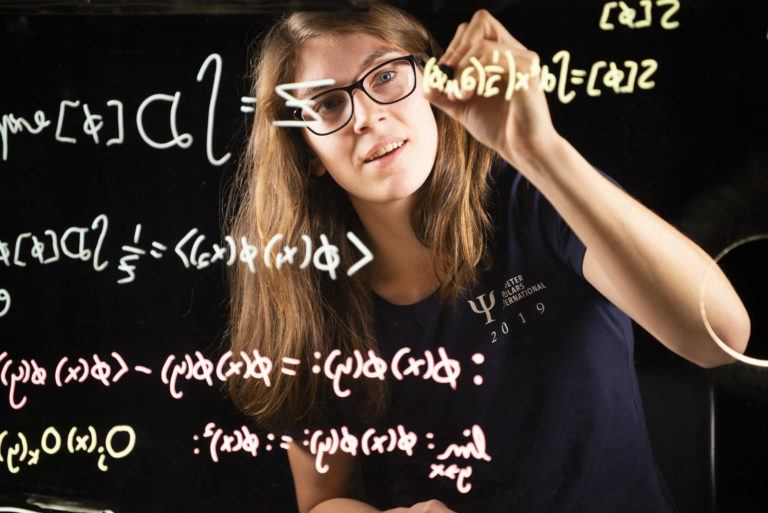 Shortly before sunset, Elise LePage unshouldered her heavy backpack and dropped it to the mossy forest floor. Having found a suitable spot to set up camp for the night, she unpacked the simple tarp she used as shelter on her journey.

She knew she was somewhere in Vermont, somewhere along a 430-kilometre path known, fittingly, as the Long Trail. She also knew the remaining daylight would afford some time to read her tattered copy of Kurt Vonnegut’s Breakfast of Champions before darkness enveloped the forest and unveiled a canopy of stars stretched between horizons.

She felt simultaneously connected to the Earth and afloat in the vastness of the universe. That feeling – the sense of a connectivity between all things great and small – had been on her mind. The hike made her feel it in her bones.

It was the summer of 2016, and LePage was barely 20 at the time. She had only recently realized, mostly by accident, that the study of physics could feed her desire to tease out nature’s unifying principles.

She can pinpoint that realization to a single moment. It was during spring break of her second year at Hamilton College in New York and LePage was reading a book loaned to her by a friend: Manjit Kumar’s Quantum: Einstein, Bohr, and the Great Debate About the Nature of Reality.

At the time, LePage was a geoscience major who had only taken an introductory physics class to meet a curriculum requirement. After reading the book, she switched majors. “The book showed me that physics goes beyond the Newtonian mechanics we learned in high school,” recalls LePage, who grew up in Massachusetts. “I’m drawn to fundamental questions.”

The allure of deep questions inspired her to apply for Perimeter Scholars International (PSI), where she is now earning a master’s degree with a focus on the interplay between pure mathematics and physics. That interplay, she believes, “will shed light on the answers” to some of the most fundamental questions in physics.

“Ideally, I would like to come up with a theory to unify general relativity and quantum mechanics,” she says, half-jokingly.

She realizes that’s a lofty goal – perhaps the loftiest, most sought-after goal of contemporary theoretical physics – but she also believes it is possible, and she wants to play her part.

“I’m not sure I’ll be the one to single-handedly unite the theories,” she clarifies, “because I consider physics to be more of a group effort than that. I’d like to at least make significant contributions in the right direction, though. I’ll hopefully find some pieces of the puzzle.”

Equipping brilliant young minds with the tools they’ll need to solve difficult puzzles – whether as lifetime physicists or in other careers – is the goal of Perimeter Scholars International. Students are encouraged to work tenaciously and collaboratively toward solutions.

LePage and her colleagues in the 10th class of PSI must work together to thrive – not just in the classroom, but as peers on a shared adventure. Some go running together. Some go rock climbing. They cook and eat together, sharing cuisines from their respective home countries. And in between classes, most can be found playing a pattern-recognition card game called Set, often with a competitive zeal bordering on obsession.

They do these things together because theoretical physics is really, really hard. It helps to lean on one another for advice, support, and a sense of unity.

The challenge of it all doesn’t deter LePage. Her ongoing search for unity – whether through complex physics research or camping under the stars – is what keeps her curious, keeps her motivated, keeps her moving.

The path is not always well illuminated, and it is rarely straight. But LePage knows that progress on even the most daunting challenges is made one step at a time.