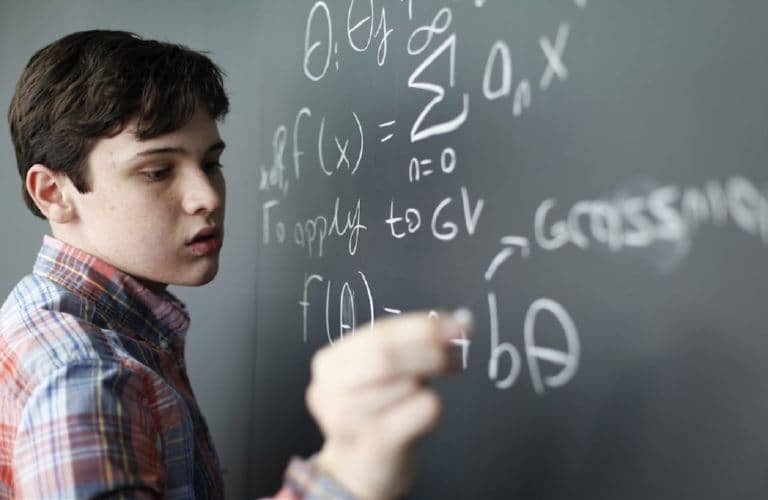 Jacob Barnett, sprinkled in chalk dust, scrawls complex equations on a floor-to-ceiling blackboard at the Perimeter Institute for Theoretical Physics in Ontario, Canada.

No matter how many vexing physics topics he tackles – general relativity, strong gravity, field theory – one class of problems remains just beyond his reach: the ones at the top of the blackboard. 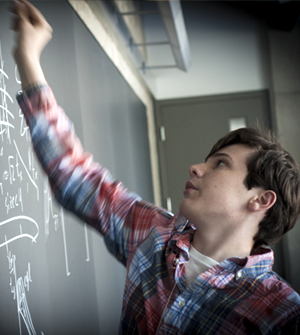 At 15 years old, Jacob just isn’t as tall as his scientific peers at Perimeter. But like his older colleagues, Jacob’s desire and ability to decode the deepest mysteries of the universe are boundless.

Still a year shy of eligibility for a driver’s license, Jacob has just been admitted to Perimeter Scholars International (PSI), an innovative theoretical physics master’s program, offered jointly by Perimeter and the University of Waterloo, which draws exceptional young physicists from around the world to Perimeter.

Since he had not yet completed his bachelor’s degree, Jacob is taking PSI as part of a UW undergraduate “Independent Studies” program, which will take two years to complete: the first year as part of PSI and the second year conducting research supervised by a professor. After that, he will be ready to pursue doctoral studies.

Jacob and his parents spent months touring the most renowned universities in North America and abroad, looking for the perfect place for him to pursue his training and, ultimately, PhD. He had received offers from top universities, and his heart was set on Cambridge until he set foot inside Perimeter Institute, an independent centre dedicated to world-leading research, training, and outreach.

“This was very obviously the place where theoretical physics is conducted,” says Jacob. “Everyone here is very into what they’re doing and very successful at it. And there are equations on the windows, blackboards, everywhere.”

By age 12, Jacob had converted his bedroom into a physics lab, complete with glass-top desks on which he is perpetually scrawling equations, often lying on the floor to write on a bare patch on the underside of the glass.

He received his first research grant that same year, which led to the publication of his first academic paper, “Origin of maximal symmetry breaking in even PT-symmetric lattices,” in a leading physics journal.

It’s advanced, graduate-level physics. To Jacob, it’s child’s play. He does physics because he absolutely loves it, and always has.

“I’ve been looking at the world very interestingly for as long as I can remember,” says Jacob.

Jacob’s family recalls that, as a baby, he’d spend countless silent hours watching the interplay of light and shadows in their Indiana home, quickly learning to tell the time – precise to the minute – simply by knowing the sun’s position in the sky.

While still in diapers, he’d empty cereal boxes of their contents – not merely for the bliss of making a mess, but to calculate with decimal-point accuracy the volume of each box. While buckled up in his car seat as a toddler, he’d rhyme off the address of every house they drove past, then mentally add up those numbers and blurt out their sum.

Before he could talk, he strung elaborate matrices of yarn around his family’s kitchen – geometric patterns that his parents later realized were equations in a kind of parallel mathematics that he had invented.

As if entangled in one of those complex spiderwebs of yarn, the story of Jacob’s genius is intertwined with the story of his autism.

At first a bubbly and affectionate toddler, Jacob suddenly retreated into silence, spending years uncommunicative and seemingly detached from reality. Special education teachers urged his parents, Kristine and Michael Barnett, to lower their expectations for Jacob, warning that he might never speak or learn to tie his shoelaces.

Unwilling to accept the grim prognosis, Kristine pulled her son from preschool and committed to a home-schooling approach that focused on nurturing Jacob’s interests, like weather patterns and starry nights.

His prodigious spark became fully evident when, before he was even old enough for kindergarten, Jacob piped up during a public astronomy lecture and, to the amazement of everyone in attendance, correctly pointed out that the moons of Mars are oval-shaped because their mass is too small for gravity to pull them into spheres.

The more Jacob studied physics, the more he emerged from the inner exile of autism.

He began auditing physics and mathematics courses at an Indiana university at age 8, and was fully enrolled and taking graduate-level courses by 12.

Having completed most of the advanced physics courses available there, Jacob set his gaze to obtaining a full-fledged PhD at a top-tier institution.

He accompanied his mother on an international book tour – she recently published The Spark: A Mother’s Story of Nurturing Genius – and visited universities and research institutions along the way.

The final stop of the book tour was this past June in Toronto, giving Jacob a chance to attend a colloquium about quantum gravity at the nearby Perimeter Institute.

Afterward, he said to his mother: “I found the place.”

In August 2013, Jacob and 30 other students started the PSI program, studying under world-leading researchers from Perimeter and around the world.

To ensure Jacob was up for the challenge of the PSI program, Perimeter researchers assigned him several graduate-level course modules as homework, which he quickly completed.

Perimeter Academic Program Director John Berlinsky says Jacob’s track record and proven grasp of advanced topics in theoretical physics make him an ideal candidate for PSI, which has graduated 125 exceptional young scientists from 37 countries over the past four years.

“The PSI program is custom-designed to allow beginning graduate students to explore the full spectrum of theoretical physics,” says Berlinsky. “Jacob is clearly ready for this experience.”

Jacob hasn’t yet decided what his research focus will be – whether quantum gravity, string theory, cosmology, particle physics – and that, he says, is part of the fun.

“There are so many areas I’m interested in. Physics is the foundation for understanding nature and the universe. I want to try it all, figure out my speciality, then go for it.”

The story of Jacob’s remarkable intellect is told in the acclaimed 2012 bestseller, The Spark: A Mother’s Story of Nurturing Genius, by his mother Kristine Barnett. Jacob is a child prodigy with a photographic memory and stunning grasp of complex math and physics. He taught himself calculus in two weeks. At nine, he started working on an original theory in astrophysics, and at age 12, he became a paid researcher in quantum physics. In August 2013, at age 15, he joined 30 other brilliant emerging scientists from around the world as a student in Perimeter Scholars International (PSI).

Perimeter Scholars International is a one-year master’s-level course in theoretical physics designed to bring highly qualified, highly motivated graduate students to the cutting edge of theoretical physics in an intense, interactive learning environment. Taught by some of the world’s top physicists, students at PSI are fully integrated into the unique international culture and dynamic atmosphere of a leading research institute, the Perimeter Institute for Theoretical Physics, while earning master’s degrees from the University of Waterloo.

Perimeter Institute for Theoretical Physics is an independent, non-profit, scientific research organization working to advance our understanding of physical laws and develop new ideas about the very essence of space, time, matter, and information. Located in Waterloo, Ontario, Canada, Perimeter also provides a wide array of research training and educational outreach activities to nurture scientific talent and share the importance of discovery and innovation among students, teachers, and the general public. In partnership with the Governments of Ontario and Canada, Perimeter is a successful example of public-private collaboration in scientific research, training, and outreach. http://www.perimeterinstitute.ca/

In addition to exploring Perimeter’s online resources, visit the Institute this fall to take advantage of two concurrent events which include engagement opportunities for the general public: