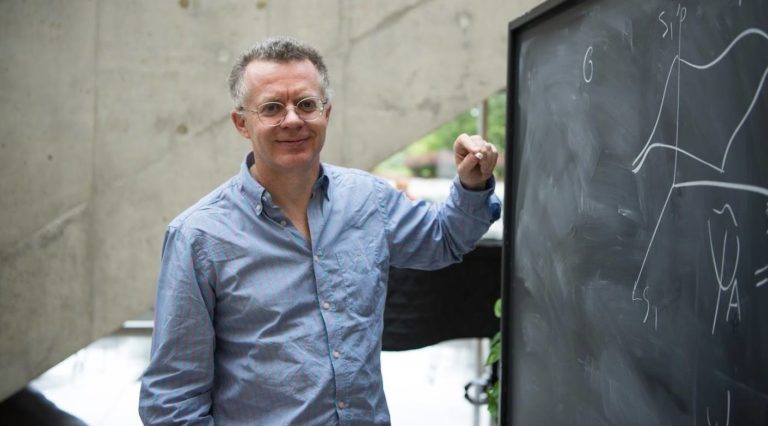 Lucien Hardy wants you to know that general relativity is weird, too.

Of the two great theories of the 20th century – quantum theory and general relativity – quantum theory is famous for its weirdness. It’s governed by probabilities: it doesn’t tell you what’s going to happen but gives you a range of outcomes and some measure of the likelihood of each. It has features like entanglement, where two parts of a quantum system are so closely correlated that they seem to affect each other instantaneously, even across vast distances; and superposition, where a quantum system is in two states at the same time.

“In general relativity, you ask questions about space and time,” Hardy explains. “Spacetime tells you which events come first and which events come later, and which events have before-and-after connections with each other.” Because spacetime isn’t fixed, those relationships aren’t fixed either. “Say you have a mass here and it moves this way – it may affect the order of events differently than if it moved that way. So causal structure is dynamical.”

There’s more to say about general relativity, but in Hardy’s view, “the take-home is, it’s not quantum theory’s conceptually pedestrian cousin. It’s quite radical, really.”

So, if general relativity and quantum theory are both conservative in some ways and radical in others, what happens if you combine them?

For decades, physicists have sought a single theory that combines quantum theory and general relativity as if they were two sides of one coin. That unknown combined theory is usually called quantum gravity.

“It seems to me that a theory of quantum gravity ought to take the radical features of both theories,” says Hardy. “Once the probabilistic cat is out of the bag, it’s unlikely that you can get it back in. And, likewise, once dynamical causal structure is out there – I’m not sure dynamical causal structure is easily described as a cat, but it does seem unlikely to go away.”

A hypothetical theory of quantum gravity could have both the probabilistic nature of quantum theory and the dynamical causal structure of general relativity. And Hardy says it could be even more radical than that.

It’s a confounding concept: that one event can be simultaneously both before and after another. Time and space start to lose any sense of identity, to a much greater extent than they did even in general relativity.

“Suddenly you’re in this in this wildland,” says Hardy. “What’s before and what’s after is no longer definite. In such a world, you wouldn’t be able to say ‘let’s describe the world at a given time and evolve it forward in time,’ because that would presuppose that you had definite causal structure; that you had a stage with a clock going. And that way of thinking simply isn’t possible.”

If quantum gravity really is such a wildland, how can physicists possibly find their way through it? Or as Hardy puts it: “How can you tame this wildness? That’s what I’ve been thinking about recently.”

What would Einstein do?

To tame the wilderness of indefinite casual structure, Hardy is trying to one small place in which the worst of the weirdness can be ignored.  He’s taking his guidance from history: from the work Einstein did between 1905 and 1915, between special and general relativity.

In 1905, Einstein published a paper called “On the electrodynamics of moving bodies,” which introduced the theory that came to be called special relativity. It was a breakthrough, but Einstein quickly realized his new work wasn’t compatible with Newtonian theories of gravity. Like quantum theory and general relativity today, both special relativity and Newtonian gravity made accurate predictions and stood up to experimental tests, but they relied on fundamentally different assumptions. They could not both be used at the same time.

Einstein knew he needed a deeper theory – one that looked like gravity tilted in one direction, and like the electrodynamics of moving bodies when tilted another. The breakthrough came in 1907, when Einstein had what he called “the happiest thought of his life.”

“Imagine,” Einstein wrote, “a workman standing on the roof of a house and losing his footing. As he plummeted in free fall, everything within his grasp (a toolbox, for example) would plunge with him. Therefore, from his local perspective, gravity wouldn’t seem to exist.” Falling, he said, was equivalent to being outside of gravity. He pushed this idea further and further, until it was a formal statement known as “the equivalence principle.”

The equivalence principle was the starting point for a new theory of gravity: general relativity.

Today’s problem, combining quantum theory with general relativity, has the same structure as the problem Einstein faced. “So,” says Hardy, “the idea is to see if we can learn from what Einstein did, and transplant his techniques to the modern era.”

Einstein’s equivalence principle can be approached with a thought experiment. Imagine an astronaut waking up in a windowless box. It might be an elevator on Earth or it might be a capsule floating in deep space. There’s no window, so the astronaut can’t be sure. She feels weightless. If she throws an apple, it seems to move in a straight line, governed only by its own inertia. When she lets go of the pencil in her hand, it seems to float.

Is the astronaut in space, far from the reach of Earth’s gravity? Or is she in a falling elevator, watching her pencil float the way the workman’s toolbox floated as it fell alongside him? There is no way to tell. From the point of view of physics, the two situations are equivalent.

“A different way of stating that is that you can always find a frame of reference such that, locally, you only have inertial motion and you can ignore gravity,” says Hardy. “It doesn’t work over too big a distance, but inside the box, which isn’t too big, everything looks as if it’s just moving in a straight line, just in an inertial fashion. So the equivalence principle is a way of taming gravity – reducing it to inertial motion.”

Could something similar be found to tame the wildlands of indefinite causal structure? Hardy proposes we try.

“I wrote that down before I knew what it meant,” says Hardy, ruefully. In the three years since, Hardy has been working to define what, exactly, a quantum coordinate system is. Last year he published a paper outlining one workable possibility. It may not be the only or the best version of a quantum coordinate system, but it’s enough to explore the idea further, and to show how such a coordinate system can be used to obtain a definite causal structure in the vicinity of a point – to tame the wildlands just a little.

It is, in short, a clear space that marks the beginning of a path.

There may be many roads by which to approach quantum gravity. It is, after all, a wilderness in which physicists have been lost for 80 years, and two whole fields of study – string theory and loop quantum gravity – have each spent decades charting their possible courses. Nor are they the only possibilities: from asymptotic safety to shape dynamics to supergravity, there are a dozen different ideas.

But the path Hardy is charting is new – and old. “Einstein used an insight – the equivalence principle – plus a large dose of genius to come up with general relativity,” he says. “Can we do something similar? Can we adopt the same approach?”

Only time – indefinite as it may be – will tell.