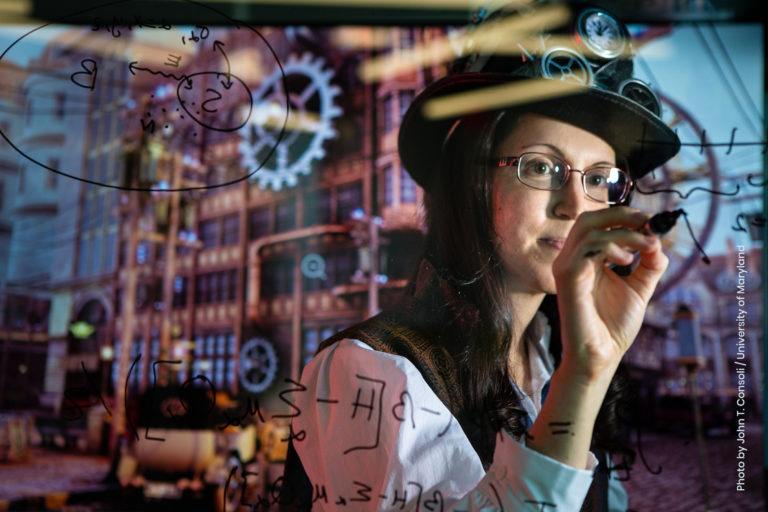 Nicole Yunger Halpern has an affliction shared by many bright young people who pass through Perimeter. The problem? “I am,” she says, “terminally interested in everything.”

There is no cure for broad curiosity, but Yunger Halpern has adapted to her condition by choosing a field where she gets to do a little bit of many things: “Quantum physics, information theory, and thermodynamics, with sides of atomic, molecular, and optical physics; condensed matter; high-energy physics; and chemistry.”

She calls it quantum steampunk. Or, as the title of her forthcoming book has it, Quantum Steampunk: The Physics of Yesterday’s Tomorrow. The field’s aim: to reinvent thermodynamics for the quantum age.

“In the 1800s, steam engines were transforming the world,” Yunger Halpern says. “Thermodynamics started with a practical exploration of how they worked, and how they could be made to be more efficient – but it came to cover fundamental questions, like ‘Why does time flow in only one direction?’”

Now, 21st-century researchers are doing things like extracting work from single-electron boxes and examining the molecular motors of living cells. The 19th-century toolkit struggles with things that are essential in this context – quantum entanglement, for example. “So, what we need,” says Yunger Halpern, “is a toolkit for fusing the old with the new.”

Her quantum steampunk laboratory is part of an effort to develop one.

Yunger Halpern is a Perimeter alum – part of the Perimeter Scholars International (PSI) class of 2013. After getting her master’s degree at PSI, she completed a PhD at Caltech, studying with John Preskill. She went on to do a postdoctoral fellowship at Harvard. Now, she’s just landed in the Washington, D.C. area, where she is a staff physicist at the National Institute of Standards and Technology and an adjunct assistant professor at the University of Maryland.

She also may be the only physicist with a time machine, top hat, and flock of cosplayers on the first page of her doctoral thesis. It’s the kind of opening that calls out for an origin story.

“When I was a student, I didn’t have a lot of time for extra reading,” she says. But, in her next breath, she notes some of the books she snuck in anyway. “Jay Ruzesky wrote this book about a clock,” she recounts. “I particularly remember one scene about a factory of automata. Something just clicked.”

What she had discovered was steampunk: a retro-futurism that takes the tropes of Victorian-era science fiction – think Jules Verne or H.G. Wells – and uses them to ask new questions.

Yunger Halpern began to let the steampunk spirit – equal parts joyful and critical, thriving on unexpected juxtapositions, liking nothing better than hinged goggles where new lenses can be flipped down over the eye – infuse her work.

Her first unexpected juxtaposition was between information and energy. In the last year of her undergraduate degree, she went to a lecture where the professor talked about that relationship. “I was fascinated by the thought experiments he proposed – fascinated by the whole idea, really,” she says. “I felt this jolt of excitement.”

A hinged set of goggles dropped into place, and she began to consider thermodynamics – the study of how energy moves – through the lens of quantum information theory. At PSI, she wrote her culminating research essay in quantum information, working with Perimeter Faculty member Robert Spekkens and then–postdoctoral researcher Markus P. Mueller.

She was part of a movement. In the 2000s, quantum information theory approaches invaded the rest of physics.

“By then, quantum information theory had been developed enough that it could be applied to, say, black holes,” Yunger Halpern says. The robust new tools of quantum information were used to take apart and reassemble difficult problems in a range of other subfields. Whole new research lines were opening.

The connection may not be obvious, but it’s definitely there. Take entropy, which has been studied both as a measure of heat and a measure of ignorance.

“Suppose we are trying to use entanglement to share information in a certain channel,” Yunger Halpern wrote in Scientific American. “We might ask, ‘Is there a theoretical limit to how efficiently we can perform this task?’ The answer will likely depend on entropy.”

If that’s quantum thermodynamics, what’s quantum steampunk? “Partly, it’s just what I call it,” says Yunger Halpern. But more, it’s a flavour, an outlook, a genre – not just a Jules Verne gloss on things, but deliberate retracing of 19th-century paths by 21st-century trekkers.

For instance, since thermodynamics arose from the study of steam engines, quantum steampunkers are working on quantum engines. Yunger Halpern has published a theoretical description of one such engine, called the many-body-localization mobile.

Though she’s not actually tinkering with quantum engines, not all of Yunger Halpern’s work is in chalk and code. “One thing that I love to do is find problems where I have half the necessary tools, and can find researchers in other fields who have the other half. It’s wonderful to go along for the ride with generous people who teach me their tools, so that we can solve the problem together.”

She gives an example of work she did in partnership with a chemist at UC Berkeley, “to get bounds on the probability that the molecular switch would switch.” Molecular switches are complex molecules that absorb photons and then switch configurations. A better understanding of molecular switches could be useful any place such switches are found – which is everywhere from the human eye to the latest solar fuel storage devices.

Yunger Halpern relishes the chance to work with experimentalists – not just for the fun of it, but for the sake of her field. “I would really like for quantum thermodynamics to have more experiments,” she says. “We’re developing a body of theory, but we need the experiments too.” As the age of steam proved, science progresses when theory and experiment pull themselves along hand over hand.

If that’s so, then expect to see quantum thermodynamics picking up steam. Technology is shrinking and becoming more quantum. To pick particularly steampunk examples: both single-ion engines and three-atom refrigerators have been built in the last five years.

For now, one foot in the steam age, and one eye on the future, Yunger Halpern is going full steam ahead.