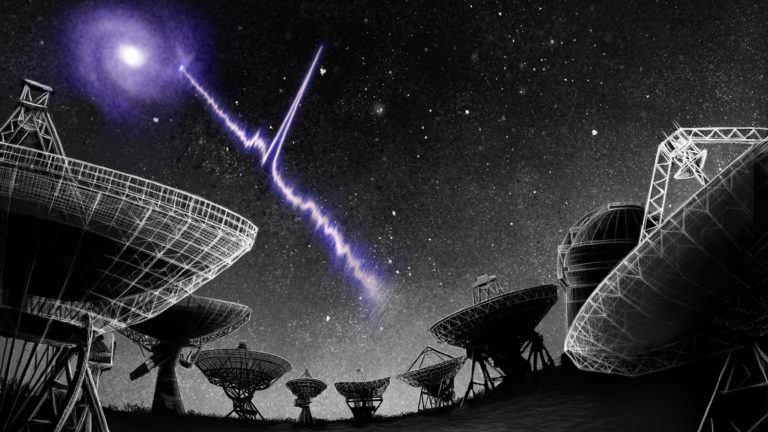 Scientists continue to unravel the cosmic mystery of fast radio bursts (FRBs), having pinpointed the location of a so-called “repeater” – a burst that happens again and again on an irregular schedule.

Researchers have “localized” the FRB, first detected by Canada’s CHIME telescope in 2018, to a spiral galaxy roughly half a billion light years from Earth, to a region of the galaxy where star formation is known to be prominent.

An interconnected array of eight telescopes in the European VLBI Network (EVN) observed a repeating FRB in a spiral galaxy similar to our own. This FRB is the closest one to Earth ever localized, and was found in a radically different environment than previous studies. The discovery, once again, changes researchers’ assumptions on the origins of these mysterious extragalactic events.

On June 19, 2019, eight telescopes from the EVN simultaneously observed a radio source known as FRB 180916.J0158+65. This source was originally discovered in 2018 by the CHIME telescope, which enabled the EVN team to conduct a very-high-resolution observation in the direction of FRB 180916.J0158+65. Their results were published this week in Nature.

Kendrick Smith, who pioneered much of the software that enabled the CHIME telescope to detect FRBs at an unprecedented rate, says the localization of an FRB is an important step toward solving the mystery of what causes the phenomena.

“CHIME is a new telescope created by a small team of people on a modest budget, but in the last year has become the most powerful telescope in the world for finding new FRBs,” said Smith, who holds the Daniel Family James Peebles Chair in Theoretical Physics at Perimeter. “The next frontier will be localizing FRBs to their host galaxies, to understand the physics responsible for the FRB phenomenon. By joining forces with the EVN telescope, we were able to localize a repeating FRB detected by CHIME in 2018, and hope to do the same for more repeating FRBs in the near future. In the next few years, we also plan to build small ‘outrigger’ telescopes for CHIME which will allow us to localize FRBs at a high rate.”

Zeroing in on an FRB 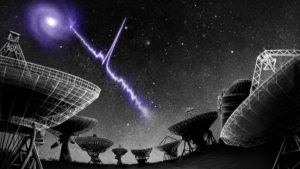 During five hours of observations, the EVN researchers detected four bursts, each lasting for less than two-thousandths of a second. The resolution, reached through the combination of the telescopes located across the globe, using a technique known as Very Long Baseline Interferometry (VLBI), meant that the bursts could be precisely localized to a region of approximately only seven light years across – a relatively tiny area, given the vast distance from Earth. This localization is comparable to an individual on Earth being able to distinguish a person on the moon.

“The multiple flashes that we witnessed in the first repeating FRB arose from very particular and extreme conditions inside a very tiny (dwarf) galaxy,” says Benito Marcote, from the Joint Institute for VLBI ERIC and lead author of the new study.

Because the FRB is the closest to Earth ever localized, it will allow astronomers to study these events in unparalleled detail.

“We hope that continued studies will unveil the conditions that result in the production of these mysterious flashes,” said Jason Hessels, corresponding author on the study, from the Netherlands Institute for Radio Astronomy (ASTRON) and the University of Amsterdam. “Our aim is to precisely localize more FRBs and, ultimately, understand their origin.”

The discovery fits perfectly with ideas proposed by members of the CHIME/FRB team, who first detected the FRB in 2018. Perimeter researchers Kendrick Smith and Dustin Lang explain that discovery in the video below:

Since it began operation in the summer of 2018, CHIME has detected dozens of FRBs, drastically accelerating the rate of detections. CHIME’s 1,000 antennas give the telescope a large field of view, allowing it to scan large swaths of the night sky in search of the fleeting astrophysical phenomena.

The CHIME/FRB team worked closely with their colleagues in the EVN group to determine exactly where to point the eight telescopes – in locations spanning from the UK to China – to zero-in on the repeater.

CHIME/FRB is a collaboration of over 50 scientists led by the University of British Columbia, McGill University, Perimeter Institute, the University of Toronto, and the National Research Council of Canada (NRC). The $16-million investment for CHIME was provided by the Canada Foundation for Innovation and the governments of British Columbia, Ontario, and Quebec, with additional funding from the Dunlap Institute for Astronomy and Astrophysics, the Natural Sciences and Engineering Research Council, and the Canadian Institute for Advanced Research. The telescope is located in the mountains of British Columbia’s Okanagan Valley at the NRC’s Dominion Radio Astrophysical Observatory near Penticton. CHIME is an official Square Kilometre Array (SKA) pathfinder facility.