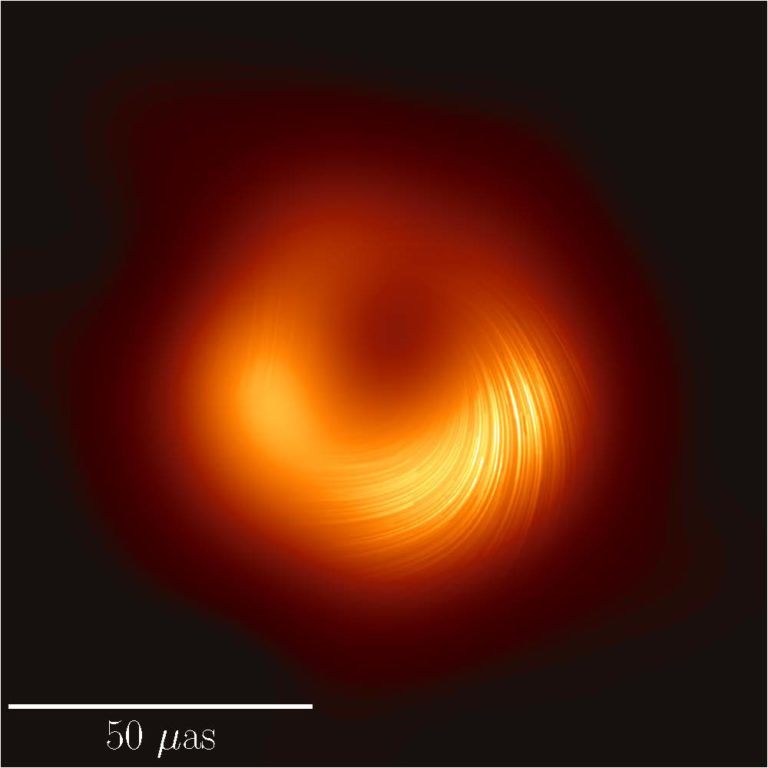 Over the spring, public health guidelines have limited or prevented in-person gathering at Perimeter. However, conferences, collaborations, and significant research continues apace, thanks to online tools. Check out the latest work, including a magnetic black hole, a catalogue of fast radio bursts, and quantum mischief.

1. The torch is passed

Over two decades, Mike Lazaridis has devoted thousands of hours of his energy and wisdom as Perimeter’s founder and Board Chair. Now, he has passed the torch to new Board Chair Mike Serbinis, a global technology leader and entrepreneur. Read more about their paths to Perimeter, the connection between them, and Serbinis’s vision for the future.

Researchers of the Event Horizon Telescope (EHT) collaboration are master portrait photographers: who can forget the world’s first stunning image of a black hole, released in 2019? This spring, the EHT collaboration unveiled a fresh portrait, shown in an entirely different light. It’s a spectacular image that shows a crisp swirl of light around the event horizon, strongly affected by the presence of magnetic fields. Find out how the image was captured, what it means, and what’s next for the EHT researchers, in this piece by Stephanie Keating – and read more via The New York Times, The Globe and Mail, CTV, Global News, and SyFy Wire.

3. Lucien Hardy and the wildness of indefinite causal structure

“In my case, everything started with Lucien Hardy’s paper,” said Časlav Brukner, a physicist at the University of Vienna. Based on groundbreaking work by Perimeter Faculty member Lucien Hardy, a growing community of physicists is figuring out how to abandon causality altogether. Learn more in “Quantum Mischief Rewrites the Laws of Cause and Effect” by Cody Muir for Quanta Magazine, and in “Quantum Gravity: The Weirdest of Both Worlds” by Erin Bow. Perimeter postdoctoral researcher Flaminia Giacomini and her colleagues are examining related questions; read more about their work here.

4. A new catalogue of FRBs

During its first year of operation, the CHIME telescope in BC detected 535 new fast radio bursts – bright flashes of light that blaze and then vanish without a trace. Now, CHIME researchers, including a team from Perimeter, have released a catalogue of the new signals. The results were presented at the American Astronomical Society Meeting in early June. Read more in this story by Jennifer Chu for MIT News, and follow the trajectory of the fascinating hunt for FRBs: the pace of discovery, the origins of FRBs, the detection of eight “repeaters,” and profiles of Kendrick Smith and Dustin Lang, two of the people who help make this research possible.

5. Deep dive Inside the Perimeter

Learn more about nature’s most profound mysteries – and the answers we’re finding – in these recent features.

Calculating scattering amplitudes for gravitons is both crucial and difficult. In “Milestone on the road to quantum gravity,” Benjamin Knorr investigates how matter scatters.

By taking a lot of measurements, fast, researchers can “mass produce galactic data,” creating a powerful new tool for understanding the expansion of spacetime. Find out how the Dark Energy Spectroscopic Instrument aims to unravel the mystery of dark energy in “DESI launches five-year quest to understand the universe.”

The interests of fundamental researchers and tech companies, perhaps surprisingly, are not so far apart. “When physicists consult” explores these intersections of theory and application.

7. Philosophy and physics for curious minds

Bestselling author Carlo Rovelli, a Distinguished Visiting Research Chair at Perimeter, has published a new book called Helgoland that attempts to demystify quantum mechanics for a general audience. In a review for The Guardian, Ian Thomson says, “Rovelli’s gift is to bring difficult ideas down a level.” Rovelli discusses the book and its ideas with Katie Mack, a Perimeter Visiting Fellow, in this video hosted by Harvard Science Book Talks and Research Lectures.

Several Perimeter researchers – and one writer – have been recently recognized for their excellence through grants, awards, and fellowships.

Perimeter’s spring season of public lectures has drawn to a close. The fascinating lectures are available online in their entirety, with a lineup that includes:

Want to stay in the know about the lectures and other upcoming Perimeter events? Subscribe here.

Though she’d been active in education and professional development for 25 years, Karen Jo Matsler first encountered quantum physics at Perimeter’s EinsteinPlus teacher workshop. That lead to further learning for her, and a realization that other science teachers also weren’t familiar with quantum principles. Now, Matsler is launching a national U.S. training program for high school teachers.

Test your knowledge of one of the most celebrated physicists of all time with this quiz, created to commemorate the 100th anniversary of Albert Einstein winning the Nobel Prize. Share your score on social media and battle your friends for bragging rights. Then, check out this gem from the archive: Einstein is often portrayed as the lone genius, but his collaborators were key to his success.