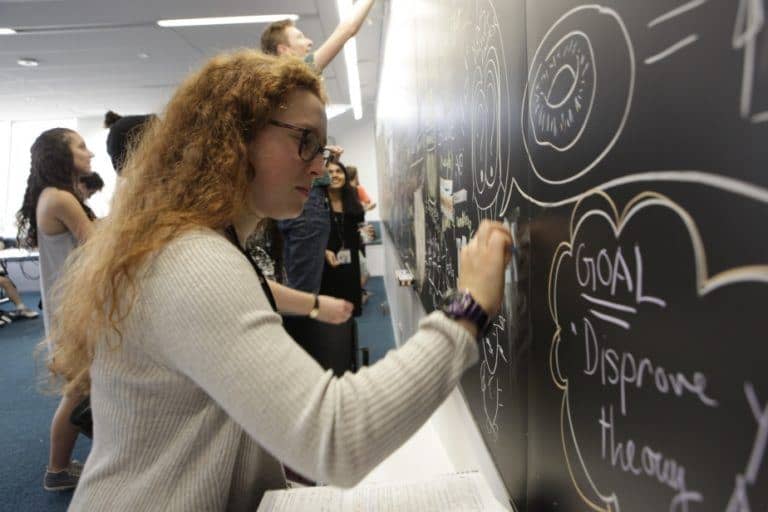 It was a lesson few, if any, of the 40 studious high-schoolers attending the International Summer School for Young Physicists (ISSYP) could have anticipated.

Not one, but two, of the theoretical physicists they met at Perimeter Institute had dropped out of high school, then picked up their studies later on.

“We should have planned that better!” laughed Perimeter Outreach Scientist Kelly Foyle when the second physicist fessed up. “You should really finish school, everyone!”

It was a lighthearted moment that carried a deeper message: the path to becoming a physicist isn’t always straight, and you don’t need to know at the start where you want to finish.

Much more important is that you are curious and willing to work hard – particularly with other people – said cosmologist Matthew Johnson, an associate professor of physics at York University and PI Associate Faculty member.

“No scientist works in isolation. It’s a community,” he said. “The best part of my job is the people. I have a lot of fun, and I think that’s extremely rare.”

The students each had their reasons to attend the summer school in July: for some, it was a deep curiosity about nature of math, for others it was a test of their devotion to the subject.

What they found was their community. They collaborated on science projects, listened to leading researchers, visited experimental sites, and goofed off at bowling.

And they got down to work, tackling a range of topics from Hawking radiation to the twin paradox.

“It’s pretty challenging, but that’s what makes it exciting,” said 15-year-old Answesha Sahu from Tanzania. She applied to the school after meeting Perimeter Director Neil Turok in Africa, and is going home even more committed to her dream of becoming a cosmologist. “It makes me want to go deeper, and understand everything better.”

During his own keynote address, Turok encouraged the students to keep questioning the world, each other, and themselves, and to not feel discouraged by the many challenges in the world.

“We should feel optimism. The world faces big, big problems… but when you look at theoretical physics, it tells you what you need,” he told the class.

“All the other problems can be solved. Of course they can. Theoretical physics is an example of what can be done when we work together and do what we’re capable of.”

Many of the students said they feel a pull between pursuing physics and studying other subjects they find equally compelling.

That was a particular issue for 17-year-old Maya Burhanpurkar, from Oro-Medonte in Ontario, who has already developed a strong reputation as a scientist-to-watch.

At 12, she prototyped an “intelligent antibiotic.” At 13, she discovered promising novel cardio-protective properties of two experimental Alzheimer’s drugs. At 14, she discovered the physical nature of a new property in Newtonian physics, becoming the first person to measure the time-integral of distance. She has worked on a near-Earth asteroid-tracking project, and is taking this coming academic year off to work on a robotics project at the University of Toronto before starting at Harvard in 2017.

“My research interests are extremely diverse,” she said. “I just love everything. I suspect that’s going to become a problem when I have to pick my major in two years.”

Like many of her ISSYP classmates, Burhanpurkar had hoped the course would help narrow her options. Instead, it revealed just how many paths she could take.

“I think it’s left me more indecisive than I was when I came in,” she admitted. “In applied research you get instant gratification, and I appreciate that – I love to code and that kind of thing – but fundamental, basic research, that’s the research that leads to those colossal steps forward.”

“I am still figuring out what I want to do in university, but physics is definitely an option,” she said. “Biology is another one, because that also explores the fundamentals of life.”

But when it comes to ISSYP, finding answers isn’t always the goal. In such a collaborative field, community is just as important. “I have met so many interesting people from so many different countries, and it has been an amazing experience,” she said.

And for Matteo Rosales, who goes home to start Grade 11 in France, the science and the summer school revived his childhood love of discovery.

“When I was little, I really liked magic, because I liked the idea of finding something different from this grey and monotonous world. I wanted answers to things that are not really tangible,” he said.

“In a way, physics has the answers. Physics is not magic but it is another way to see the world.”

RBC was the presenting partner of ISSYP 2016.

The class of 2015 provides a glimpse into the ISSYP experience.