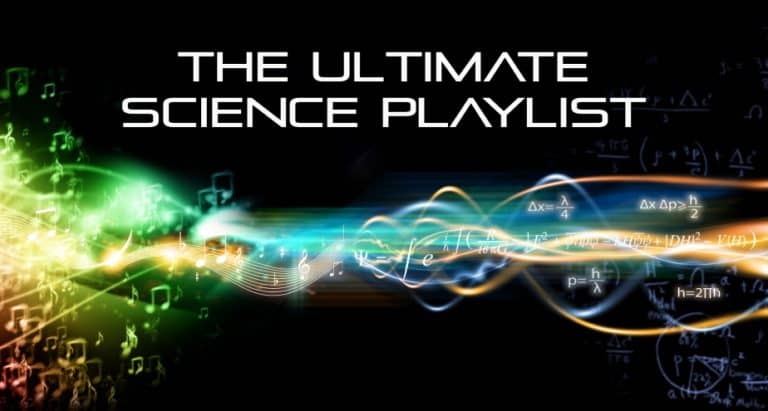 Who says you have to stop learning science over the summer? All you need is the right soundtrack to your next road trip, backyard barbeque, or day at the beach. Kick back, listen to these tunes, and you’ll finish the summer even brighter than you started!

Did we miss your favourite science song? Tweet us @Perimeter with the hashtag #SciencePlaylist.

Singer-songwriter Jonathan Coulton (JoCo, to fans) is arguably the patron saint of geek-pop, having penned the uber-catchy credits songs of the Portal games, as well as this loving tribute to a particular set of complex numbers that has a highly convoluted fractal boundary when plotted.

Ever struggled to remember all the elements in the periodic table? Perhaps you weren’t setting them to the right tune. Musical comedian Tom Lehrer’s rundown of the elements (well, those known when he wrote the song in 1959) is legendary. Interestingly, Lehrer’s background wasn’t in chemistry; he studied mathematics at Harvard, though never quite completed his PhD.

“History of Everything” – Barenaked Ladies (The Big Bang Theory theme)

You probably know this one as the theme song of The Big Bang Theory. But here’s something you might not know. The tune began as an improvised ditty Barenaked Ladies’ singer Ed Robertson performed one night in Los Angeles after reading Simon Singh’s book Big Bang: The Most Important Scientific Discovery of All Time and Why You Need to Know About It. Lo and behold, in the audience that night were Chuck Lorre and Bill Prady, creators of The Big Bang Theory. The rest is history (of everything).

Bio-Rad, a large manufacturer and supplier of life science products, has a knack for explaining complex biology in the catchiest possible way: loving musical parody. This spoof of “YMCA” (explaining a DNA-building enzyme) is one of a series of kitschy viral marketing videos. This one about thermal cyclers is hilarious too. These songs are promotional, yes, but also wonderfully catchy and science-y, so we like ’em.

“Stuck To You” – Josh Ritter

Among the beautiful lyrics in this one: “It is not love that makes the stars shine, but the spontaneous combustion of super-heated and super-condensed gases in the process known as fusion that creates new elements.”

Tim Blais, the one-man choir behind A Capella Science, is a master at conveying complex science in fun musical parodies. “Bohemian Gravity” is his most famous, but be sure to also check out our collaboration with him about gravitational waves, “LIGO: Feel That Space.”

CERN physicist Piotr Traczyk (a.k.a. Traq) “sonified” data from the experiment that uncovered the Higgs boson, turning the discovery into a high-energy metal riff.

There’s a reason Blackalicious frontman Timothy Parker goes by the stage name Gift of Gab. Consider this the contemporary version of Tom Lehrer’s “The Elements.”

“Why Does the Sun Shine?” – They Might Be Giants

Choosing just one song for this playlist by They Might Be Giants is a tricky task, since They Definitely Are Nerdy. But this one celebrates physics, chemistry, and astronomy while also being absurdly catchy, so it made the list. Honourable mention goes to their entire album for kids, Here Comes Science.

We here at Perimeter Institute (PI) have a soft spot for all things pi, and Kate Bush’s haunting song about a number-obsessed man includes several-dozen digits of every circle’s favourite irrational number.

“NaCl” is a romantic tale of the courtship of a chlorine atom and a sodium atom, who marry and become sodium chloride. “Think of the love you eat,” sings Kate McGarrigle, “when you salt your meat.”

A nine-minute epic composition, “Natural Science” is a three-movement prog-rock epic that takes a philosophical look at cosmology, ecology, the integrity of science, and human progress. It also features some killer guitar solos.

An interstellar space crew returns to Earth after what, from their perspective, was a one-year voyage. But due to time dilation (an effect of Einstein’s special theory of relativity), a century has passed at home. The protagonist, meeting his now-elderly granddaughter, mourns: “Though I’m older but a year, your mother’s eyes from your eyes cry to me.”

Auto-tuning was all the rage in pop music a decade or so ago, but never did it carry as much intellectual oomph as when it was applied to Carl Sagan and Stephen Hawking. A bit cheesy? Perhaps. Still kind of wonderful? We think so.

A heartfelt tribute to the marvels of particle physics, this ditty showcases the vocal dexterity of Gia Mora, a.k.a. Einstein’s Girl. Mora is also a member of Hollywood science advocacy group Scirens.

Update! As hoped, readers have been submitting their own favourite science-savvy songs via Twitter. Here’s the list of fan-faves so far: