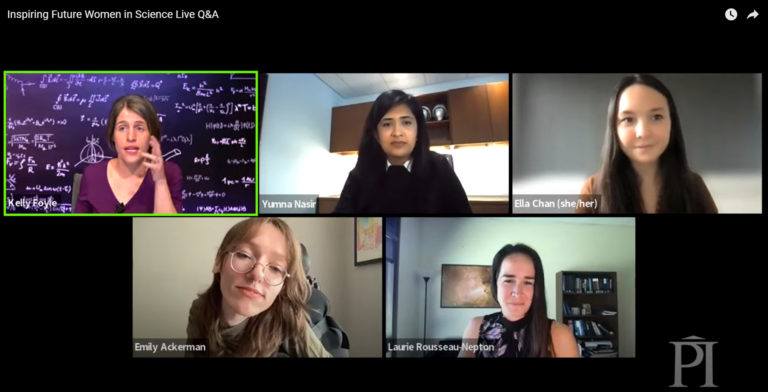 From her native Brazil, Julia Fernanda de Lucas Rocha tuned in to a live webinar hosted by Perimeter Institute.

There, she saw something she doesn’t normally get a chance to see: four successful women from underrepresented communities, talking passionately about their work in traditionally male-dominated professions, and how they overcame challenges to get where they are today.

Speaking as part of this year’s “Inspiring Future Women in Science” event, the four women were Emily Ackerman, a systems biology postdoctoral researcher and disability community activist; Ella Chan, a medical student and digital media outreach specialist; Yumna Nasir, a construction and facilities management director; and Laurie Rousseau-Nepton, an astronomer based in Hawaii who is an Innu woman and a member of the Mashteuiatsh community (Pekuakamiulnuatsh First Nation) in Quebec.

The live question-and-answer webinar was sponsored by Linamar Corporation and took place on February 10, tied to the United Nations International Day of Women and Girls in Science.

The event was launched in 2015 as part of Perimeter’s outreach efforts aimed at encouraging young women interested in science and technology.

Among other annual initiatives, the Institute also runs the International Summer School for Young Physicists, a two-week online program for Canadian and international high school students, and the Simons Emmy Noether Fellowship Program, which supports early-career women in physics.

The speakers work in vastly different fields, but their stories shared a common theme: Throughout their journeys, they’d had a distinct lack of mentors who resembled them. Now, they’ve become those mentors and role models, hoping to inspire and guide the younger generation.

Rocha, a physics graduate student at Souza Marques Technical Foundation, was one of 109 university and high school students from 13 countries who took part in the webinar. She is also in a program at the Brazilian Center for Research in Physics in Rio de Janeiro. She is completing her master’s with a focus on condensed matter research and plans to pursue a PhD in the field.

“We still see more men than women studying in these areas around the world,” Rocha says. “But we are in the 21st century, and so why should there not be more women in engineering, math, physics, chemical fields?”

After hearing the panellists’ stories, Rocha says, “I felt inspired to continue my study in physics, get my PhD, and be a helpful woman for others.”

Yumna Nasir is the national director of operations in the technology arm of the Plan Group, an electrical, mechanical, and technology construction company based in the Toronto area. On the panel, Nasir told the young women participants that they can lead the way and help open doors for others.

“Just because you don’t see someone who looks like you, you should not let that stop you from fulfilling your journey,” Nasir said. “If you truly are passionate about it, go out and do it.”

Emily Ackerman, a systems biology postdoctoral researcher at Harvard Medical School and disability activist who uses a power wheelchair, said that being disabled changed the way she thought about and approached science.

It shaped her path to becoming a computational research scientist who works with data. “I’m physically unable to be in a lab lifting things, and so I can’t, for example, use Bunsen burners. Instead, I use computers. That changes the way that I think about how I want to answer questions,” she said. “I think about, ‘OK, what can I do with the data that I have?’”

Meanwhile, astronomer Laurie Rousseau-Nepton, who is based at the Canada-France-Hawaii Telescope in Hawaii, said it’s important to never be limited by what others think you are good at or should pursue.

Rousseau-Nepton said physics wasn’t her best subject when she was in high school. She was great at biology, chemistry, math, and other subjects, but physics was challenging. Nevertheless, she enjoyed it, and so she pursued it. Her physics marks shot up when she studied the field more in graduate school – a direct result of doing what she loved.

In her current role as a resident astronomer at the telescope in Hawaii, she formed a team of 60 researchers from around the world involved in SIGNALS, an observing program designed to investigate massive star formation in numerous galaxies close to the Milky Way.

“You should follow your gut,” Rousseau-Nepton said. “If you love what you do, then you will get good at it over the years. You have so many years ahead and so many things to learn.”

Ella Chan, a medical student at the University of British Columbia, said her own path was an unconventional one. Her long-term interest in medicine was sparked after her brother was diagnosed with a kidney condition. Along the way, she also founded the digital media company STEM Files and worked as a digital media outreach specialist with Genome British Columbia.

She said when applying to medical school or other programs, it’s not necessary to follow the conventional roadmaps. “Do something that you enjoy doing, not just something that fits into an application box,” she said.

The panellists spoke about the joys and the challenges of their careers.

Nasir said her greatest joy comes from seeing a project completed and come to life. Whether it is a hospital, a music theatre, or a light-rail transportation line, “It’ll be there long after I am gone. It is very exciting to be able to leave that legacy behind.”

Ackerman said the biggest challenge is tuning out self doubt: “It’s very easy to convince yourself that you’re not ready or that you shouldn’t be doing science. But really, that’s all in our heads. It does get better, and you will feel much more assured of your abilities if you just keep working at it.”

Linda Hasenfratz, chief executive officer of Linamar Corporation, said it is exciting to see the number of women in science, technology, engineering, and math (STEM) disciplines go up.

As a rare woman chief executive in a manufacturing company, getting more young women into these fields is something she has long been passionate about. Her company launched the “See it • Be it • STEM it” initiative to encourage and empower young women who are interested in STEM disciplines. The initiative includes a website that tells the stories of women role models in STEM and an annual calendar that features their stories.

After watching the event from Brazil, Rocha says she became more motivated to become one of the role models of the future.

“This webinar was an inspiration,” she says. “We are starting a journey.”