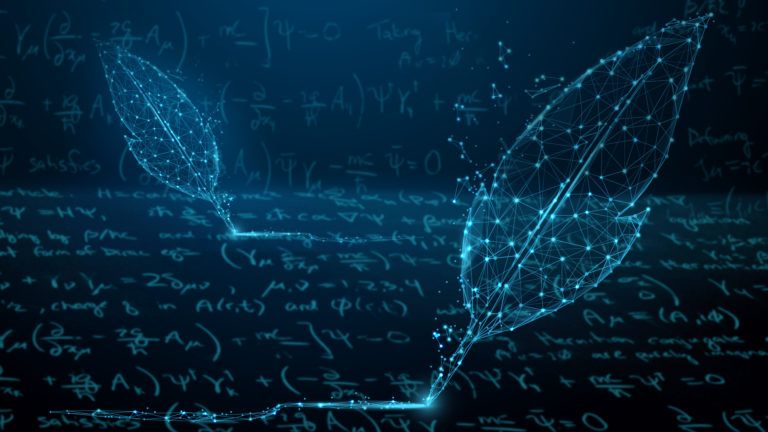 It can be said that science and poetry share the common purpose of revealing profound truths about the universe and our place in it.

Physicist Paul Dirac, a known curmudgeon, would have dismissed that idea as hogwash.

“The aim of science is to make difficult things understandable in a simpler way; the aim of poetry is to state simple things in an incomprehensible way,” Dirac grouched to a colleague.  “The two are incompatible.”

The colleague to whom Dirac was grumbling, J. Robert Oppenheimer, was a lover of poetry who dabbled in it himself — as did, it turns out, quite a few great physicists, past and present. Physicists have often turned to poetry to express ideas for which there are no equations.

Here’s a look at some of the loveliest stanzas from physicists past and present, plus a few selections of rhyming silliness that get an A+ for effort.

Considering his reported distaste for poetry, it seems Dirac may have committed a few lines to verse. A four-line poem credited to Dirac laments the belief that, once past the age of 30, physicists have already passed their peak intellectual years. 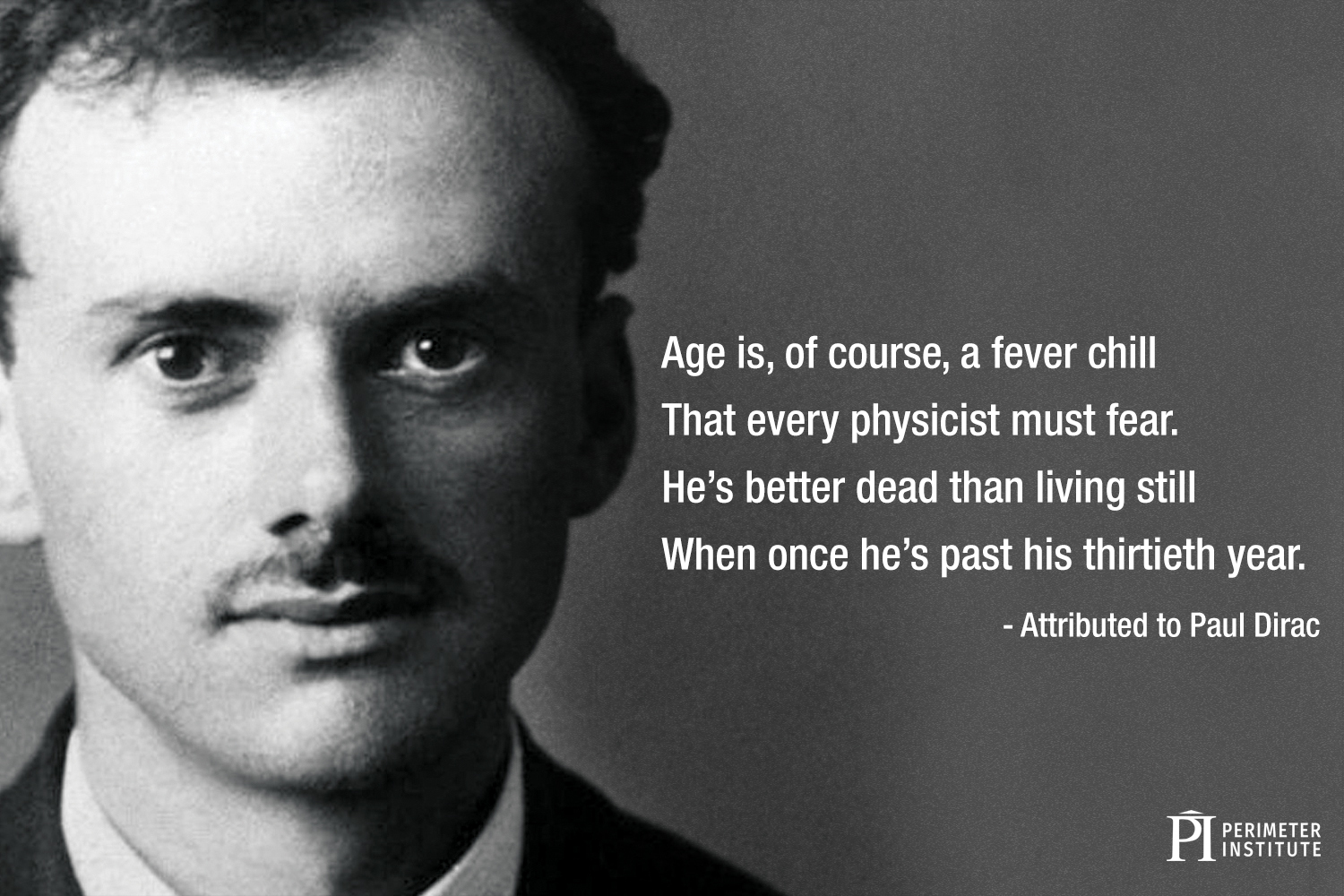 Perhaps the most prolific of all the poetic physicists was the Scottish genius whose equations for electromagnetism have been called “the second great unification in physics” (second to Isaac Newton’s marriage of physics and astronomy).

Maxwell’s best-known poetic composition is “Rigid Body Sings,” a ditty he used to sing while playing guitar, which is based on the classic Robbie Burns poem “Comin’ Through the Rye” (the inspiration for the title of J.D. Salinger’s The Catcher in the Rye). In terms of melding poetry and physics, however, Maxwell’s geekiest composition might be “A Problem in Dynamics,” which shows both his brilliance and sense of humour. 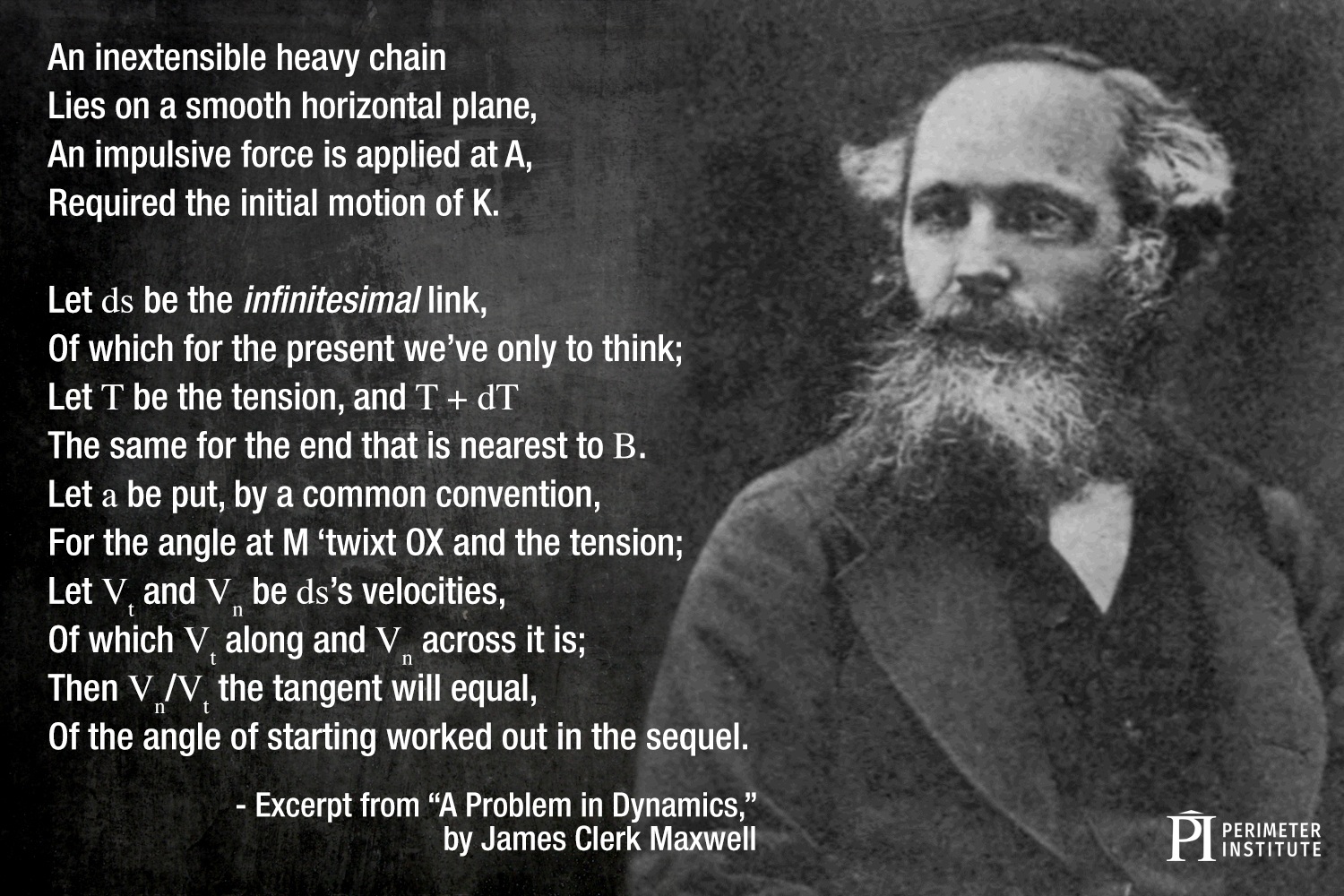 If Maxwell’s “A Problem in Dynamics,” is a little too technical for your mathematical comfort level, his fellow Scottish physicist William J.M. Rankine penned poetry requiring only a rudimentary understanding of algebra (and a peculiar understanding of love). 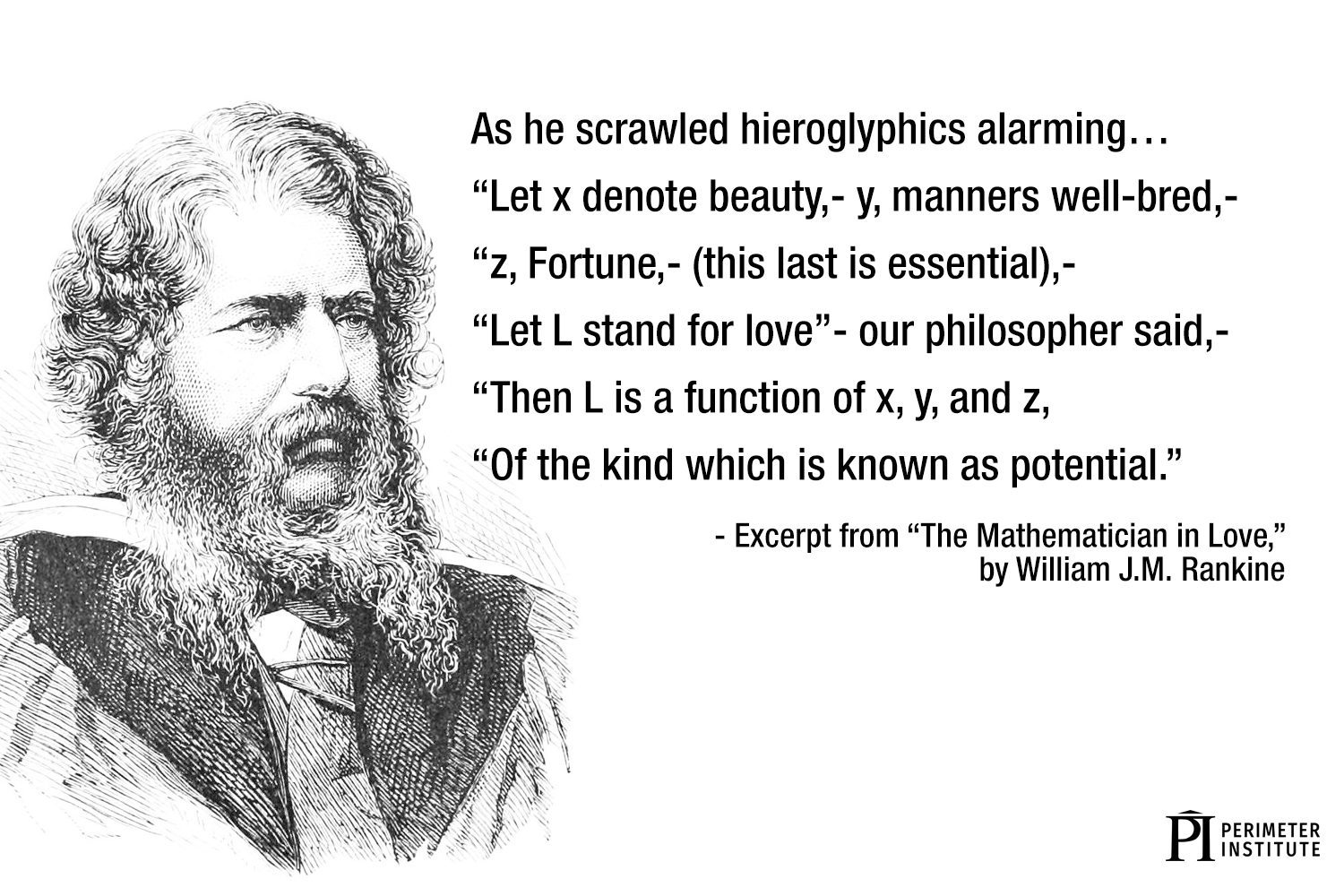 Richard Feynman was known for both his brilliance and his eclectic lifestyle, which included playing the bongos, safe-cracking, and, occasionally, writing poetry. 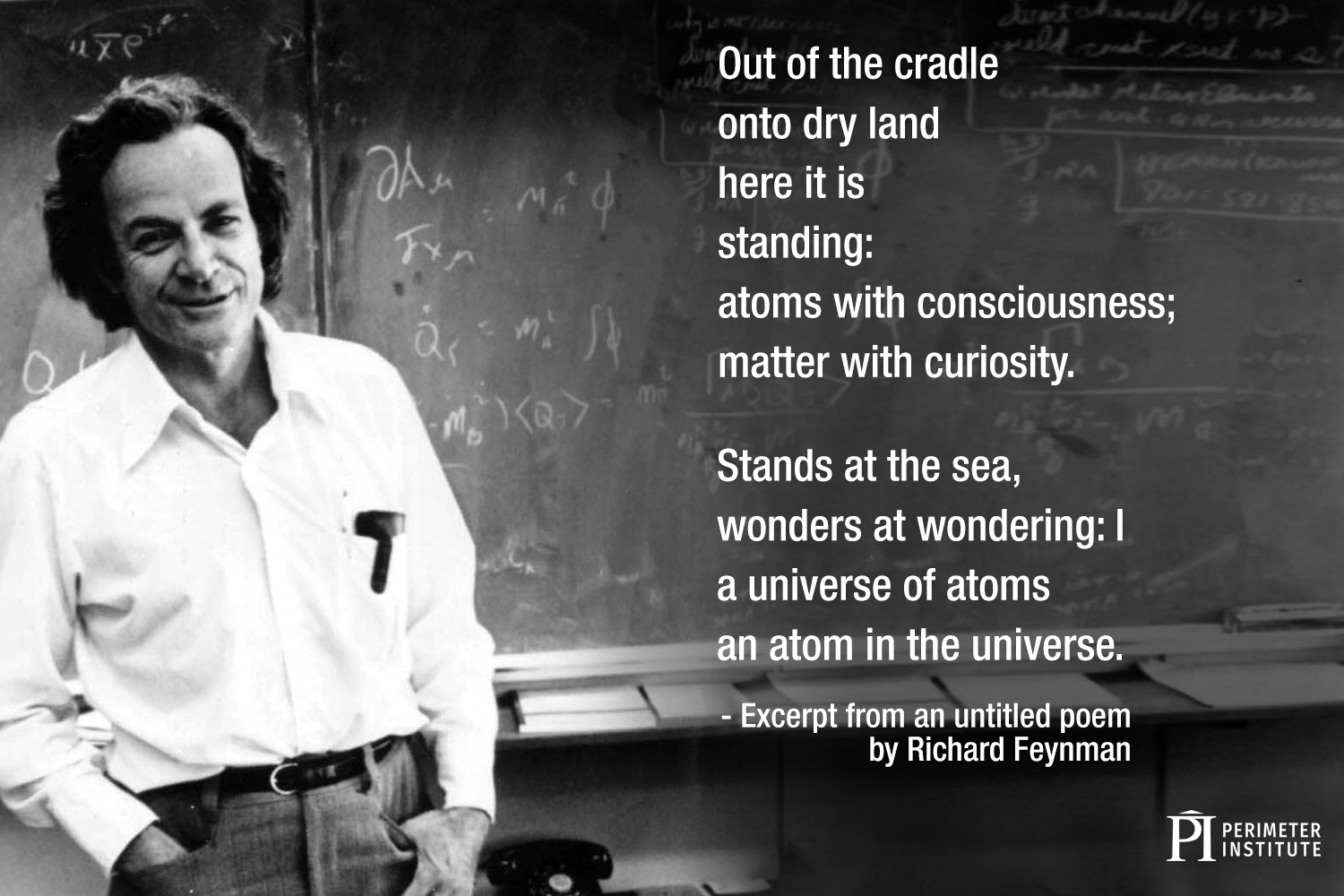 Although theoretical physics is her specialty, Shohini Ghose is a true polymath. Born in India, educated in the US, and now a multi-award-winning professor at Wilfrid Laurier University, Ghose has delivered popular talks on subjects ranging from climate change to sexism in science. She recently joined Perimeter Institute as an affiliate researcher and an Equity, Inclusion & Diversity Specialist. On top of all that, she is a poet too. 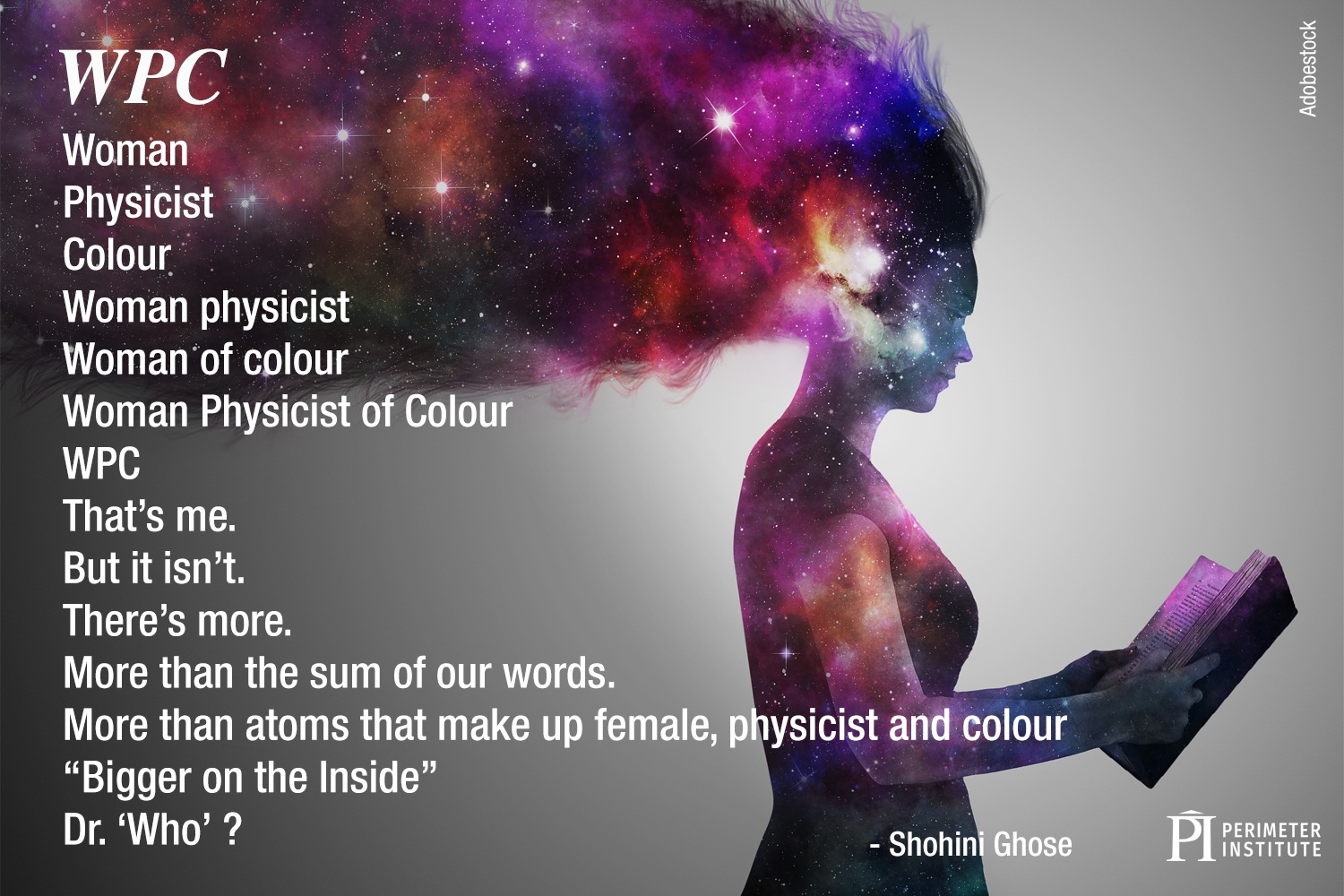 English mathematician James Joseph Sylvester was a prolific scholar whose collected works on matrix theory, number theory, and combinatorics fill four (large) volumes. In his honour, the Royal Society of London bestows the Sylvester Medal every two years to an early-career mathematician who shows potential to make major breakthroughs, just as the medal’s namesake did. It is only fitting that Sylvester’s best known work of poetry is an ode to a missing part of an algebraic formula. 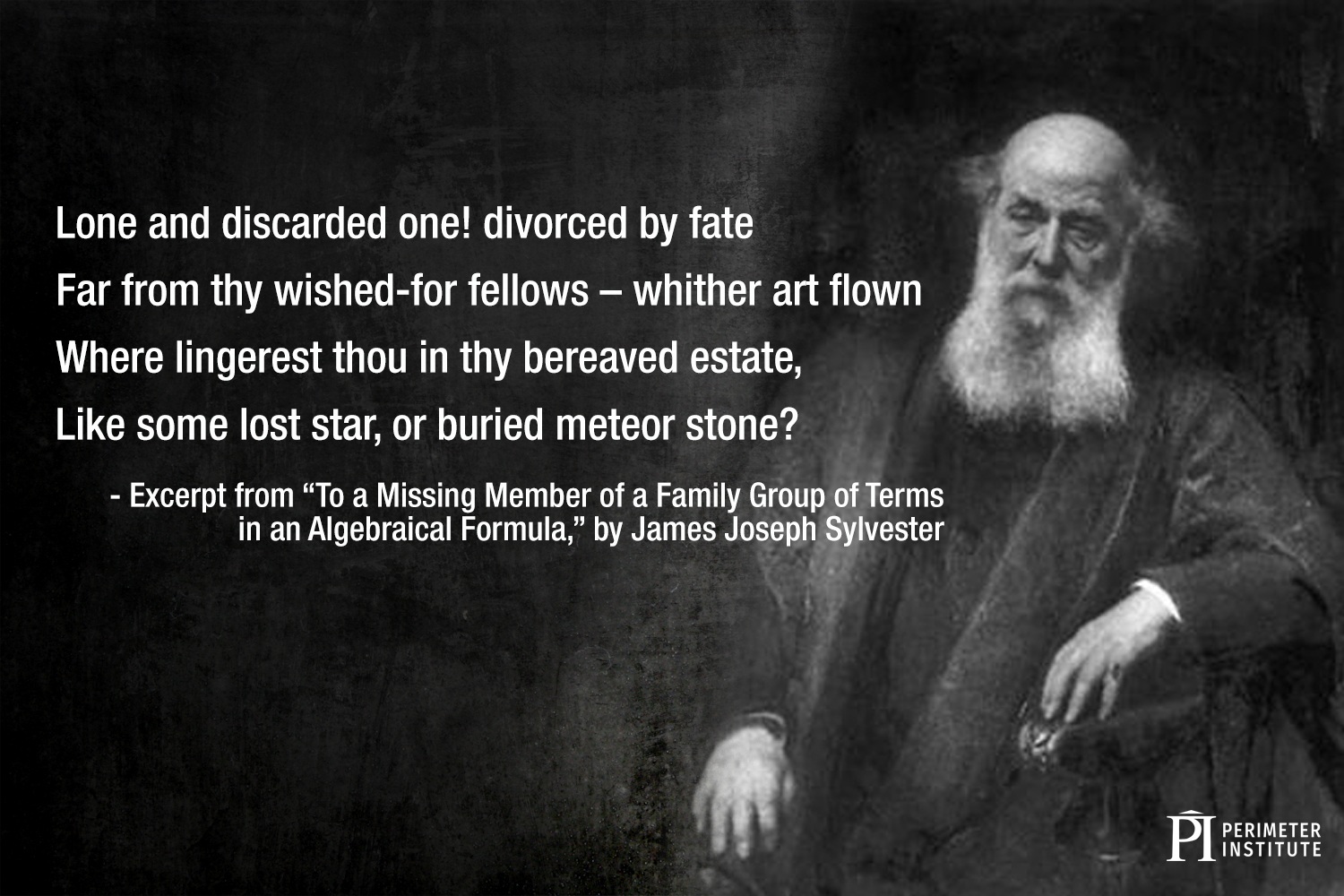 Sonali Mohapatra is a Chancellor’s PhD Student at the University of Sussex and an alumna of the Perimeter Scholars International master’s program (during which she sang on the nationally broadcast CBC Radio program Ideas). She’s also the author of the poetry compilation Leaking Ink and runs an international magazine on creative resistance called Carved Voices. In her spare time — which, remarkably, she occasionally has — she delivers motivational talks on physics, feminism, and the juxtaposition of the personal and the professional. 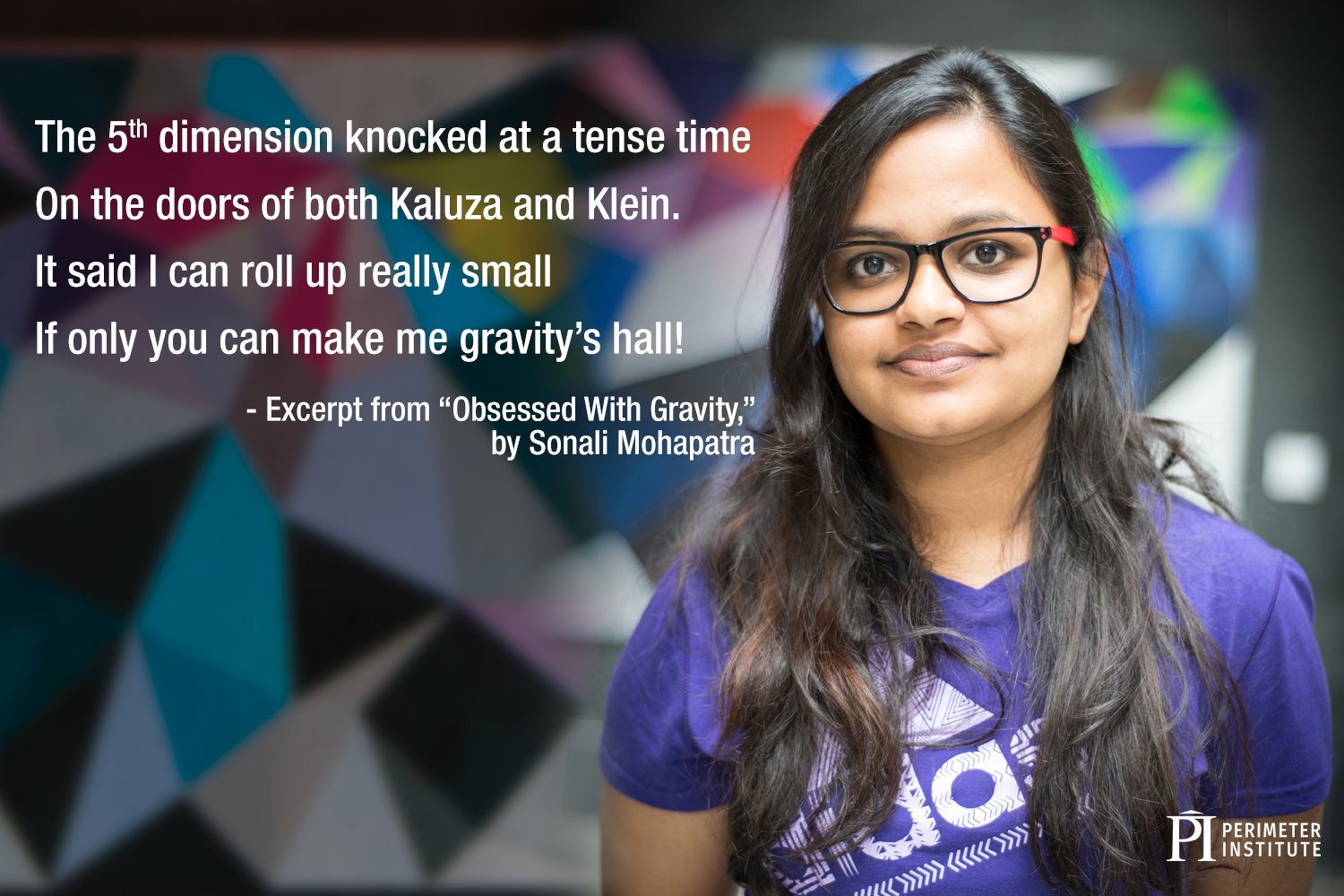 William Rowan Hamilton was an extraordinary mathematician whose research had long-lasting implications for modern physics. As a poet, he was a bit of a hack, at least in the eyes of his friend and renowned poet William Wordsworth. Hamilton often sent his poems to Wordsworth for feedback, and Wordsworth went to great pains to provide constructive criticism without hurting his friend’s feelings. Upon reading one of Hamilton’s poems, Wordsworth replied: “I do venture to submit to your consideration, whether the poetical parts of your nature would not find a field more favourable to their exercise in the regions of prose.” Translation: don’t quit your day job, Bill. Here’s one of Hamilton’s better works — a tribute to another giant of mathematics and physics, Joseph Fourier. 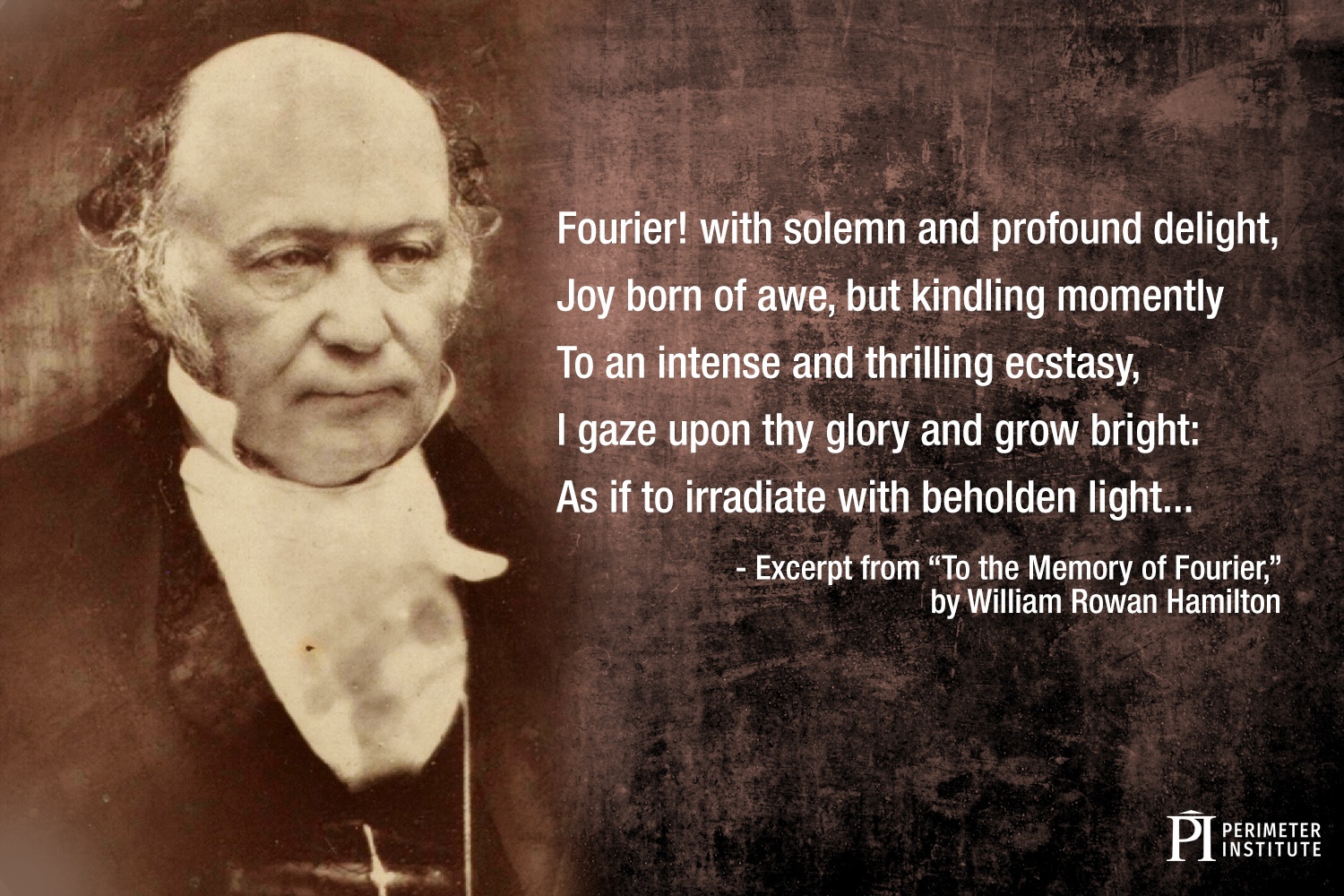 For some lyrical physicists, poetry is not always a hobby separate from scientific research. For some (at least one), poetry is a way to present scientific findings. In 1984, Australian physicist J.W.V. Storey published a research paper — The Detection of Shocked Co/ Emission from G333.6-0.2 — as a 38-stanza poem. To any present-day researchers reading this: we dare you to try it. 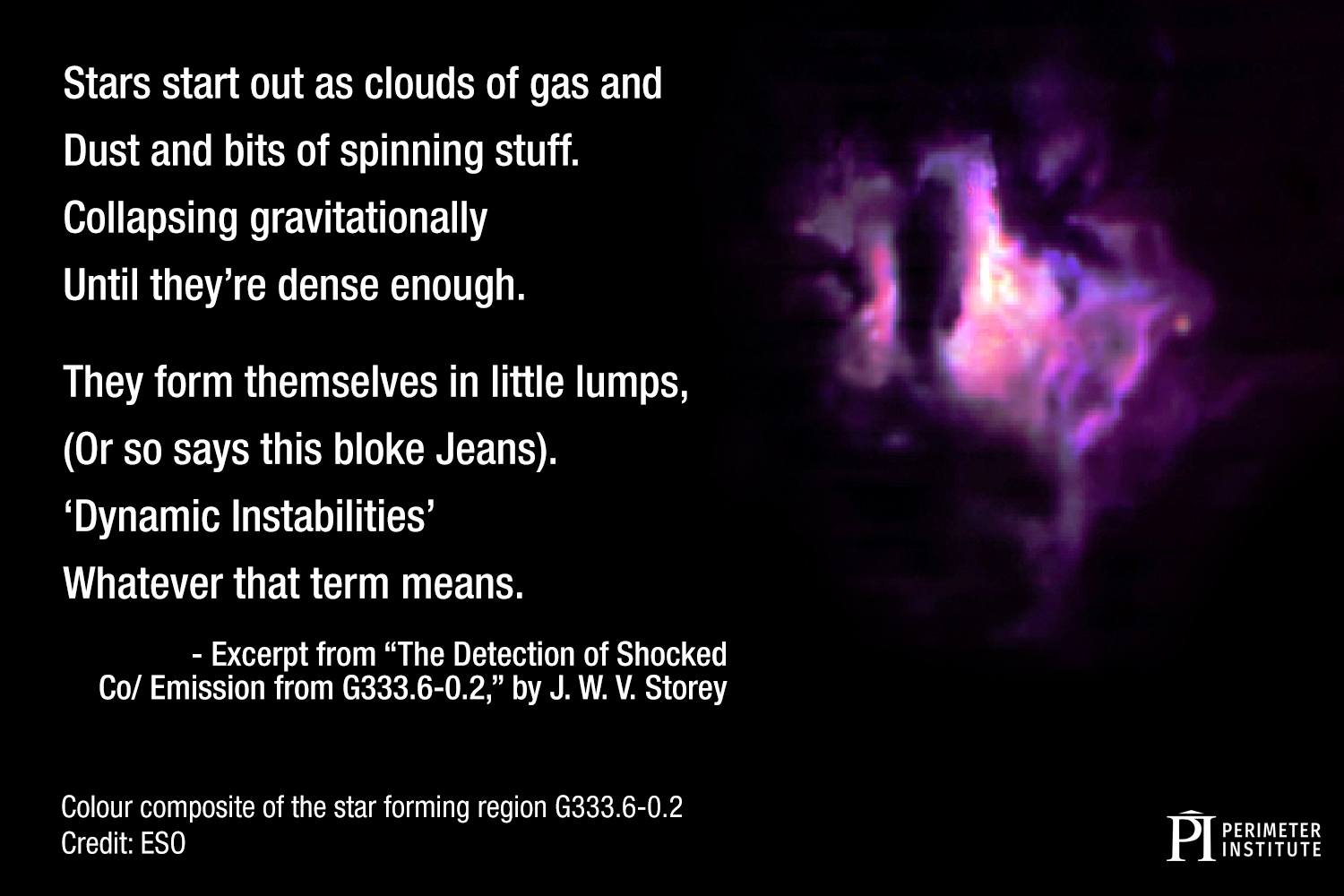 Caltech physicist John Preskill is one of the world’s leading researchers exploring quantum information and the application of quantum computing to big questions about spacetime. Those are extremely complex topics, but Preskill also has a knack for explaining complicated subjects in accessible (and, occasionally, rhyming) terms. Here’s a snippet from a poem he wrote called “Quantum Cryptography.” 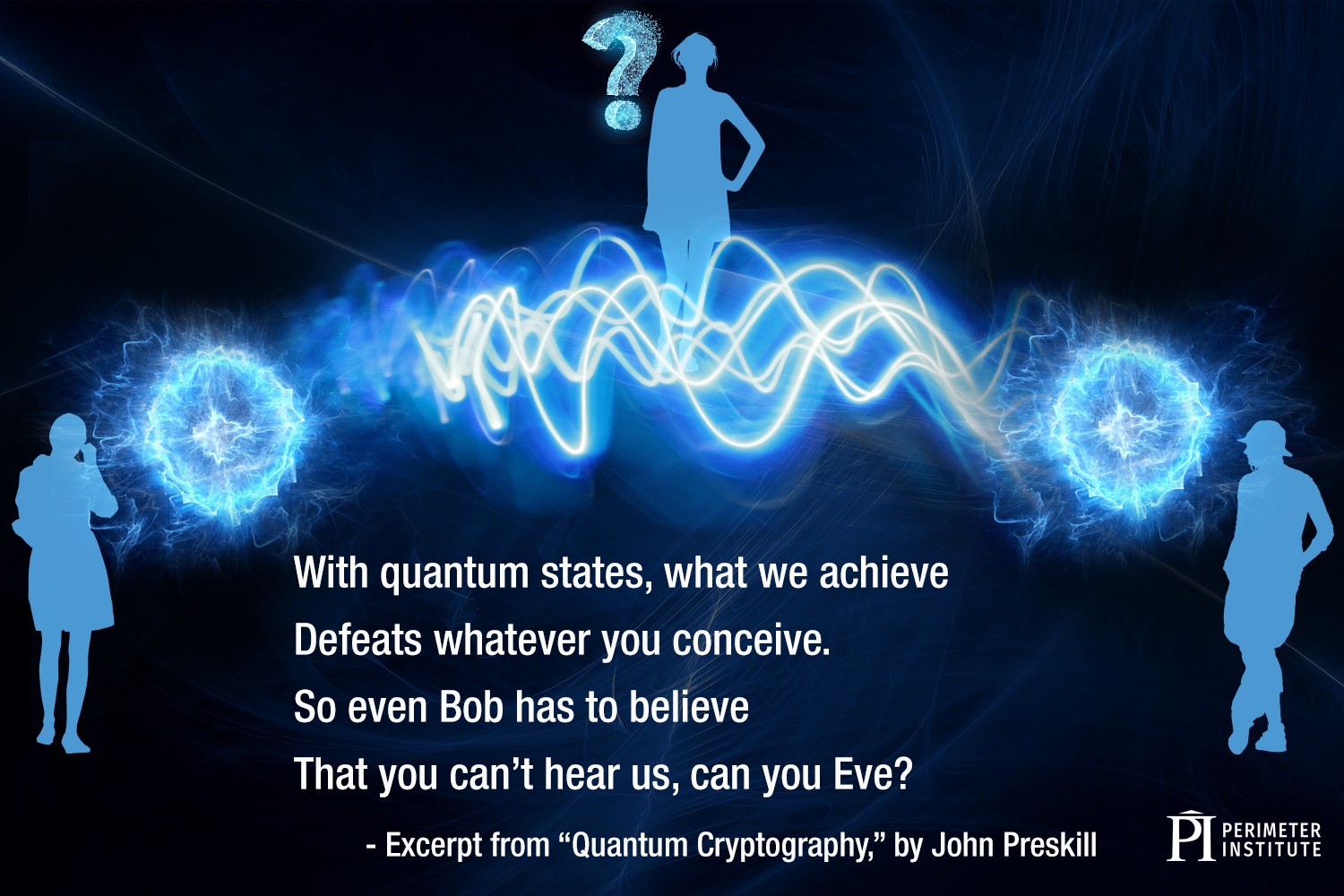 Nitica Sakharwade is a PhD student who, when not tackling foundational puzzles in quantum mechanics and quantum information, writes poetry and performs spoken word. In fact, she’s performing at the Canadian Festival of Spoken Word in October 2018. Her poems use physics imagery and metaphors to explore her identity and examine profound themes, such as determinism via the Chandrasekhar limit (the mass threshold that determines whether a white dwarf star will explode in a cataclysmic supernova). 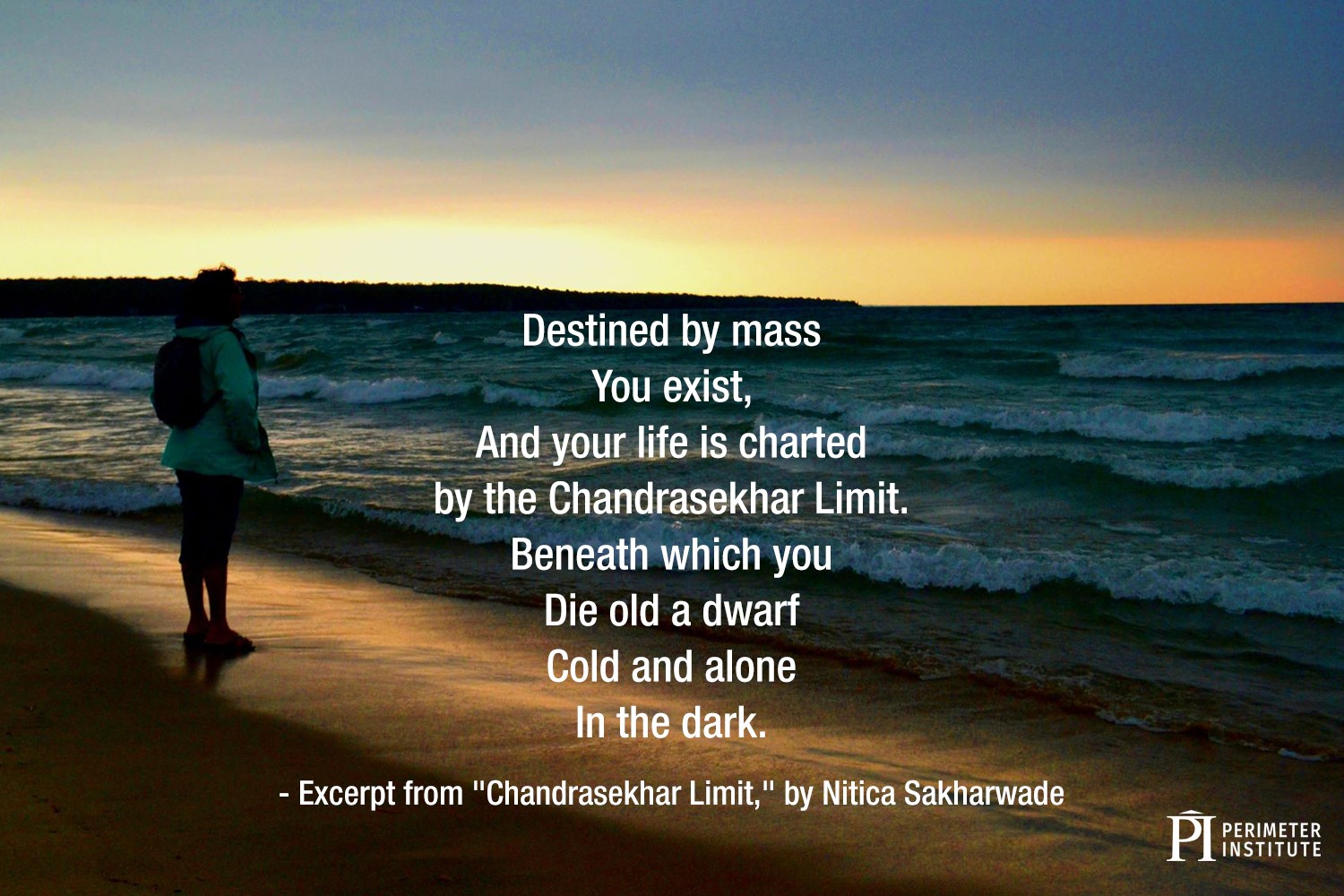 David Morin is a physics professor at Harvard who has become somewhat legendary for sprucing up his lessons with physics-based limericks. Some are quite catchy and impressively whittle a complex subject down to a set of simple rhyming verses, like the one below about Emmy Noether’s landmark theorem. 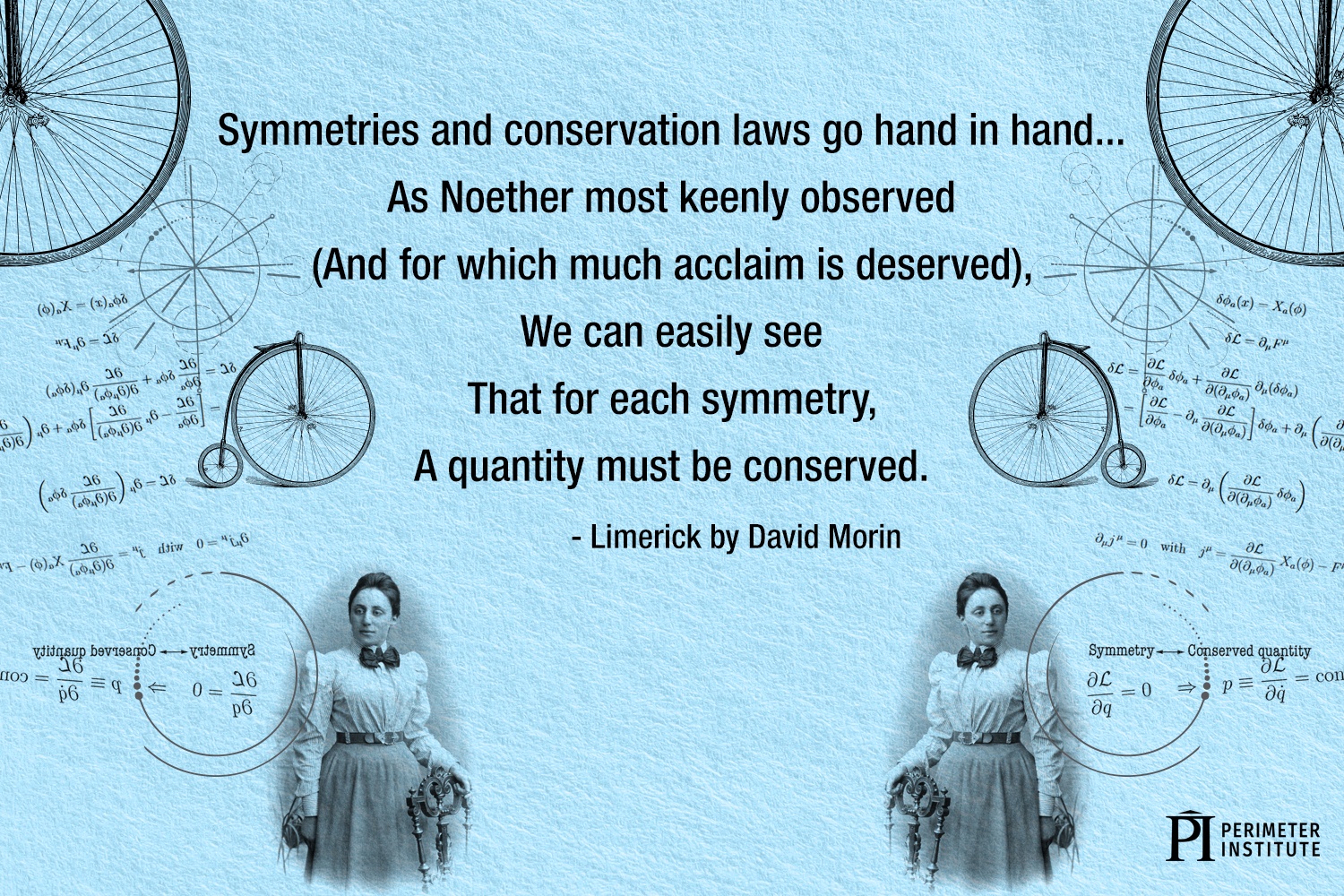 Other poems by Morin — such as this one, explaining how a medium other than a vacuum would affect a classic experiment — border on the absurd. 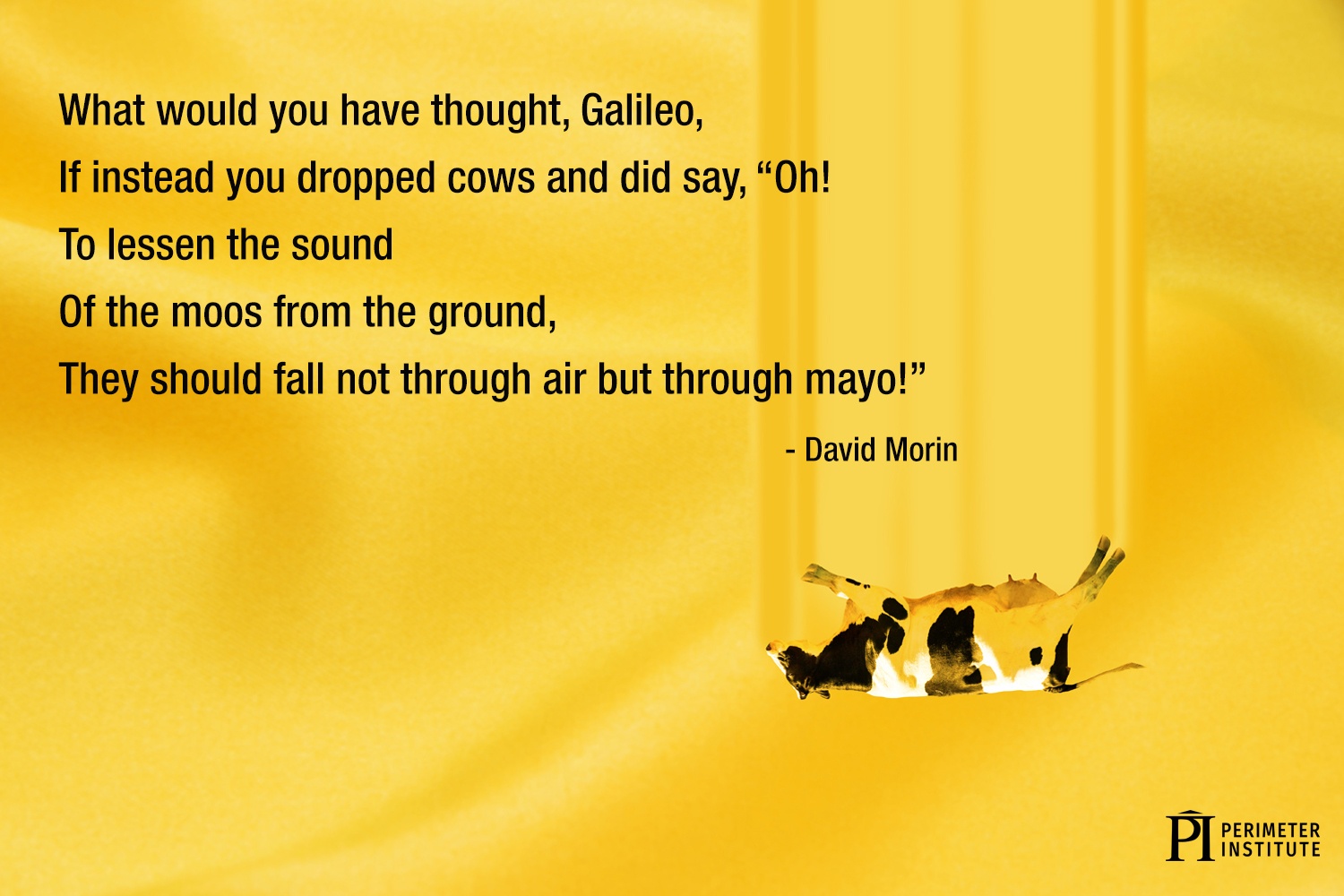 Lastly, we can’t resist sharing a poem by the brilliant Katharine Burr Blodgett, a physicist and chemist who, among other achievements, invented non-reflective “invisible” glass. That glass became very useful in filmmaking and was first put to use by Hollywood in a little movie called Gone With the Wind. After she retired from a long and successful career at General Electric (where she also pioneered materials to de-ice airplane wings, among many other innovations), she amused herself by writing quirky poetry. 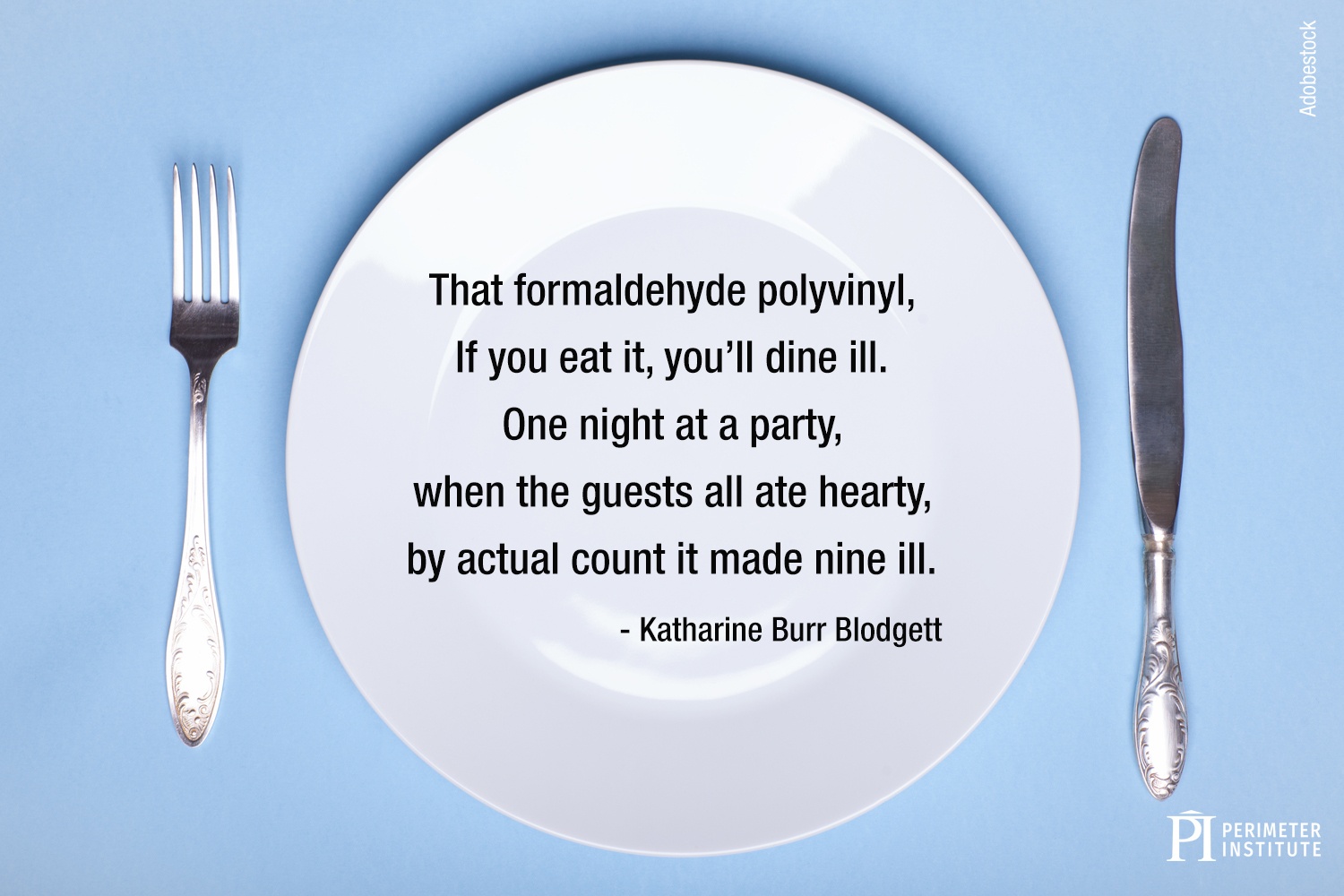 Katie Mack, better known as @AstroKatie to her 280,ooo or so Twitter followers, recently visited Perimeter Institute and let us know that she had just penned a poem, released stanza-by-stanza on social media. It is called Disorientation, and it expresses the kind of reverence and awe for the universe that keeps her eyes turned skyward and inspires her awesome work in science communications. 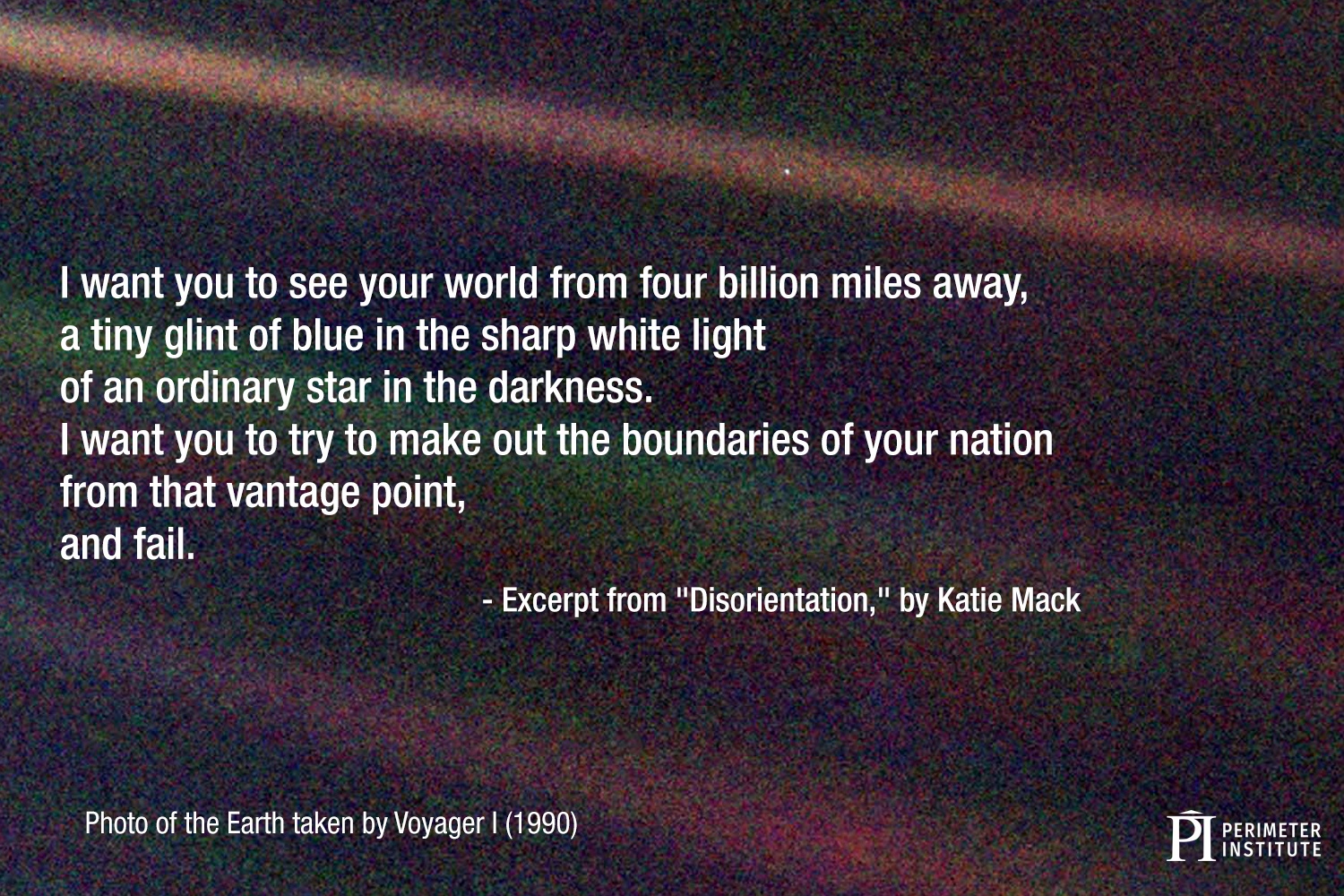