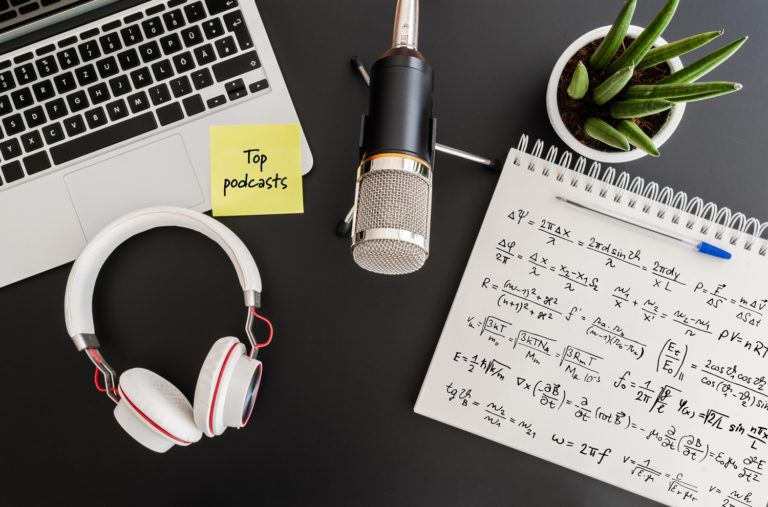 Podcasts are an amazing way to expand your horizons in an increasingly hectic world. What better way to learn a bit of quantum physics than while also doing the dishes or driving on a summer road trip?

We asked some scientists and podcasters to share their favourite podcasts on physics, astronomy, and other big questions in science. 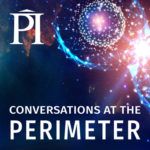 Now, onto our other favourite podcasts, which have provided us much inspiration and entertainment.

Sean Carroll is a theoretical physicist at Caltech and a science popularizer who has written for The New York Times and appeared on The Colbert Report. His Mindscape podcast features fascinating conversations with brilliant minds from many fields, but naturally he also often chats with colleagues in physics, including Brian Greene, Janna Levin, Roger Penrose, and Carlo Rovelli.

We asked Carroll to share his own favourite science podcasts, and he recommended the next two on our list. 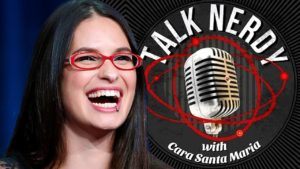 Cara Santa Maria is an American science journalist who you may have seen interviewed on CNN, late-night talk shows, or on the Netflix series Bill Nye Saves the World. Along with guest-hosting the excellent Skeptics’ Guide to the Universe podcast, she hosts Talk Nerdy – tagline: “Conversations with interesting people on interesting topics” – which drops every Monday on most podcast providers.

Alie Ward is a Daytime Emmy-winning science correspondent who appears on TV and streaming shows including Brainchild, How to Build… Everything, and Food: Fact or Fiction. In her Ologies podcast, she chats with experts from, well, various ologies: epidemiology, hydrology, selechimorphology (that’s the study of sharks), and many more.

A few we recommend for physics and space buffs: “Radiology with Varshana Gurusamy”; “Areology (MARS) with Jennifer Buz”; and “Cosmology with Katie Mack.”

Mack, the guest on that third episode listed above, is an astrophysicist and will soon become a Simons Emmy Noether Fellow at Perimeter Institute. We asked her to recommend a few of her favourite podcasts and, along with Ologies, she suggested the next two on our list.

The host of this show, Dr. Ben Tippet, believes “anyone can understand physics,” and he challenges his academic guests to explain in accessible terminology things like black holes and quantum mechanics. Mack says it is “definitely a good brain-stretch for people who love physics!”

This podcast, which came highly recommended by a number of the people we polled, uses scientific analysis to examine “possible and not-so-possible futures,” such as machines that could translate animal languages for us, or the replacement of human police by robocops.

This popular and long-running podcast, hosted by Jad Abumrad and Robert Krulwich, tackles a broad range of topics – from aeronautics to zombie cockroaches and practically everything else.

Every episode of this podcast starts with a simple question – such as Does brain size matter? or Is nuclear fusion coming anytime soon? – and then experts explore the not-so-simple answers. Novelist and Perimeter science writer Erin Bow says her kids love this one because it feels like “a MythBusters of radio.” She recommends an episode about particle physics called “Will we ever know what the universe is made of?” 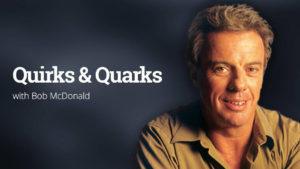 Canada’s longest-running radio show about all things science has been on the air for nearly 40 years, and is available in podcast form. Although this show covers every conceivable subfield of science, we can’t help but recommend a pair of fascinating recent episodes in which host Bob McDonald talks to Perimeter scientists Avery Broderick (about the recent landmark image of a black hole) and Lee Smolin (about his new book, Einstein’s Unfinished Revolution). Oh, and check out the Quirks & Quarks Questions Roadshow recorded at Perimeter in 2015. You know what? Just listen to all of them.

This podcast, which promises to help you “learn real science by taking a sci-fi journey,” was recommended to us by theoretical physicist and graphic novelist Clifford V. Johnson (who delivered a wonderful public lecture at Perimeter earlier this year). Hosted by physicist Matt Stanley and filmmaker Philip Shane, this show uses science fiction as a launching pad to “explore the science of space, cosmology, biology, life, the universe, and everything.” Check out the episode “The Notorious BIG… BANG!” to hear them tackle the birth of the universe.

Recommended listens: “The story behind the first ever black hole image,” “A quantum leap for industry.” 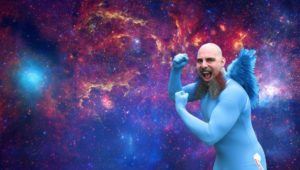 Ethan Siegel is among the most prolific and enthusiastic communicators about all things astrophysical. Along with his Starts with a Bang podcast, he writes articles under the same banner on Medium and Forbes, and live-blogs many of Perimeter’s public lectures.

A fascinating recent episode explores “the most important equation in the universe.” We asked Siegel which podcasts he listens to when not recording his own, and he recommends the next two on our list.

Created by Fraser Cain (editor of the excellent astronomy website Universe Today) and Pamela L. Gay (Senior Scientist at the Planetary Science Institute), Astronomy Cast explores a universe of ideas. The series has hundreds of episodes online – and a People’s Choice Podcast Awards nomination. This one will appeal to astronomers and amateur space buffs alike.

Astrophysicist and “agent to the stars” Paul M. Sutter is a passionate science communicator whose work has been published by Space.com, Universe Today, Scientific American, and more. On Ask a Spaceman!, available as both a podcast and YouTube show, he answers audience questions on topics including solar eclipses, wave-particle duality, antimatter, and loads more.

Suggested listens: “How do we measure the expansion of the universe?,” “Is everything a wave or a particle, and why does my head hurt?”

14. This Week in Science

Host Dr. Kiki (neuroscientist Kirsten Sanford) leads this weekly look at the latest news from the wide world of science, with interviews and irreverent commentary from co-hosts and guests. The podcast’s website is helpfully categorized by subfield so you can easily find episodes about your particular interests, whether physics, black holes, or chickens.

Dr. Kiki recommended the next two podcasts on our list, especially for young listeners.

Host Molly Bloom and a rotating cast of young co-hosts tackle questions about the natural world in this “podcast for kids and curious adults.” Topics typically bear a childlike sense of wonder and playfulness – the episode on the science of farts is enduringly popular among listeners – but convey fascinating facts and inspire critical thinking. 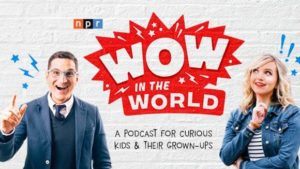 This NPR podcast features hosts Mindy Thomas and Guy Raz as they examine scientific topics of vital interest to younger listeners, such as the science of slower-melting ice cream. For the kids: lively delivery and offbeat topics (wombat poop!). For the parents: so much enthusiasm that kids can’t help but want to be curious and keep exploring.

This one comes highly recommended by Shohini Ghose, a quantum scientist, TED Fellow, and Perimeter’s Equity, Diversity & Inclusion Specialist. Spacepod is the brainchild of Ghose’s “amazing asteroid-hunting astronomer friend” Carrie Nugent, who chats with NASA experts on a variety of spacey topics. Ghose appeared on an episode about quantum entanglement, and we also recommend an episode about the search for extraterrestrial life with Dr. Sara Seager.

Did we leave one of your favourite podcasts off the list? Give us your recommendations in the comments below or on Twitter!

(Never listened to a podcast before? This handy guide will help get you started.)