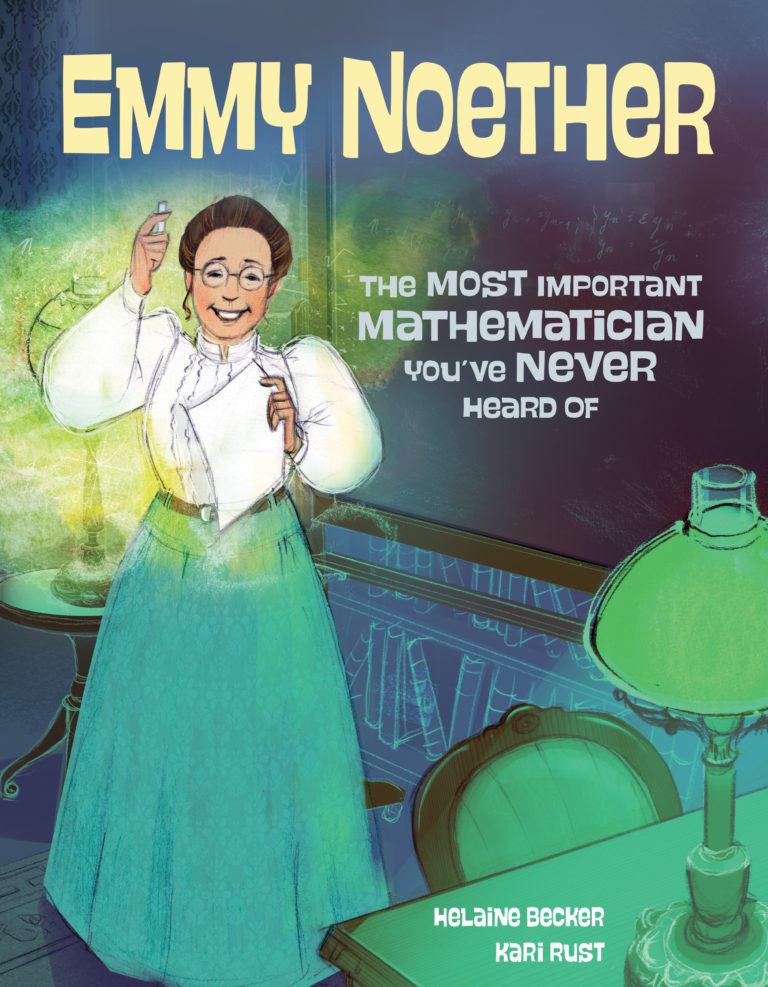 Messy, funny, loud, and one of the most important mathematicians the world has ever seen: In science circles, Emmy Noether (pronounced NER-ter) is famously not famous, though her theorems underpin crucial areas of modern physics.

Born in Germany in 1882, Noether’s story was buried beneath biases against women and Jewish people.

When Lisa Lyons Johnston, President and Publisher of Kids Can Press, first learned about Noether, she knew she had to bring the story alive for children. This week, the Canadian publisher is releasing Emmy Noether: The Most Important Mathematician You’ve Never Heard Of, a smart and charming book for young readers written by Helaine Becker, illustrated by Kari Rust, and edited by Stacey Roderick.

Lyons Johnston had just finished serving two terms on the board of the Ontario Science Centre and was looking for another opportunity to advocate for the science community when she heard about Perimeter Institute and the Emmy Noether Council. Becoming a member of the council was a perfect fit for the lifelong gender equity advocate who leads an award-winning publishing company where STEAM education for kids is a priority.

“Boys and girls, men and women, need to see more women in physics and science,” she says. “It’s so frustrating that people haven’t heard of her. I wanted people to know more about Emmy, who is a remarkable person in her own right, and also an inspiration for girls.”

Helaine Becker, the author of more than 90 books, including Counting on Katherine: How Katherine Johnson Saved Apollo 13, says this was the hardest one she has written.

“First of all, I had to really understand what Emmy Noether did — not in a superficial way, but in a deep way, or else I couldn’t explain it to others. And if that wasn’t enough to contend with, I also had to really dig into the theory of relativity,” Becker says. “I thought my brain would fry like a latke.”

Becker’s text and Rust’s illustrations show the hurdles Noether had to overcome to be taken seriously as a researcher. The book also simply and beautifully lays out her theorem — one that helped to solve a problem about how energy is conserved in Albert Einstein’s theory of relativity — in a way that will delight and inform children and adults.

During the research and writing process, Becker became completely enamoured with her subject.

Her first hope is that the book helps people understand that “Women and minorities are perfectly capable of doing math — of doing everything. Second, that they have always done them. The reason we don’t realize that is because their achievements have been ignored, stolen, or suppressed for generations,” she says.

“Third, I want people to know that math is something everyone can do and understand, and it is a natural and normal human language. You can learn it, just the way you can learn French or Swahili . . . Math and science are powerful, and beautiful, and fun.”

“The book is excellent for kids as it gives them a more diverse picture of who scientists are, and shows them that scientists are human beings,” he says. “As a physicist, I also loved that it exposes kids to some powerful scientific ideas that researchers around the world — including at Perimeter — still use today.”

Lyons Johnston says the trio of Becker, Rust, and Roderick knocked it out of the park and created something remarkable that Kids Can Press is really proud of. She hopes it just might change the trajectory for some young girls in science.

Learn more about Perimeter Institute’s Emmy Noether Initiatives, which aim to effect real change in the under-representation of women in theoretical physics.

Sonali Mohapatra writes about what it means for a young woman scientist to encounter Emmy Noether.