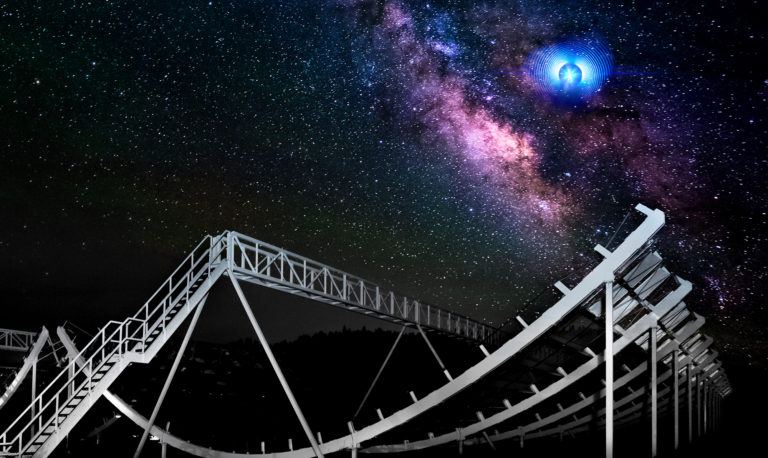 “Once a decade or so, astronomers discover a new type of mysterious event,” reflects Perimeter Faculty member Kendrick Smith. “In the 1960s, pulsars were an unexpected mystery; in the ’70s, gamma-ray bursts were a surprise, and so on. In the 21st century, our mysterious surprise is the fast radio burst.”

Fast radio bursts, or FRBs, are aptly named: they are brief pulses of radio-frequency light reaching Earth-bound radio telescopes. Incredibly bright, they release as much energy as our Sun does over 80 years, but last only microseconds – far less than the blink of an eye. They seem to be coming from very far away.

Scientists don’t yet know what causes FRBs. It’s perhaps the hottest puzzle in radio astronomy. But Smith and his Canadian collaborators are leading the way in assembling the puzzle pieces.

First discovered in 2007, FRBs are tricky to spot. In the two decades after that first discovery, only 25 additional FRBs were found. Puzzlingly, one and only one seemed to repeat. With the dearth of data, research into the causes and nature of FRBs could only creep forward.

That all changed with the commissioning of a new telescope, the Canadian Hydrogen Intensity Mapping Experiment, or CHIME.

The software is vital in spotting the microsecond flash of an FRB amid the torrent of data collected by CHIME – a terabyte a second, comparable to all the cellphone data in North America.

In January of this year, the CHIME team announced that they had discovered 13 new FRBs over a period of two months shortly after being turned on. What’s more, they’d found a second repeater. This unprecedented pace of discovery came even though the telescope was still in its pre-commissioning phase, running at only a fraction of its full capacity.

In August, the team announced that they’d continued spotting FRBs, including eight new repeaters. This rapid increase in detections comes even though the telescope is not yet running at full power; when it is, the CHIME team expects to see FRBs almost daily.

With this new data comes the possibility for new discovery.  The team is starting to pick apart the FRB signals and has found hints that repeating FRBs look different from those not yet observed to repeat.  This may suggest that the repeating and non-repeating signals spring from different origins.  Time — and more data — will tell.

“Discovering different types of FRBs at an unexpected rate, we will soon open new windows into understanding the cosmological origin of these high-energy astrophysical phenomena,” explained PhD student Rafiei-Ravandi, speaking to CNET.

“I think the upcoming year will be a really good one for FRBs,” said Victoria Kaspi, an astrophysicist at McGill University, in an interview with CBC News. “Are we going to know the answer in a year’s time? I don’t know. I don’t know. Maybe. But I think we will have made significant progress in a year.”

With the pace of discovery picking up, the fast-unfolding field of FRBs has gone from a crawl to a gallop.