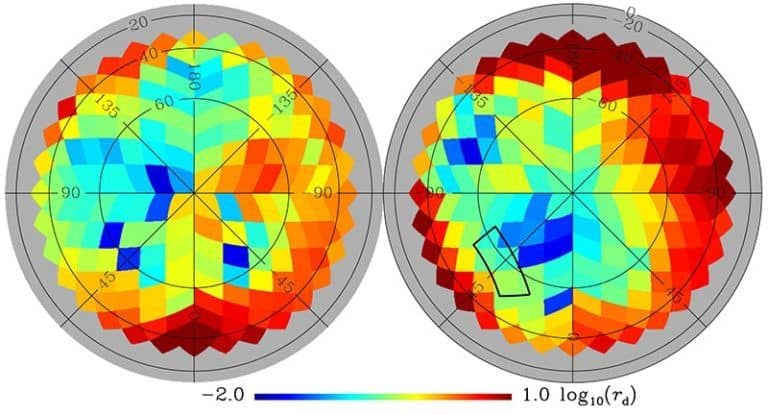 A patch of space above Antarctica seems to be dustier than anticipated, which may have led a group of astronomers to mistake contamination by dust for the signature ripples that would have been created by inflation, a proposed ultra-rapid expansion of the universe immediately after the big bang.

Last March, the Antarctica-based BICEP2 (Background Imaging of Cosmic Extragalactic Polarization) team announced the detection of what appeared to be primordial ‘B-mode’ polarization in the earliest light of the universe, the cosmic microwave background (CMB).

But the ripples detected by the BICEP2 team could have a more mundane explanation, according to new data announced this week by the European Space Agency’s Planck satellite mission.

The Planck team’s new sky map of cosmic dust suggests that the ripples detected by BICEP2 could be entirely due to galactic dust, emitted from a region of space between the BICEP2 telescope and the plasma of the very early universe which it was designed to observe.

The new result corroborates the concerns of some cosmologists, including Perimeter Institute Director Neil Turok, who urged caution and skepticism after the BICEP2 results were announced in March. With his collaborator Paul Steinhardt, Turok has proposed cyclic models of the universe which do not require a period of super-fast inflationary expansion, and which do not generate observable gravitational waves.

Turok says that, while the BICEP2 measurements themselves may have been accurate, they were unable to rule out dust because they only measured radiation at one frequency. Therefore, the BICEP2 results were never convincing as evidence for cosmic inflation.

“The new Planck results eliminate the evidence for primordial gravitational waves,” he said.

The BICEP2 results have been the subject of intense scientific discussion since they were announced. Perimeter Institute hosted the world’s first international conference on the subject, “Implications of BICEP2,” several weeks after the announcement.

The BICEP2 team initially interpreted their measurements as implying around 20 percent of the ripples measured in the CMB were caused by gravitational waves. This claim was, however, in tension with the Planck satellite’s previous measurements, as pointed out in a paper by Perimeter Faculty member Kendrick Smith and co-authors.

Turok has a longstanding bet with Stephen Hawking, who wagered that gravitational waves would be detected in the CMB. Though Hawking claimed victory following the BICEP2 announcement, Turok did not concede defeat. Subsequently, he and Hawking agreed to precise terms: the bet is for $200 (Canadian). If gravitational waves are detected above the given percent level, Hawking will win. Conversely, if the limit falls below five percent, as may happen in the next few months when the BICEP2 and Planck teams share and combine their data, Hawking will concede.

Since the new Planck results seem to limit the contribution of gravitational waves to less than 10 percent of the CMB ripples, Turok jokes that he is already “halfway to winning.”

Observations should be able to detect gravitational waves, if they are present, down to the one percent level within the next three to five years, Turok says, because many experimental groups are now building telescopes to search for the gravitational wave signal in the CMB.

“Of course, the bet isn’t really what matters,” says Turok. “What’s important is that we’re learning about what happened at the big bang, and ultimately we’re going to have a convincing theory that shows we truly understand it.”

Turok discussed the news this week on BBC Radio 4.