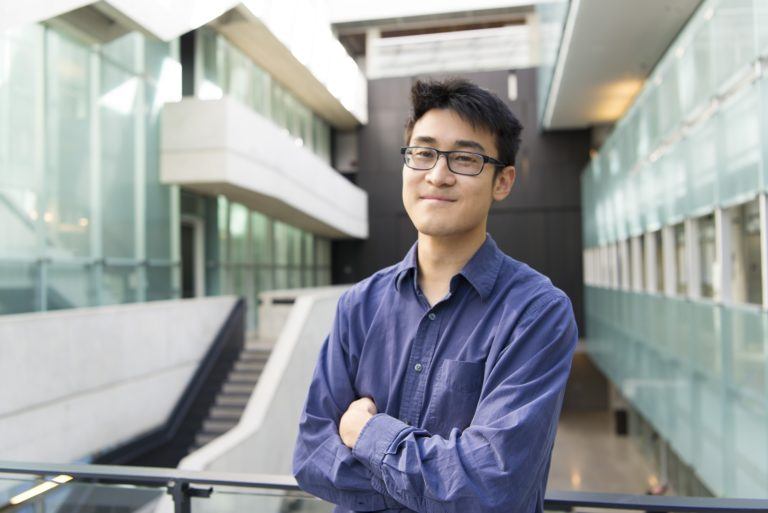 Physics is often a process of breaking things into smaller and smaller pieces to understand what makes it all tick.

Timothy Hsieh, however, works the other way. By coming up with new combinations of nature’s tiniest pieces, he creates blueprints for novel phenomena that could be more powerful than the sum of their parts by harnessing the intriguing power of the quantum realm.

“You have all sorts of different interactions to play around with, and they’re very tangible things that you can simulate on your computer or you can propose for an experiment,” he says. The goal is to come up with a design that, when put together in a particular way, produces new phenomena. “You can be creative – that’s key for me,” he adds.

Hsieh works in condensed matter, specializing in exotic phases of matter whose physical behaviours are dictated by the robust mathematical structures found in topology. The smaller-than-microscopic pieces combine in unusual ways; those combinations then build on each other and lead to the emergence of new and powerful behaviours. Topological insulators, for example, are materials that have properties of both insulators and conductors. Some minerals, meanwhile, have been found to exhibit the unusual properties of a quantum spin liquid, which hosts particle-like objects that are neither bosons nor fermions.

Some of these materials already exist in nature. Physicist Paul Steinhardt famously pored through European museum collections and came upon a rock that had exotic properties; he traced the specimen all the way to the Kamchatka Mountains in Russia. Hsieh and collaborators, meanwhile, predicted in 2012 that a material called tin-telluride was a topological crystalline insulator; the idea was experimentally confirmed by multiple groups.

Now, however, Hsieh is taking a different route. Rather than wait for nature to deliver the perfect quantum material, he proposes how we could realize novel phases of matter by designing systems from the ground up.

If that sounds mind-bending, that’s because it is. “It’s like a quantum form of Legos, except you cannot really see the pieces,” he explains. “You can only describe them mathematically. It’s very fun, in that sense. You can get surprising results that you couldn’t envision beforehand.”

Putting the pieces together

If you’re wondering: yes, Hsieh played a lot of Lego as a child, often tossing aside the instruction manual to devise his own creations. He also loves playing violin, and considered pursuing music or math before physics won his heart.

It was actually at Perimeter that Hsieh cemented his decision to pursue physics. In 2006, shortly after finishing high school in Los Angeles, he attended Perimeter’s International Summer School for Young Physicists. Perimeter Faculty member Freddy Cachazo taught a course on the basic elements of group theory. “It definitely stood out,” Hsieh says now. “That reinforced my interest in physics.”

He went on to get a PhD from MIT and worked as a postdoctoral fellow at the Kavli Institute for Theoretical Physics at Santa Barbara. Now, with his appointment to Perimeter’s Faculty, Hsieh is co-leading the Institute’s Quantum Matter Initiative and developing close ties with experimentalists at the Institute for Quantum Computing at the University of Waterloo.

“With astronomy, you just have to tell a person to look up to the sky, or for high energy, there’s this idea of looking at things in the most microscopic level,” he says. “But condensed matter theory, it’s not obvious. It requires more effort to describe to someone, this idea of collective behaviour.”

One could point to the ocean, perhaps, and use an analogy about how the collective behaviour of droplets of water produces waves.

Or one could dump a whole lot of Lego pieces onto the floor and invite the players to imagine what might happen if the pieces exhibited quantum properties, like superposition and entanglement. No instruction manuals. Just pure imagination and potential.

“You have these building blocks that you understand very well, and you know essentially how they interact with each other, but the novelty comes from the emergent behaviour from this collection,” he says. “It allows for a lot of creativity in how you put these systems of many particles together.”