A team of Canadian researchers has announced the first detection of a fast radio burst that repeats with predictable frequency.

A team of Canadian researchers is one step closer to cracking one of the hottest modern astrophysical mysteries. In a paper published this June in Nature, the CHIME FRB Collaboration announced the detection of a fast radio burst (FRB) that repeats on a regular, periodic basis.

First discovered in 2007, FRBs are bright, ultra-brief radio signals that originate from outside our galaxy. Their cause is as-yet unknown, largely because it’s hard to solve a puzzle with missing pieces: over more than a decade following the discovery of the first FRB, only an additional 25 were detected; of those, just one seemed to repeat itself, but only at irregular intervals.

The puzzle pieces are now pouring in thanks to an innovative radio telescope in Penticton, BC. Nestled in a valley far away from interfering signals, the Canadian Hydrogen Intensity Mapping Experiment, or CHIME, takes a wide-angle view of the sky. Originally designed for other studies, CHIME has become a powerhouse in FRB detection thanks in part to clever software design and algorithms pioneered by Perimeter Faculty member Kendrick Smith. The software enables CHIME to sift through a torrent of data in real time in order to pick out the millisecond flashes of FRBs.

“With a relatively small team of people on a modest budget, CHIME has become the most powerful telescope in the world for finding new FRBs,” said Smith, who holds the Daniel Family James Peebles Chair in Theoretical Physics at Perimeter.

In January 2019, shortly after the pre-commissioning phase, CHIME announced 13 new FRB detections, including a repeater. In August 2019, they announced a larger batch, including eight new repeaters. And in January of this year, the location of one of those FRBs was pinpointed – the closest one to Earth found so far.

Scanning the list of discoveries since CHIME started its FRB hunt, it seems as though the FRB team – a collaboration involving more than 50 researchers, including Smith, Perimeter computational scientist Dustin Lang, Associate Faculty member Ue-Li Pen, and PhD students Utkarsh Giri and Masoud Rafiei-Ravandi – has found the edge pieces to the puzzle.

Each new observation helps narrow down possible causes. Repeaters, for example, cannot be caused by one-time “cataclysmic” events, like the merger of two black holes. Whether a repeating burst is sporadic and irregular or predictable and periodic provides further astrophysical clues to the burst’s origin.

The new periodic repeater, dubbed FRB 180916.J0158+65, has a period of 16.35 days and is the most active source in the published CHIME FRB sample. The reliable pattern means that CHIME can continue to watch its bursts to determine if the properties change over time, providing further information about the environment in which its source lives.

“It seems to have ‘on’ times and ‘off’ times, where the ‘on’ time lasts about four days and the ‘off’ time about 12 days,” Lang said. “During that four-day time when it’s active, or ‘on,’ we get to observe it once a day for about 20 minutes as it passes above the CHIME telescope. During these transits, we might see one burst, or several, or none.”

The team offered some theories to explain the periodic nature of the bursts. Many of the hypotheses invoke neutron stars, which are the compact, ultra-dense remnants of exploded massive stars. Particularly promising are the active subtypes of neutron stars: pulsars, which emit beams of radiation along their magnetic poles, and magnetars, which have ultrapowerful magnetic fields.

One hypothesis holds that a pulsar or magnetar orbiting a companion object (perhaps a star or a stellar remnant) could emit the pulses, with the angle of its orbit shooting one toward Earth every 16 or so days. Or it could be that the activity is triggered when the neutron star passes through an asteroid belt or stellar wind.

Systems with a massive star and a pulsar are also known to produce X-rays and gamma rays, so peering at the location using other telescopes could provide important diagnostics to pin down the nature of the bursts. The team notes, however, that the staggering 485-million-light-year distance to the source may pose a challenge.

“This detection, a repeating FRB that we can track with some regularity, suddenly opens the door to a number of other follow-up observations. That’s really going to be the key to differentiating between the numerous theories as to the origin of these bursts,” Smith said.

The pace of discovery promises to accelerate in the next several years as technology developed for CHIME will be used to build even more powerful telescopes. Currently, the CHIME team is building a system of “outrigger” telescopes, located thousands of kilometres from the main CHIME site. The outriggers will improve the telescope’s resolution by about a factor of 10,000 and enable CHIME to pinpoint the precise locations of FRBs, tracing them back to the galaxies where they originate.

Another telescope, dubbed CHORD (the Canadian Hydrogen Observatory and Radio-transient Detector), is currently being designed by a consortium of Canadian universities, including Perimeter.

“CHORD is going to be 10 times more powerful than CHIME,” said Smith. “This will open new horizons for exploring mysteries in cosmology and astrophysics.”

“CHIME is a remarkable Canadian success story that is transforming our understanding of FRBs. At Perimeter, we’re of course proud to be contributing to that success,” said Perimeter Director Robert Myers. “We’re looking forward to what new mysteries they’ll uncover next.”

CHIME/FRB is a collaboration of over 50 scientists led by the University of British Columbia, McGill University, Perimeter Institute, the University of Toronto, and the National Research Council of Canada (NRC). The $16-million investment for CHIME was provided by the Canada Foundation for Innovation and the governments of British Columbia, Ontario, and Quebec, with additional funding from the Dunlap Institute for Astronomy and Astrophysics, the Natural Sciences and Engineering Research Council, and the Canadian Institute for Advanced Research. The telescope is located in the mountains of British Columbia’s Okanagan Valley at the NRC’s Dominion Radio Astrophysical Observatory near Penticton. CHIME is an official Square Kilometre Array (SKA) pathfinder facility. 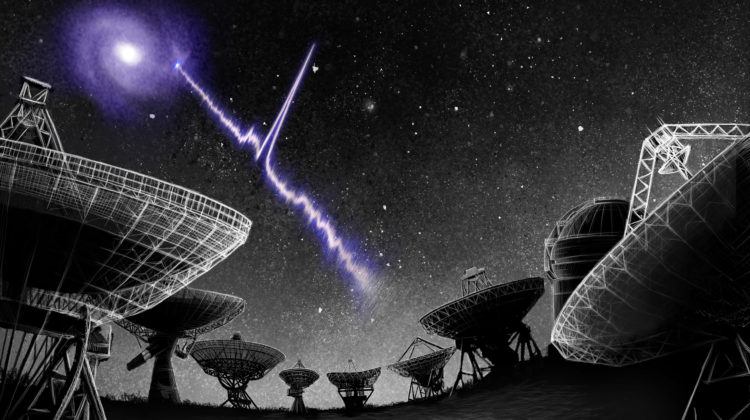 For the first time, a repeating fast radio burst first detected by CHIME has been pinpointed to its galaxy of origin.