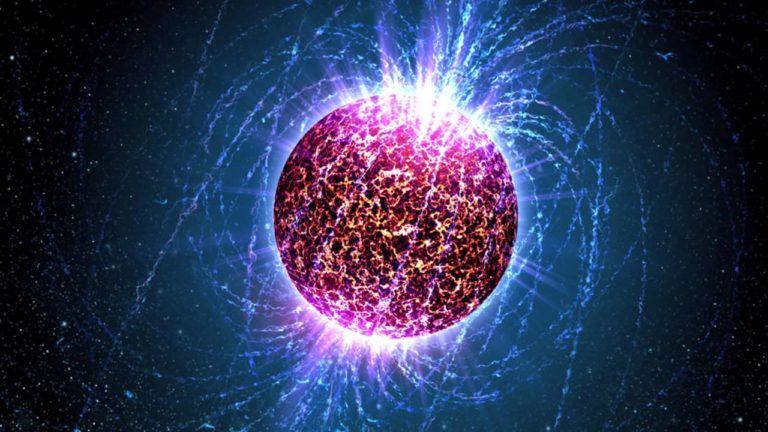 What is the sound of a pulsating neutron star? The answer (at least in a certain theory of gravity) is a high-pitched D note, just one key past the end of a standard piano.

And if that tone is one day “heard” by gravitational wave detectors such as LIGO, it could have repercussions for our understanding of the nature of gravity.

New research by Perimeter Institute postdoctoral fellow Nestor Ortiz, with collaborator Raissa Mendes at Instituto de Física, Universidade Federal Fluminense in Brazil, shows that neutron stars will oscillate with different frequencies depending on which theory of gravity is used as a framework.

The extremely compact nature of neutron stars, which pack up to three times the mass of our sun into a volume with a diameter roughly the length of Manhattan (about 20 kilometres), make them ideal laboratories for testing how gravitational theories fare in “strong gravity” environments.

In their paper, published in Physical Review Letters, the pair tested two theories of gravity: the reigning gold standard, general relativity – which has stood up remarkably well through a gauntlet of experimental verification since Einstein proposed it more than a century ago – and a slight modification to general relativity known as scalar-tensor theory.

“General relativity is a geometric theory of gravity,” says Ortiz. “The mathematical object that describes the geometry of spacetime is called the metric tensor.”

Scalar-tensor theory utilizes the metric tensor to describe spacetime, but it also uses an additional component called a “scalar field” (a function that assigns a numerical value to each point in spacetime, though the physical interpretation depends on the context) that affects the interaction between matter and spacetime.

The researchers modeled neutron stars within each theory, and then gave each star a virtual nudge (i.e. modeled what would happen if the system were perturbed). Using independent numerical and analytical methods, they calculated the resulting frequency of vibrations. The process is akin to striking a tuning fork and listening to the note that it makes.

They discovered that the stars in scalar-tensor theory sing with a set of frequencies completely different – and, importantly, completely distinguishable – from those predicted by general relativity.

“When you work out the frequencies of radial oscillations of neutron stars, then you find out new oscillation frequencies of much lower frequency than those predicted by general relativity,” explains Ortiz. For gravitational wave detectors, the two signals would be as different as a soprano voice is from a bass.

“The interaction of these two fields [the metric tensor and the scalar field] is what makes these oscillation modes emerge,” he says.

“The important thing about this is that if we eventually manage to detect those, that would mean that Einstein’s theory would need to be modified. On the other hand, if detections systematically show the absence of these oscillation modes that we are predicting, then that would point to keeping general relativity as our best candidate as a theory of gravity.”

“I don’t want to say that GR would be wrong, in the same sense that Newton’s gravity is not wrong,” he says. “It works almost perfectly at the level of the solar system, and was even able to predict the existence of the planet Neptune. But as you go to a different regime, where things are more massive, more compact, then Newton’s theory needed corrections – and that’s where Einstein came in and constructed a totally new paradigm with a geometric theory of gravity. It could be the case that in the interior of neutron stars the theory still needs some modification in order to explain phenomena that we haven’t observed yet.”

Although scalar-tensor theory was first proposed more than five decades ago, the unique family of neutron star vibration modes remained unknown until recently because of the difficulty of solving the equations that govern the perturbations.

“Solving these equations is tricky and it’s very messy, so most researchers assume a certain simplification called the Cowling approximation,” Ortiz says. In it, the scalar field is allowed to oscillate, but the background geometry is fixed.

“That’s what people did before us, and they didn’t see the oscillation modes that we discovered. When you get rid of the Cowling approximation and you allow for perturbations of the spacetime itself, that’s where they show up.”

It may be some time until the observational verdict is in. Although current detectors are sensitive to the frequencies in question, researchers still have to work out the specific signatures to look for.

In the meantime, Ortiz and Mendes have created audio clips to demonstrate what the stars would sound like to the human ear. Using the data from their numerical simulations, they extracted the frequencies of the oscillations, amplified them, and stretched their duration (the whole ringdown process takes a mere 35 milliseconds, far too fast to be audible).

While the sounds may not be particularly melodic, the difference between the two is clear: in general relativity, the neutron star emits a high-pitched whine, whereas in scalar-tensor theory the star hums with a distinctly lower frequency.

“It’s not on the piano,” Ortiz says of the scalar-tensor frequency. “It’s just one key more at the end of the piano. But it’s almost there. It’s very high pitched. I would have loved to have it on the piano keys, so I could hit a key and say, ‘this is how a star sounds.'”

Listen to the difference between the theories here: