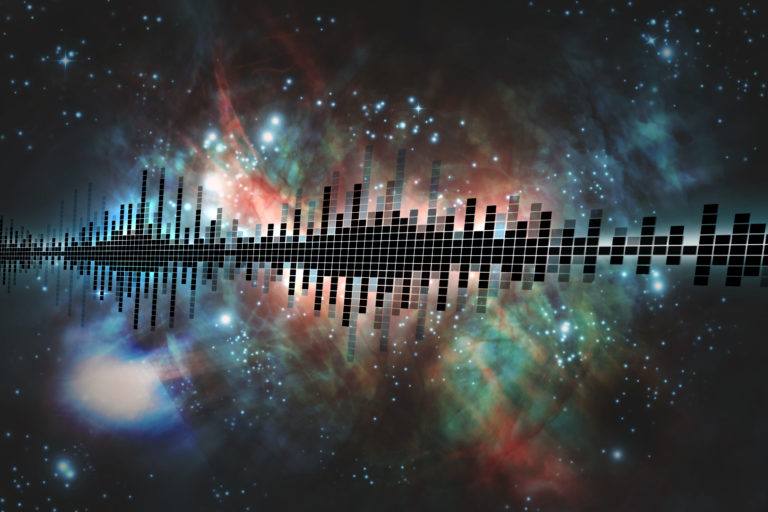 Ever wondered what our universe sounds like? If you were floating out there in space, you wouldn’t hear much, for at least two important reasons:

1. With no air in space, there’s nothing for sound waves to propagate through;
2. There’s a good chance that, if you were floating about in space, you’d be dead.

Such pesky details aside, it is indeed possible for scientists to simulate the sounds of space by translating radio emissions and other signals into sound waves. The sounds they create can be jarring, eerie, and often strikingly beautiful. So put on some headphones, tune in, and space out to the music of the cosmos.

While it may sound like birds and bugs whistling in a dense rainforest, the “chorus” is actually radio waves in Earth’s magnetosphere caused by electrons spiralling speedily through the Van Allen radiation belt. The signals are captured by instruments on the Van Allen Probes, a pair of satellites orbiting Earth since their 2012 launch.

It was the chirp heard around the world. In 2015, LIGO detected the collision of two black holes, sparking the dawn of gravitational-wave astronomy. The team converted the signal from the gravitational waves into sound waves and, to make the chirp more distinct, raised the pitch so we could all hear the soundtrack of a 1.3-billion-year-old cataclysm. Astrophysicist Janna Levin played the chirp and explained its significance in her 2017 Perimeter Institute Public Lecture.

The Sound of Solar Flares

Staring at the Sun is a very bad idea. Listening to it, however, is pretty cool.

The Sun regularly belches emissions of charged particles and electromagnetic waves as solar flares, which can cause auroras and garble radio transmissions. Amateur astronomer Thomas Ashcroft captured the audio implications of one such flare in 2013. In this clip, you can hear a human radio transmission (likely ham radio) suddenly drowned out by the whoosh of interference from a solar flare.

In 2011, as NASA’s Stardust spacecraft zoomed past the comet Tempel 1, the instrument’s protective shield was hammered by dust and other debris from the comet. The spacecraft’s Dust Flux Monitor Instrument captured sound and electrical impulses from the onslaught. The clip below conveys just a fraction of the full bombardment, which resulted in more than 5,000 impacts over 11 minutes.

The Sound of Neutron Stars

Neutron stars are among the universe’s most extreme, fascinating objects (and here are a bunch of reasons why). Some neutron stars emit beams of electromagnetic radiation as they spin, like the beam from a lighthouse pulsing at a certain frequency (hence the name “pulsars”). When converted into sound waves, these pulses can sound like the rat-a-tat of a distant drum or a high-speed whirling hum. Victoria Kaspi of McGill University played some of this “music of the heavens” in her 2016 Perimeter Institute Public Lecture.

When two black holes circle one another, drawn ever-closer in a grand gravitational dance, they squeeze and stretch the surrounding space in a way that would vibrate your eardrum and allow you to hear it (if you were nearby, and somehow remained alive). During her 2017 Perimeter Public Lecture, Janna Levin played several simulations of the sounds you might hear from two black holes twirling toward a merger.

Hearing the Difference Between Theories

Because neutron stars are so compact and gravitationally intense, they are ideal guinea pigs for testing how theories of gravity fare in extreme situations. Perimeter postdoctoral fellow Nestor Ortiz and collaborator Raissa Mendez studied neutron star pulsations to test the prevailing theory of gravity, Einstein’s general relativity, against a modification called scalar-tensor theory. They found a new family of oscillation frequencies that are not predicted by Einstein’s theory – an intriguing development that may necessitate modifications to general relativity if the oscillations are detected experimentally. The researchers created audio simulations that, while not particularly melodic, clearly demonstrate the differences between models.

The Big Bang Itself

In 2003, using data from the WMAP mission, University of Washington physics professor John Cramer released what could be considered the universe’s debut single. A decade later, with data from the European Space Agency’s Planck mission, he put out a remastered version. What you hear is, in a sense, the entire universe – a sound simulation of the first 760,000 years after the big bang, when the universe was dense enough to carry sound waves. The pitch gets lower as the universe expands and becomes less dense.