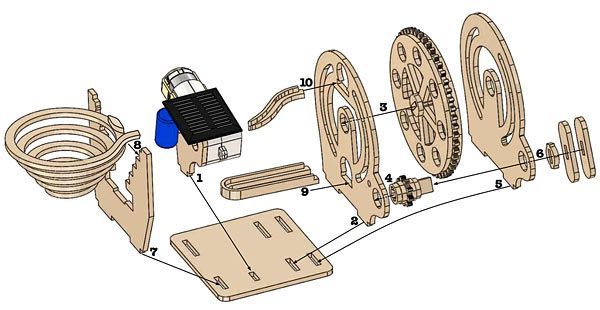 It’s the most wonderful (space)time of the year, but some people are just so difficult to shop for. What do you get for the person who has (a theory of) everything? Here are nine geeky gift ideas for your favourite physics fan.

1. A chunk of space-mineral forged in the cataclysmic collision of neutron stars in the far reaches of the universe

Or, as it is more commonly known, gold. If you’re shopping for a gold necklace or watch for a loved one, keep this awesome fact in mind: much of the gold in our galaxy was likely created by the cataclysmic collision of neutron stars very, very far away. Research published in The Astrophysical Journal in 2018 suggests that these incredibly violent collisions of ultra-dense collapsed stars may be responsible for the majority of gold in our universe. So you can, with some truth, tell your loved one: “I’d give you the stars.”

Erwin Schrödinger composed his famous “cat” thought experiment as a way to demonstrate the counter-intuitiveness of an interpretation of quantum mechanics. It proposes a cat in a box with a random-triggered dose of poison must be considered both alive and dead simultaneously until the box is opened to check. We’re assuming Schrödinger drank plenty of coffee while formulating the idea – as have generations who have pondered it since – so this mug is a fitting tribute.

Though marketed as a toy, this spinning disc has been the subject of multiple scientific papers, since it almost seems to defy gravity. Spoiler alert: as the azimuthal rotation decreases, the disc also undergoes a decrease in amplitude amid an increase in the frequency of the disk’s axial precession senoidal curve. Plus it makes a really cool sound.

Physicists are drawn to chalkboards the way a cat is drawn the black pants you just lint-rollered before work. With chalkboard paint, any room can become a canvas for calculation. Just be sure to clear it with your landlord or boss first.

What better gift for a physicist than a device that seems to defy the laws of thermodynamics? This particular machine uses solar power to keep the marble rolling, so it won’t probably work after our sun explodes in a few billion years. Great fun in the meantime, though.

Price: $50 (glue and sunlight not included)

Newfangled gadgetry aside, there’s still nothing quite like a good book. Here are a few of our recommendations:

Price: Priceless (but starting at about 10 bucks)

Specifically, a CHF 200 note, which bears imagery commemorating CERN and the discovery of the Higgs boson at the Large Hadron Collider. The geeky greenbacks were in introduced last August and will be phased-in over the next few years.

Cost: About CAD $270, give or take depending on market fluctuations and such

These things are all physics. Who wouldn’t want to spend an inordinate amount of time building an unnecessarily complex contraption to perform a meaningless task? Nobody, that’s who.

Price: Cheap (homemade with popsicle sticks and a marble) to kinda pricey (this starter kit) to holy-smokes-that-must-have-taken-forever-and-cost-a-fortune

Bring beauty and inspiration to any dorm room, bedroom, office, lounge, particle accelerator, or other space where science-lovers hang out with our free posters. We’ve got posters about dark matter, black holes, pioneering women in physics, general relativity, and lots more. Did we mention they’re free?