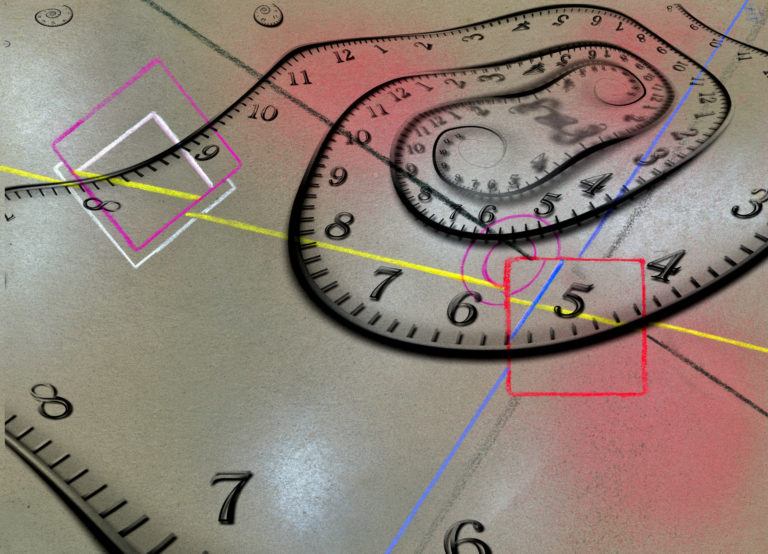 With summer school and the tail end of the academic year wrapped up at Perimeter, we’re ready for a fresh fall start. Here are a few highlights, from a Governor General’s award to a global graduation.

Postdoctoral researcher Flaminia Giacomini and her former colleagues at the University of Vienna discovered that when quantum and gravitational ideas about time are combined, time can become uncertain. Events may not happen at precise times, and the order in which they happen may be in doubt. “There’s a problem with time,” she says. Their paper recently appeared in the prestigious journal Nature Communications.

2. An innovation award for CHIME

A team of Canadian researchers has been awarded the 2020 Governor General’s Innovation Award for designing and constructing a novel radio telescope that has already delivered spectacular results. Involving more than 50 scientists from Perimeter Institute, McGill University, University of British Columbia, University of Toronto, and the National Research Council of Canada, CHIME (Canadian Hydrogen Intensity Mapping Experiment) is the first new Canadian telescope in decades. Planning is underway for a second, smaller CHIME telescope to be built on a cattle ranch 85 kilometres away from the original one in Penticton. Construction could start as soon as this winter.

Rowan Thomson has been named Assistant Dean (Equity, Diversity and Inclusion) in the Faculty of Science at Carleton University. A professor at Carleton’s Laboratory for Radiotherapy Physics and Medical Physics Group, and a Canada Research Chair, Thomson has been researching improvements to cancer radiation treatments for over a decade. She studied string theory as a PhD student at Perimeter Institute and the University of Waterloo, graduating in 2007.

Sherry Suyu (Max Planck Institute for Astrophysics & Technical University of Munich) will receive the 2021 Lancelot M. Berkeley-New York Community Trust Prize for Meritorious Work in Astronomy for her leadership of the H0LiCOW collaboration, which is measuring the cosmic expansion rate using gravitationally lensed quasars. Suyu is a Visiting Fellow at Perimeter Institute and was a Simons Emmy Noether Fellow in 2018/19.

The Sloan Digital Sky Survey has released a comprehensive analysis of the largest 3D map of the universe ever created. At the heart of the new results are detailed measurements of more than two million galaxies and quasars, covering 11 billion years of cosmic time. For Perimeter Associate Faculty member Will Percival, a key member of the collaboration’s leadership team, the work represents the culmination of 15 years of work. Percival is also the Director of the Waterloo Centre for Astrophysics at the University of Waterloo. Filling in the most significant gaps in our possible exploration of the universe’s history, the story received widespread coverage on CTV, CBC, CNN, Forbes, and many other mainstream and science news outlets.

A new book, The Shadow of the Black Hole by Perimeter senior research affiliate John Moffat, is now available from Oxford Press. Called “a compelling survey of both the history of theoretical gravity and key new developments in observational astronomy,” the book is a narrative explanation of black holes, with new insights into gravitational waves.

Former Simons Emmy Noether Fellow Katie Mack, an Assistant Professor at North Carolina State University, has published her book The End of Everything (Astrophysically Speaking). The book provides an accessible (and surprisingly entertaining) tour through five possible ways the universe could end. Read the review in The New York Times, where it was also named one of 13 Books to Watch for August.

Travel is out but collaborative research is still in. Perimeter continues to host its renowned conferences, with increasing numbers of participants. What are the pros and cons of conference connections during COVID-19?

Congratulations to 1QBit, a world leader in advanced computing and software development which has announced the launch of a chest radiography tool called 1QBit XrAI. They have received Health Canada approval for this diagnostic tool, which is expected to help clinicians better identify patients with respiratory complications. 1Qbit is also a partner in PIQuIL, the Perimeter Institute Quantum Intelligence Lab.

The American Physical Society has generously provided a grant from its COVID-19 Innovation Fund that will help expand access to modern physics resources in high schools throughout Latin America. The grant will support Spanish translations of 15 volumes of educational material developed by Perimeter, so they can be used online during the pandemic and in classrooms when schools reopen. Perimeter’s free educational resources are all available online.

Like many students around the world, Perimeter Scholars International (PSI) Class of 2020 finished up their studies online this year. In July, the 13 women and 13 men from 17 different countries gathered for an online graduation ceremony that featured three Nobel Laureates, including University of Waterloo’s Donna Strickland. This month, Perimeter welcomes a new class of PSI students, who will be taking their first semester online.

This year’s International Summer School for Young Physicists also took a virtual form this summer. A gender-balanced class of 40 exceptional high school students from Canada, the US, and Brazil worked together in surprising and collaborative ways to learn about modern physics during the two-week program – and one student is using his newfound problem-solving techniques to tutor others.

Meanwhile, the Indian Institute of Technology–Bombay held its convocation in virtual reality mode, with a personalized avatar of each graduate receiving their degree certificate. Chief Guest at the ceremony was Duncan Haldane, co-recipient of the 2016 Nobel Prize in Physics, and a former Distinguished Visiting Research Chair at Perimeter.

Last but not least: To mark both the start of the academic year and the release of Taylor Swift’s new album, Folklore, check out this Twitter thread of Swift’s looks as classic physics textbooks, compiled by a lecturer at Simon Fraser University.