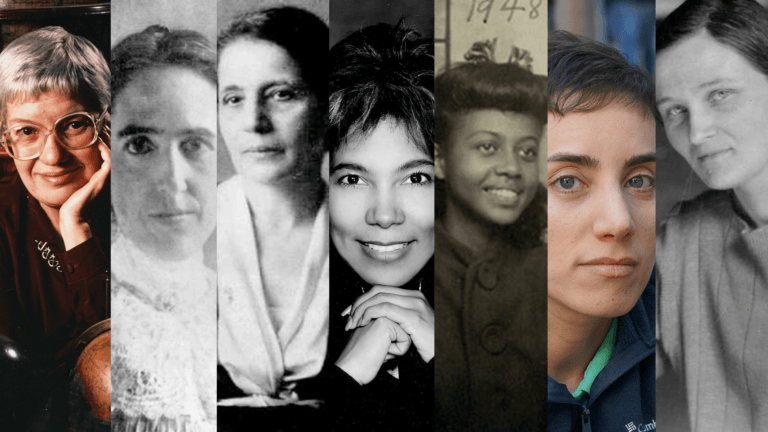 by Eamon O'Flynn / Perimeter Institute for Theoretical Physics
on Dec 07, 2017

This fall, we created the “Forces of Nature” poster series to showcase great women in science, many of whom did not get the full recognition they deserved in their lifetimes.

The response has been so positive – the free posters have been downloaded and displayed in classrooms and schools, and shared by journalists, political leaders and many more – we are planning a second set.

But we need your help deciding who to include.

Thanks to many suggestions from our readers, we have compiled a shortlist of great women we could celebrate in the next set of posters. Look through the list below and CAST YOUR VOTE on which scientist you would like to see in our next set of posters. Voting will remain open until January 10, 2018.

(One caveat: in some cases, we will need to seek the blessing of families of these women; we shall do our best, but no promises.)

Here are the contenders:

Vera Rubin was a legendary astronomer and physicist who uncovered the galaxy rotation problem, the strongest evidence yet for dark matter. This discovery has driven physics theory and experiment for more than 40 years.

Maryam Mirzakhani was a brilliant mathematician and a winner of the prestigious Fields Medal. Her work on geometric and dynamic complexities of curved surfaces opened new paths of research in theoretical physics, engineering, material science, pure math, and cryptography.

Claudia Alexander was a specialist in geophysics and planetary science, the last project manager of NASA’s Galileo mission to Jupiter, and served as project manager and scientist for NASA’s role in the European-led Rosetta mission.

Lise Meitner was a pioneer in the fields of radioactivity and nuclear physics. Her work helped discover and build a working understanding of nuclear fission, which led to a Nobel Prize for Otto Hahn. Albert Einstein glowingly referred to her as the “German Marie Curie.”

Vivienne Lucille Malone-Mayes was one of the first African-American women to earn a PhD in mathematics who, despite facing persistent racism, went on to have a long and distinguished research career. An active participant in the civil rights movement, Malone-Mayes fought racism and sexism throughout her career.

Cecilia Payne-Gaposchkin was an innovative astronomer whose career included studies of stellar composition, the structure of the Milky Way, and the study of more than 3 million variable stars. Her work helped bring female astronomers into the mainstream, and her PhD thesis was once called “the most brilliant ever written in astronomy.”

Henrietta Swan Leavitt was an astronomer who received little recognition in her lifetime, but forever changed our understanding of the universe. It was Leavitt’s work that allowed astronomers to measure the distance between the Earth and faraway galaxies, and made Edwin Hubble’s work on the expanding universe possible.

Update: We detected suspicious voting activity on December 7 and 8, and our team has adjusted the totals accordingly. We appreciate the enthusiasm for supporting women in science, but please limit yourself to one vote per day.

Create your own user feedback survey

One Reply to “Vote now: Who should be next in our ‘great women in science’ series?”